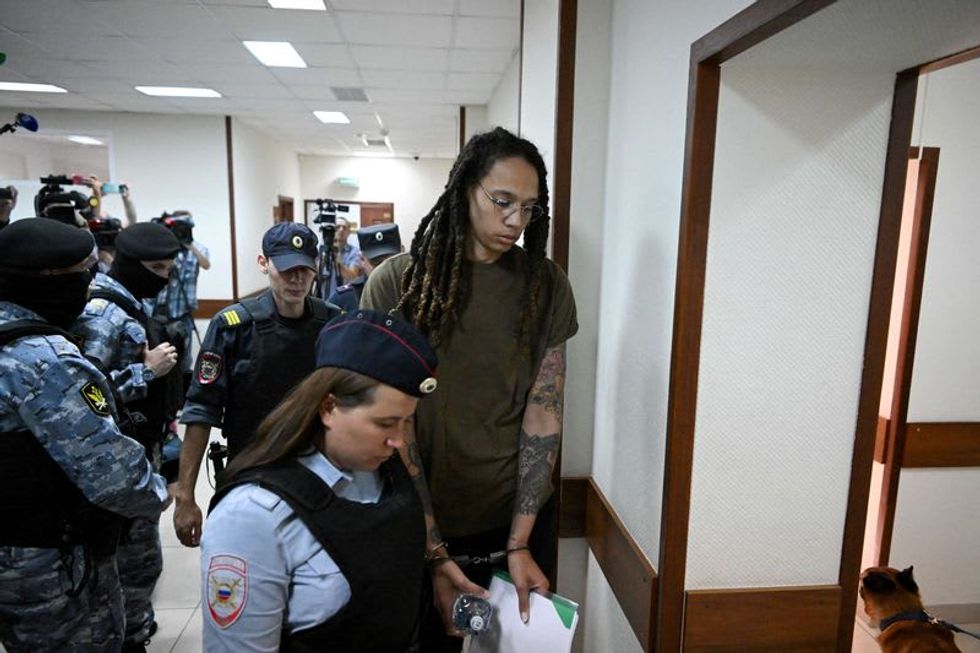 KHIMKI, Russia (Reuters) - U.S. basketball star Brittney Griner returns to a Russian court on Thursday as her drugs trial grinds towards a finale that could result in a 10-year prison sentence and then a prisoner swap for one of the world's most notorious arms dealers.

Cannabis is illegal in Russia for both medicinal and recreational purposes.

The cartridges threw the 31-year-old Texan athlete into the geopolitical maelstrom triggered when President Vladimir Putin sent troops into Ukraine on Feb. 24.

During the most strained U.S.-Russian relations since the 1962 Cuban missile crisis, U.S. President Joe Biden is under pressure to intervene on behalf of detained Americans - including Griner.

The United States has said Griner was wrongfully detained and made what Secretary of State Antony Blinken called a "substantial offer" to Moscow to exchange Russian prisoners for American citizens held in Russia, including Griner and former Marine Paul Whelan.

Russian officials have said a deal has not been reached. They argue that Griner -- known as "BG" to basketball fans -- violated the country's laws and should be judged accordingly.

The Kremlin has also repeatedly warned Washington against resorting to megaphone diplomacy, or negotiations conducted through press releases. They say this strategy could derail the swap.

Griner's lawyer said on Tuesday that the trial should end very soon and that once the court renders a verdict, a swap between Russia and the United States would become legally possible.

Griner, who pleaded guilty but denied intending to break Russian laws, has shown little emotion in court. Her lawyer said on Tuesday that Griner was both nervous and focused as the trial neared its end.

Wearing round-rimmed glasses and athletic clothing at every hearing, Griner listened to the proceedings via a translator and spoke quietly to her lawyers through the bars of the defendant's cage at the Khimki District Court outside Moscow.

Before taking a seat, Griner held up personal photographs, including many of her wife Cherelle, whom Biden called last month to assure that Washington was working to secure Griner's release.

Griner, selected first overall by the Phoenix Mercury in the 2013 WBNA draft, had flown to Russia to join her team, UMMC Ekaterinburg, for the playoffs after spending time at home in the United States.

In her testimony last week, Griner expressed puzzlement as to how the vape cartridges had ended up in her luggage.

Griner had been prescribed medical marijuana in the United States to relieve pain from chronic injuries, a treatment method that is common among elite athletes because it has fewer side effects than some painkillers.

(Reporting by Reuters; editing by Guy Faulconbridge and Josie Kao)