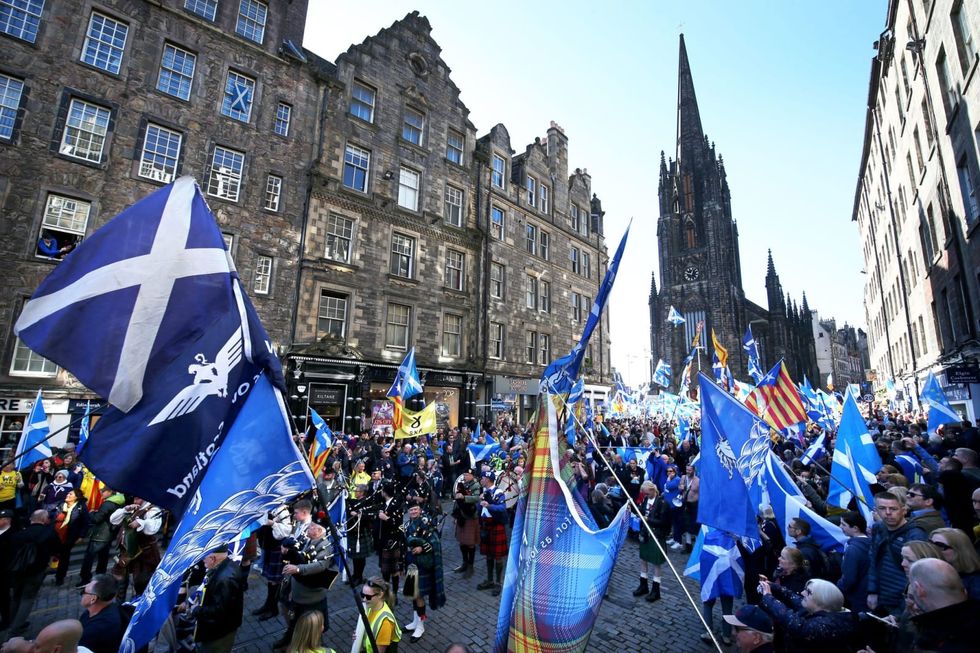 Bye, London: The young Scots who want independence from Britain - Supporters of Scottish independence take part in a demonstration in Edinburgh in 2018. The governing Scottish National Party has promised a referendum if it wins a majority in upcoming elections. - Jane Barlow/PA Wire/dpa

Michael Gray wants out. As soon as possible.

The 29-year-old lawyer-to-be is fighting for Scottish independence and believes Brexit has shown that it's time for another vote on leaving Britain.

He's certain: "Scottish results didn't really play a role" in the 2016 Brexit referendum, as a clear majority of 62 per cent of Scots voted against leaving the European Union. Many Scots, including Gray, therefore want another vote on whether Scotland should leave Britain.

The governing Scottish National Party (SNP) has already promised a second vote on independence if the party wins a majority in upcoming parliamentary elections. A previous referendum in September 2014 had seen Scotland remain after a slight majority - 55 per cent - voted in favour for it to stay with England, Wales and Northern Ireland.

Gray - who lives in Edinburgh and is the co-founder of Skotia, a journalistic, multimedia start-up with a clear pro-independence stance - is no exception among the younger generation of Scots.

In a recent opinion poll, over 60 per cent of under-35-year-olds were in favour of Scottish independence, while among those over age 45, a majority was against it.

"The under-50s in most polls are pro-independence, and that's been the case for quite a while," says Kristy Hughes from the Scottish Centre on European Relations. "And it's not just teenagers being radical." At times, the share of Scots in their 20s and 30s in favour of independence was even higher than among teenagers.

"I have always thought that it would make sense for Scotland to be a separate country," says the 25-year-old, who was born in Germany and considers himself a "German Scot."

Bayer moved to Scotland in 2015 for his undergraduate studies, after he had migrated to England with his mother.

Brexit also meant a turning point for him.

Before the vote, Bayer had campaigned for the Remain camp with other volunteers, talking to people about the European Union in different cities, which was "fascinating," he says.

While immigration and the health care system played a major role in British media coverage of the Leave campaign, totally different issues had been at stake for the Scots - such as fishing quotas or public transport.

While a slim majority had voted against leaving Britain in 2014, many believe that Brexit has given the pro-independence movement a new boost. For the SNP, the Brexit results are a central argument for another referendum. "There's a strong correlation between high support for EU and high support for independence," Hughes says.

Especially the younger generations, who grew up with the European Union, valued the liberties provided by being a part of the bloc, she adds. Whether young Scots want to study, travel or work abroad, Brexit has made all these things more complicated.

The Brexit referendum also mirrored the gap between young and old: If only the younger half of the British population had been able to vote, Brexit would never have happened.

The younger generations grew up with more Scottish self-determination than their parents and grandparents did, Hughes says.

The regional governments of Scotland, Northern Ireland and Wales have been gaining more and more independent power since 1998 – which also explains the different steps taken to fight the coronavirus pandemic.

"Younger people have grown up with that stronger sense of Scotland as a country. Devolution has really added to that," Hughes says.

Gray recalls that there is still a feeling of British national sentiment among his grandparents' generation that he himself isn't familiar with among peers. Those who experienced how the British government rebuilt houses after World War II and built up the state health system feel a stronger sense of belonging, he adds.

But what will happen if the SNP really does win the upcoming elections? So far, London has been very clear that it will try to prevent another referendum on independence by all means.

Prime Minister Boris Johnson uses all opportunities to point out that the United Kingdom is strongest together. That said, however, the clearer the election result, the greater the pressure on London.

Gray, at any rate, firmly believes Scotland can make it out this time: "From a pro-independence perspective, there are many reasons to be hopeful."