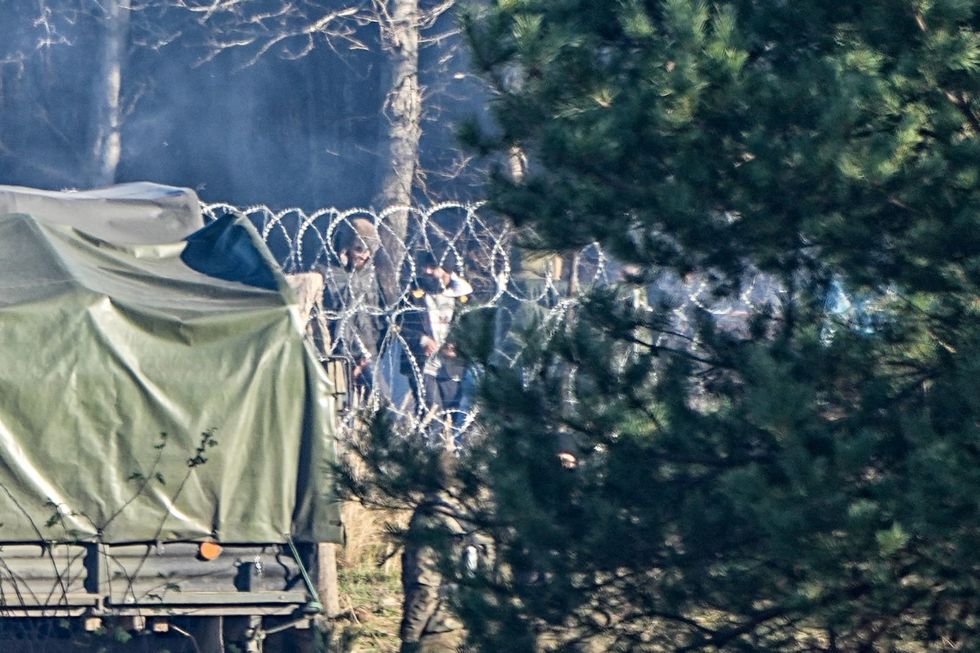 Migrants stand behind the barbed wire border between Poland and Belarus near the Kusnica border crossing. The migration crisis at the Poland-Belarus border with refugees trying to enter the European Union via Belarus worsened on Monday, with Belarusian authorities saying that many hundreds of migrants had arrived at the border, and Poland reporting that some had already tried to break through. Michael Kappeler/dpa

Chaotic scenes were reported from the Polish-Belarusian border on Wednesday, hours after two large groups of migrants that had been stopped from moving further westwards reportedly broke through into Poland.

Polish officials then reported that members of the Belarusian security forces had fired their weapons, apparently in an attempt to scare the massed migrants. The Polish Defence Ministry released a six-second video clip on Twitter in which a shot can be heard, followed by screams.

It also said reported that Belarusian officials were exercising violence against the migrants.

Poland is refusing to let the migrants onto its territory and has sent hundreds of reinforcements to the border in recent weeks. It has also erected a barbed wire fence, in an effort to stop any attempts by migrants to break through.

Belarusian leader Alexander Lukashenko demanded on Tuesday that they be allowed through into Poland. He said in an interview they mainly wanted to settle in Germany, not Poland.

The European Union has accused Minsk of helping migrants trying to reach the bloc's external borders in Poland, Latvia and Lithuania, as retaliation for Western sanctions on Belarus for political repression.

Amid the chaos at the border, several dozen people managed to destroy fences close to the villages of Krynki and Bialowieza and to cross the border, Polish news agency PAP reported late on Tuesday, citing the Bialystok local radio station.

The broadcaster cited a border force spokesperson saying that, in both cases, the fences and barriers were torn down.

Some migrants were taken back to Belarus, while others managed to flee, she said.

There are reportedly hundreds of people on the Belarusian side.

Lukashenko, who has been dubbed "Europe's last dictator," has denied deliberately flying people in from nations in crisis like Syria, Afghanistan, Libya and Iraq and then moving them towards the EU border.

The situation prompted exiled Belarusian opposition leader Svetlana Tikhanovskaya to seek out a meeting with German Finance Minister Olaf Scholz, who is in post-election talks that would make him the country's next chancellor.

According to her channel on messaging service Telegram, it was important for her that the EU shows a "unified and resolute position" in its dealings with Belarus on the matter.

She also demanded pressure on Lukashenko, including sanctions. She also said she plans to meet with German President Frank-Walter Steinmeier and other government ministers.

The talks with Scholz also touched on political prisoners in Belarus and the growing repression there. She has repeatedly argued that the border crisis with Poland cannot be separated from the political problems in Belarus.

She also called for an end to the deadly violence at the border.

"The regime carries the full responsibility for this," she said.