Can Republicans maintain Trumpism without Donald Trump in 2022? 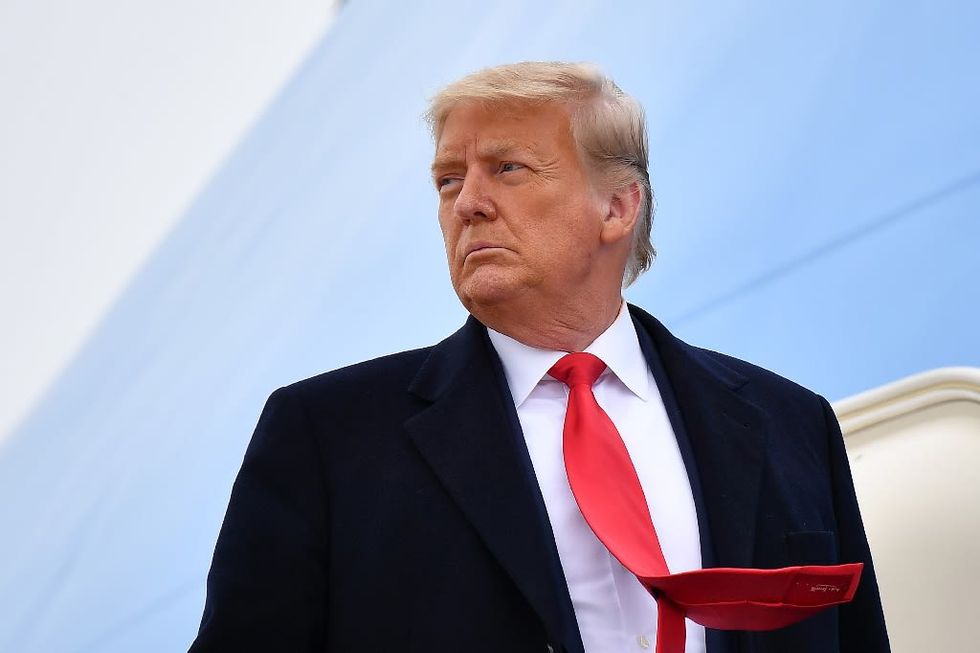 Donald Trump, pictured in his final days in office, is the first president since Herbert Hoover nearly a century ago to lose the House, the Senate and the White House during a single term

Washington (AFP) - As US Republicans cheered impressive gains in state elections in the fall, their leader may not have been so delighted as he followed the results from his fiefdom in southern Florida.

For the results of the gubernatorial races -- victory in leftward-trending Virginia and an unexpectedly narrow defeat in deeply Democratic New Jersey -- proved one thing beyond doubt: Republicans can win without Donald Trump.

Whisper it, but five years after submitting entirely to the will of its mercurial leader, and one year ahead of the crucial midterm elections, the Republican Party is tentatively picturing life after Donald.

"At this stage, he would be the frontrunner if he chose to enter the 2024 presidential race," Matt Lacombe, an assistant professor of political science at New York liberal arts school Barnard College, told AFP.

"But it's also very possible that coordination among potential candidates and party officials... would be sufficient to prevent him from pursuing or succeeding in a second run."

After Trump secured the Republican presidential nomination in May 2016, the party abandoned its policy platform at its next two conventions, instead opting to simply declare fealty to its rambunctious chieftain.

The consensus remains that all paths to Congress go through Mar-a-Lago -- that to succeed in Washington you had to kiss the ring in Palm Beach, flattering Trump and his ultra-loyal base of tens of millions of ardent devotees.

Republican politicians who fail to toe the line know they risk a public dressing down and primary challenge at best and death threats to their families if his supporters were particularly inflamed.

Some prominent Republicans are seizing on the recent governors' races to call for a course correction, however, navigating around Trump and his "big lie" that the 2020 election was stolen from him by the Democrats.

In Virginia, Republican multimillionaire Glenn Youngkin won by far exceeding Trump's 2020 showing in the suburbs, especially among independents and women.

Trump immediately took credit but in reality, Youngkin soft-pedaled the former reality TV star's support and did all he could in the final weeks to keep his high-profile endorser at arm's length.

In New Jersey too, Republican Jack Ciattarelli started out very pro-Trump, even speaking at a "Stop the Steal" rally in 2020, but distanced himself from the ex-president during the campaign proper.

The suburbs are likely to be the key battlegrounds again next year, when the stakes will be control of the House of Representatives and Senate and 36 governorships -- yet Trump is far less popular there than in the countryside.

The takeaway for many Republicans is that borrowing heavily from Trump's playbook while assiduously avoiding the man himself could be the key.

The former president's approval sank to an all-time low of 34 percent after the January 6 insurrection, when thousands of his supporters stormed the US Capitol to stop lawmakers certifying Joe Biden's victory.

Trump has since issued a number of statements praising the insurrectionists and defending their threats on the life of his vice president, Mike Pence.

Senate Minority Leader Mitch McConnell has urged the 75-year-old real estate tycoon to stay out of the midterms, telling reporters: "I do think we need to be talking about the future, and not the past."

Yet Rick Scott, the chairman of the Republicans' Senate campaign committee for 2022, told NBC any Republican would be "foolish" to reject Trump's endorsement -- underlining the dilemma Republicans face.

"Donald Trump is where he wants to be -- the center of attention, a crying child in the candy aisle of a packed grocery store, demanding more soda while he throws bags of candy bars at other children," Peter Loge, an associate professor at George Washington University, told AFP.

"It is difficult to imagine him demurring so that others can have their turn in the spotlight."

'The past is never dead'

Trump's bully pulpit isn't what it was before social media bans effectively curbed his day-to-day influence and, in any case, his electoral secret sauce was never as powerful as he claimed.

Republicans did fairly well down-ballot in 2020 -- keeping their Senate loss to the narrowest possible margin and almost taking the House -- but stumbled at the presidential level.

And Trump is the first president since Herbert Hoover nearly a century ago to lose the House, the Senate and the White House during a single term.

"While Republican primary candidates actively seek his endorsement, valuable in Republican races, that same endorsement can be somewhat dangerous in a general election in that it motivates Democrats to turn out to vote against the Trump-supported candidate."

Loge believes challengers who think they have nothing to lose may emerge, alongside others concerned about the future of the Republican Party and the country.

"The 2022 midterm elections will also go a long way to determining Trump's level of support in 2024," Loge told AFP.

But Trump remains a hero to the millions of disaffected new voters he brought to the Republican cause in 2016, and is credited with remaking the federal judiciary in the image of his right-wing backers.

His deficit-busting tax cuts remain popular among the working classes, although they tilt increasingly toward the mega-rich over the longer term.

"William Faulkner famously wrote 'The past is never dead. It's not even past,'" Mark Bayer, a former chief of staff in the Senate and the House, told AFP.

"The same can be said about Trump's trance-inducing influence over the Republican Party. His grip... is as strong as it was when he was president."