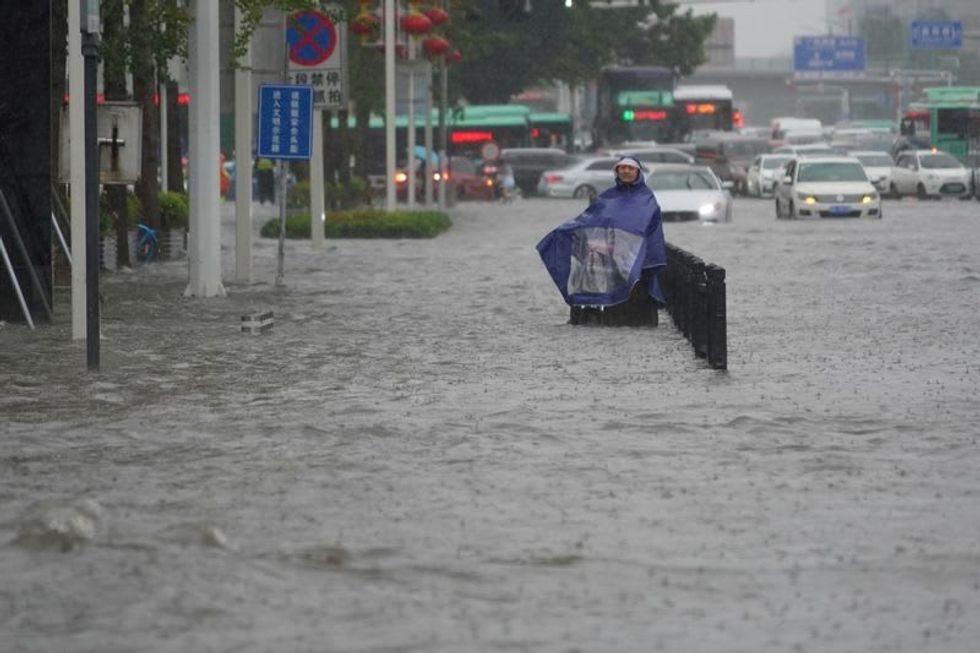 BEIJING (Reuters) -Large swathes of China's central Henan province were under water on Wednesday, with its capital Zhengzhou hardest-hit after being drenched by what weather forecasters said was the highest rainfall in 1,000 years.

In Zhengzhou, a city of over 12 million on the banks of the Yellow River, 12 people have died so far amid the floods, and about 100,000 people have been evacuated to safe zones, the official Xinhua agency reported, citing the local government.

The lives of millions of people in Henan have been upended since the weekend in an unusually active rainy season that has led to the rapid rise of a number of rivers in the Yellow River basin.

Streets in a dozen cities have been flooded, while dozens of water reservoirs and dams breached warning levels.

Overnight, local authorities said the rainfall had caused a 20-metre breach in the Yihetan dam in the city of Luoyang west of Zhengzhou, and that the dam "could collapse at any time".

"Some rivers have exceeded monitoring levels, some dams have broken down, while some railway services have stopped and flights cancelled, causing heavy casualties and property losses," President Xi Jinping said on Wednesday, addressing the situation in a statement broadcast by state television.

From the evening of Saturday until late Tuesday, 617.1 millimetres (mm) of rain had drenched Zhengzhou - almost on par with the annual average of 640.8 mm.

The level of rainfall in Zhengzhou witnessed over the three days was one seen only once in a thousand years, local media cited meteorologists as saying.

Of Henan's 4,098 rainfall measuring stations, 606 have registered more than 250 mm of precipitation since the weekend, with heavy rains expected to persist through Wednesday, the province's chief weather forecaster told domestic media.

Both Henan province and Zhengzhou municipal meteorological bureaus have raised the emergency response for the disaster to level I.

Zhengzhou airport said on Tuesday evening it would temporarily suspend subways and inter-city trains heading to and from the airport, and it would not accept incoming flights from 8 p.m. local time (1200 GMT) on Tuesday to 12 p.m. on Wednesday.

(Reporting by Sameer Manekar in Bengaluru, Josh Horwitz and Jing Wang in Shanghai, and Ryan Woo in Beijing; Editing by Marguerita Choy and Jacqueline Wong)