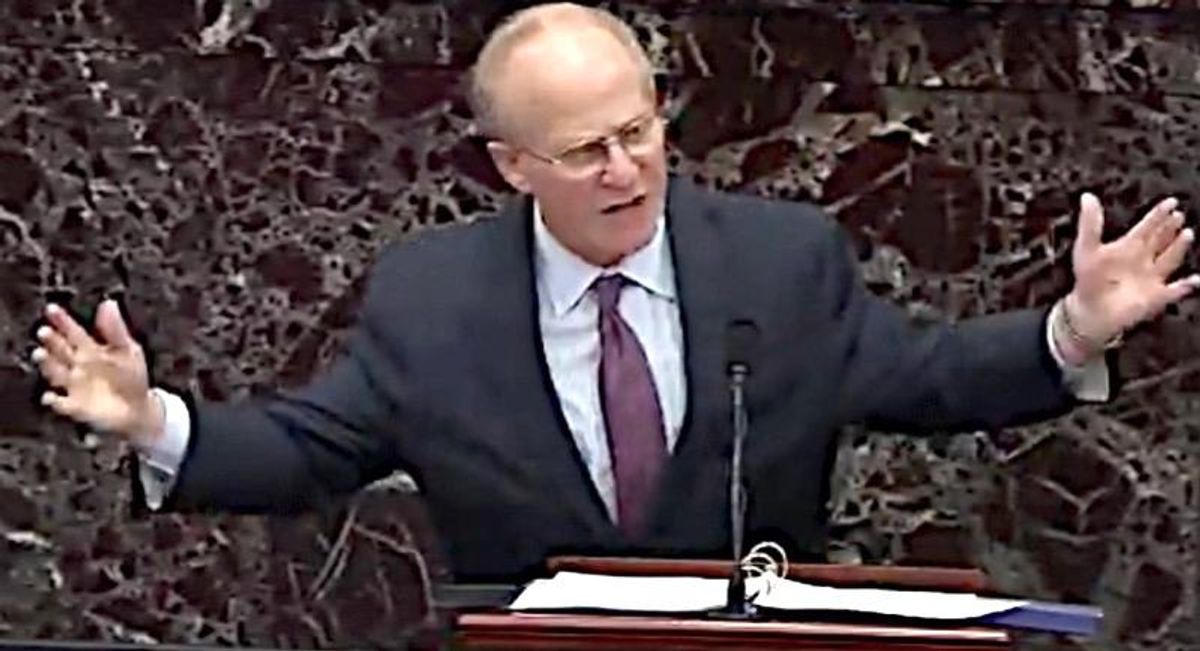 “They tell us that they have to have this impeachment trial – such as it is – to bring about unity - but they don't want unity," Schoen said of Democrats. "And they know this so-called trial will tear this country in half, leaving tens of millions of Americans feeling left out of the nation's agenda, as dictated by one political party that now holds the power in the White House, and , in our national legislature."

"This trial will tear this country apart, perhaps like we have only seen once before in our history."

David Schoen, Trump's impeachment lawyer, claims holding Trump accountable with a trial for inciting the Capitol attack will lead to a division in America comparable to the Civil War. pic.twitter.com/s2GMNt5JGx
— The American Independent (@AmerIndependent) February 9, 2021

Schoen last year told a local Atlanta newspaper, “I represented all sorts of reputed mobster figures: alleged head of Russian mafia in this country, Israeli mafia and two Italian bosses, as well a guy the government claimed was the biggest mafioso in the world."

Experts on Tuesday were stunned upon hearing his threat of civil war.

The president's lawyer basically saying that if you continue with this trial there will be another Civil War
— Tom Nichols (@RadioFreeTom) February 9, 2021

Not sure threatening a civil war is a great tactic when your client is on trial for inciting an insurrection. pic.twitter.com/ark6SZ3bKp
— Andrew L. Seidel (@AndrewLSeidel) February 9, 2021

Wow David Schoen --Roger Stone's lawyer who now reps Trump-is telling us that this trial will cause a literal civil war. He is not warning us- he's threatening us. He's clearly trying to incite anger by Trump supporters.
— (((DeanObeidallah))) (@DeanObeidallah) February 9, 2021

Trump's second attorney suggests that the impeachment trial will divide the country almost to the same level as did the Civil War.
— Philip Bump (@pbump) February 9, 2021

"This trial will tear this contry apart, perhaps like we have seen only once before in the history of our country," says Trump lawyer David Schoen, apparently suggesting that impeaching Trump (for inciting insurrection) will cause another Civil War?
— Jacob Rubashkin (@JacobRubashkin) February 9, 2021

And Schoen's like "Nah, bruh. Hold my beer. I'm gonna threaten civil war if they go through with this." https://t.co/VCw2x79xqX
— Jonah Goldberg (@JonahDispatch) February 9, 2021

I'm not a lawyer, so I totally didn't see the "If you don't drop the charges against our guy who is accused of leading an insurrection, we'll start a civil war, kill every one of you liberal fuckers, and burn down the country" opening argument coming.
— Stonekettle (@Stonekettle) February 9, 2021