Clashes erupt in Montenegro over inauguration of Serbian church head 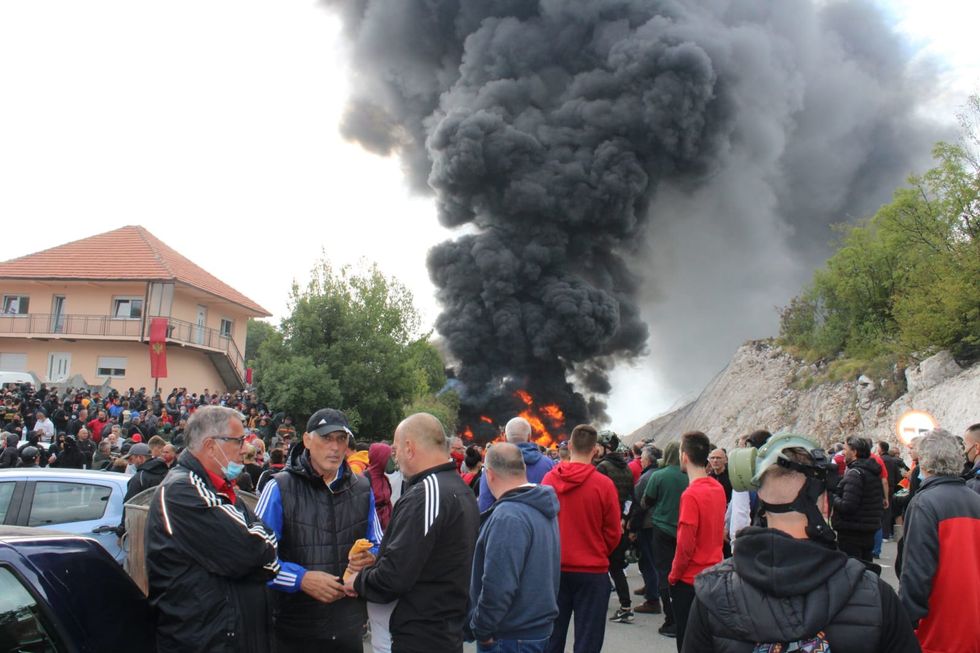 Montenegrin nationalists block an access road to Cetinje, the historical capital of Montenegro, during a protest against the inauguration of the new head of the Serbian Orthodox Church. Hundreds of protesters began gathering on Saturday with the goal of preventing Metropolitan Joanikije from assuming office. The protesters are worried about creeping Serbian influence in their country and have directed their ire at Joanikije. Gregor Mayer/dpa

Clashes erupted between police and protesters blocking the route to Cetinje, the historic capital of Montenegro, who unsuccessfully attempted to thwart the inauguration of the new head of the Serbian Orthodox Church in the country.

Metropolitan Joanikije was ordained at the monastery of Cetinje as 1,800 police officers reportedly stood by to offer protection.

Joanikije and the patriarch of the Serbian Orthodox Church, Porfirije, arrived to and from the ceremony via helicopter, evading the hundreds of people who had gathered on the ground to oppose them.

The main access road leading from the present-day capital Podgorica to Cetinje was a site of violent flare-ups. A dpa reporter saw car tyres piled up, heaps of stones and a semi-trailer extended across the lanes. Men carried gas masks and sticks made of wood or metal.

"We are here to defend ourselves against the occupation by the Serbian church," 40-year-old Ivica told dpa.

Police eventually used tear gas on the protesters to clear the blockade. The crowd set car tyres on fire but otherwise did not continue to resist.

Sixteen people were detained in the protests that began on Saturday while seven police officers were injured, reported the news portal vijesti.me. Protesters had hurled rocks and other objects.

The Montenegrin protesters are worried about creeping Serbian influence in their country and have directed their ire at Joanikije.

He has been serving in the job since last year, after the previous holder, Amfilohije, died of Covid-19 complications. Sunday's ceremony formalized his role.

The decision to have the ceremony in a city Montenegrins associate closely with their national identity drew fury. Additionally, many patriots are suspicious of the church, which denies Montenegro's state identity and regards the small Balkan nation as part of Serbia.

About 30 per cent of its citizens are ethnic Serbs and far more profess allegiance to the Serbian Orthodox Church.