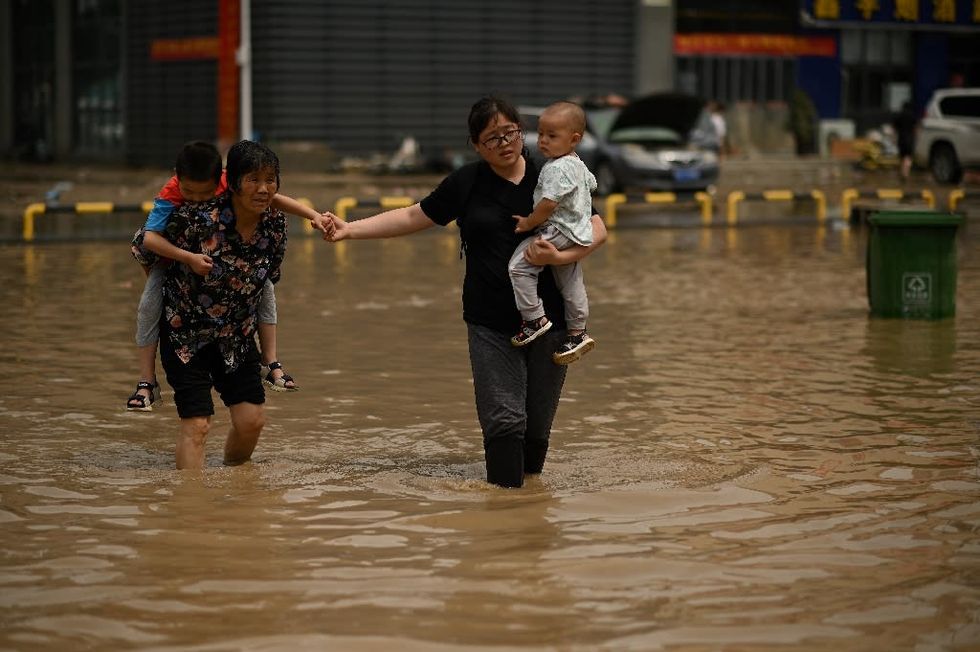 The world is a different place than in 2014, when the UN's Intergovernmental Panel on Climate Change (IPCC) issued its last comprehensive assessment

Paris (AFP) - On the heels of jaw-dropping heat and flooding across three continents, nearly 200 nations gather Monday to validate a critical UN climate science report 100 days ahead of a political summit charged with keeping Earth liveable.

The world is a different place than in 2014, when the UN's Intergovernmental Panel on Climate Change (IPCC) issued its fifth comprehensive assessment of global heating, past and future.

Lingering doubts that warming was gathering pace or almost entirely human in origin, along with the falsely reassuring notion that climate impacts are tomorrow's problem, have since evaporated in the haze of record heat, wildfires and crippling droughts.

Another milestone since the last IPCC tome: the Paris Agreement has been adopted, setting a collective target of capping the planet's surface temperature at "well below" two degrees Celsius (35.6 Fahrenheit) above late-19th century levels.

Carbon pollution from burning fossil fuels, methane leaks and agriculture has driven up the thermometer 1.1C so far.

The 2015 treaty also tacked on an aspirational limit of 1.5C, with many parties to the talks assuming it would remain just that -- aspirational, and thus easy to set aside.

"But then countries turned around and asked the IPCC to do a special report on it, and that changed the framing absolutely," IPCC lead author and palaeoclimatologist Peter Thorne of Maynooth University in Ireland, told AFP.

The resulting 2018 analysis revealed just how devastating an extra half-degree of warming would be, and today 1.5C is the only number on the table.

"It became the de facto target", and proof of the IPCC's influence in shaping global policy, Thorne said in a Zoom interview.

A third sea change over the last seven years is in the science itself.

Arguably the biggest breakthrough is so-called attribution studies, which for the first time allow scientists to rapidly quantify the extent to which climate change has boosted an extreme weather event's intensity or likelihood.

Within days, for example, of the deadly "heat dome" that scorched Canada and the western US last month, the World Weather Attribution consortium calculated that the heatwave would have been virtually impossible without manmade warming.

But after-the-fact analysis is not the same as foresight, and the IPCC -- set up in 1988 to inform UN climate negotiations -- has been criticised by some for low-balling the danger, a pattern that Harvard science historian Naomi Oreskes has called "erring on the side of least drama".

"First, there is the general conservatism of science -- in many ways that's a good thing," she told AFP.

"But in the climate change arena, scientists have had to deal with an enormous political and cultural pressure not to 'exaggerate' the threat."

The IPCC, she added, must contend with direct interference from the governments on whose behalf it works.

"I think there's little doubt that the effect of outside pressure, overall, has been to cause its statements to fall on the 'less alarmed' rather than 'more alarmed' side of things."

From Monday, representatives from 195 nations, with scientists at their elbow, will vet a 20- to 30-page "summary for policymakers" line-by-line, word-by-word.

The virtual meeting for this first instalment -- covering physical science -- of the three-part report will take two weeks rather than the usual one, with the document's release slated for August 9.

Part two of the report, to be published in February 2022, covers impacts.

A leaked draft obtained by AFP warns that climate change will fundamentally reshape life on Earth in the coming decades even if planet-warming carbon pollution is tamed, and calls for "transformational change" lest future generations face far worse.

Part three, to be unveiled the following month, examines solutions for reducing emissions.

The part one report will project global temperature to 2100 under different emissions scenarios, some consistent with Paris Agreement goals and others that would, by the century's end, plunge today's children into a deeply uncomfortable world, three or four degrees above preindustrial levels.

Based almost entirely on published research, it could forecast -- even under optimistic scenarios -- a temporarily "overshoot" of the 1.5C target, and upwardly revised estimates for long-term sea-level rise.

If International Energy Agency (IEA) projections this week of record carbon pollution by 2023 are right, such an overshoot could last a long time.

There will also be a new focus on so-called "low-probability, high-risk" events.

"Feedbacks which amplify change are stronger than we thought and we may be approaching some tipping point," said Tim Lenton, Director of the University of Exeter's Global Systems Institute.

Beyond yet-to-be-defined temperature thresholds, parts of the climate system could pass a point-of-no-return, including ice sheets holding metres' worth of sea-level rise and permafrost laden with twice more greenhouse gases than in the atmosphere.