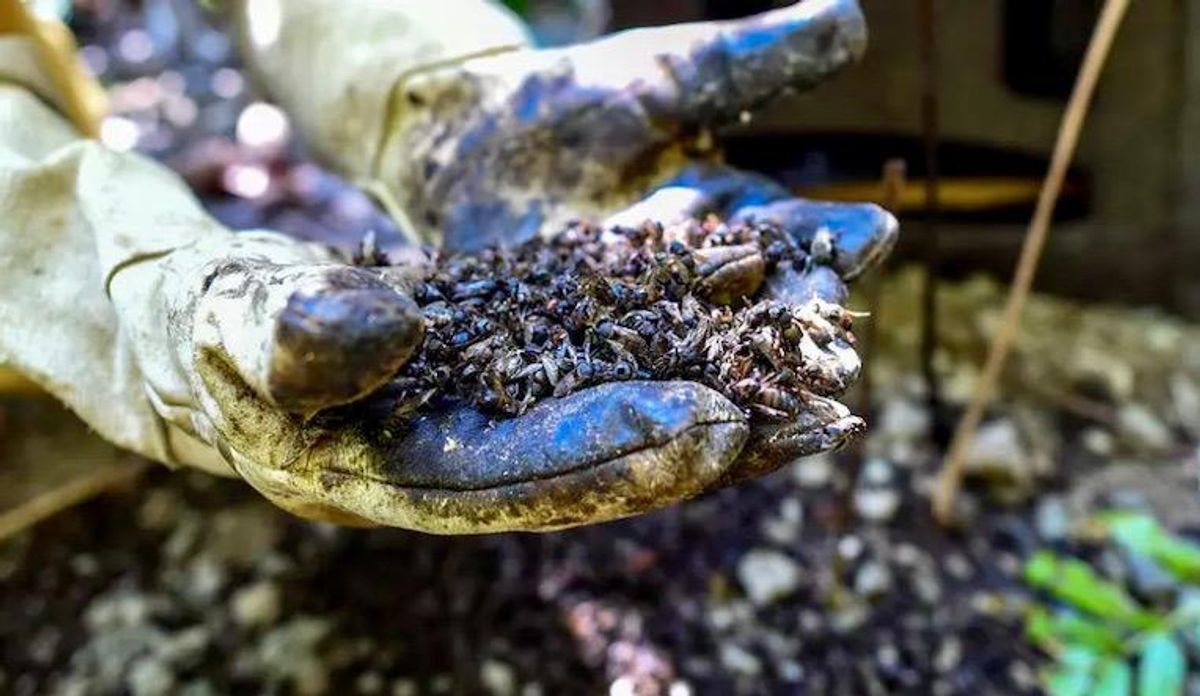 Hundreds of hives have been killed off in Colombia in recent years, and some investigations have pointed to fipronil, an insecticide banned for use on crops in Europe and restricted in the United States and China.

It is used to control all manner of insects, including ants and ticks, and has been blamed for several bee massacres around the world.

Urrego's apiary in Colombia's Antioquia Department produces honey flavored with pollen from nearby passion fruit orchards. In 2019, he lost 10 of his 19 hives.

"There is a theory that, yes, this is due to poisoning, there are some crops around here that perhaps have not managed their agrochemicals well and so this area was affected," he told AFP.

In recent years, bees in North America, Europe, Russia, South America and elsewhere have started dying off from "colony collapse disorder," a mysterious scourge blamed partly on pesticides along with mites, viruses and fungi.

The UN warns that nearly half of insect pollinators, particularly bees and butterflies, risk global extinction.

About 1.4 billion jobs and three-quarters of all crops around the world, according to a 2016 study, depend on pollinators, mainly bees, which provide free fertilization services worth billions of dollars.

Some 300 kilometers (186 miles) south of Antioquia, in the Quindio Department, Abdon Salazar has no qualms pointing the finger at fipronil as he counts his losses.

"Over the last two years, we have calculated more than 80 million dead bees," he said as he walked among the 300 vibrating hives of his business Apicola Oro (Golden Beekeeping).

Salazar and other beekeepers in the region are increasingly having to clear out mounds of dead bees from their apiaries which are surrounded by avocado and citrus plantations in an exceptionally fertile and biodiverse part of the world.

In Quindio, hive collapse has coincided with the expansion of monoculture in recent decades, according to Faber Sabogal, president of the Asoproabejas beekeepers' organization.

According to the local government, five multinational companies bought large tracts of land in the region between 2016 and 2019 to profit from the growing global appetite for Hass avocados.

Exports skyrocketed from 1.7 tons in 2014 to 44.5 tons in 2019, and this year, Colombia became the largest supplier of the creamy, green delicacy to Europe.

But bees are the collateral damage, becoming contaminated as they buzz through pesticide-treated plantations looking for food, say beekeepers.

"They bring this poison to the hive and kill everyone else," said Salazar.

Asoproabejas members have videotaped dozens of mass bee die-offs in several regions of Colombia, mainly in the west.

Some 10 million insects were lost.

ICA regional manager Jorge Garcia said the body examined samples from six apiaries and found that "the fipronil molecule is one of the causes of mortality."

The alert was raised with ICA headquarters in Bogota, which is working on a suspension order, he told AFP.

Withdrawing the poison altogether has been difficult "because the companies producing agrochemicals will be affected economically," said Salazar.

Maria Latorre, spokeswoman for Colombia's agrochemical union, said a fipronil ban would provoke "a very negative situation for the productive structure" of the 33 crops that rely on it.

The body denies that fipronil is harmful to bees, but said it would welcome a "review" of its use "on crops that have had incidents."

But Fernando Montoya of the Colombian Hortofruticola Association, which represents crop growers, said the chemical could be replaced by "mushroom-based bioproducts," insect traps and manual pest removal.

The ICA has denied any link between the expansion of avocado crops in Quindio and the recent decimation of bees.

But rather than risk losing it all, Apicola Oro, which produces some 36 tons of honey a year, decided to pack up and leave.

He has managed to save his business for now, but worries about the future.

"The bee is a bioindicator. If bees are dying, what other insects beneficial to the environment... are dying?".