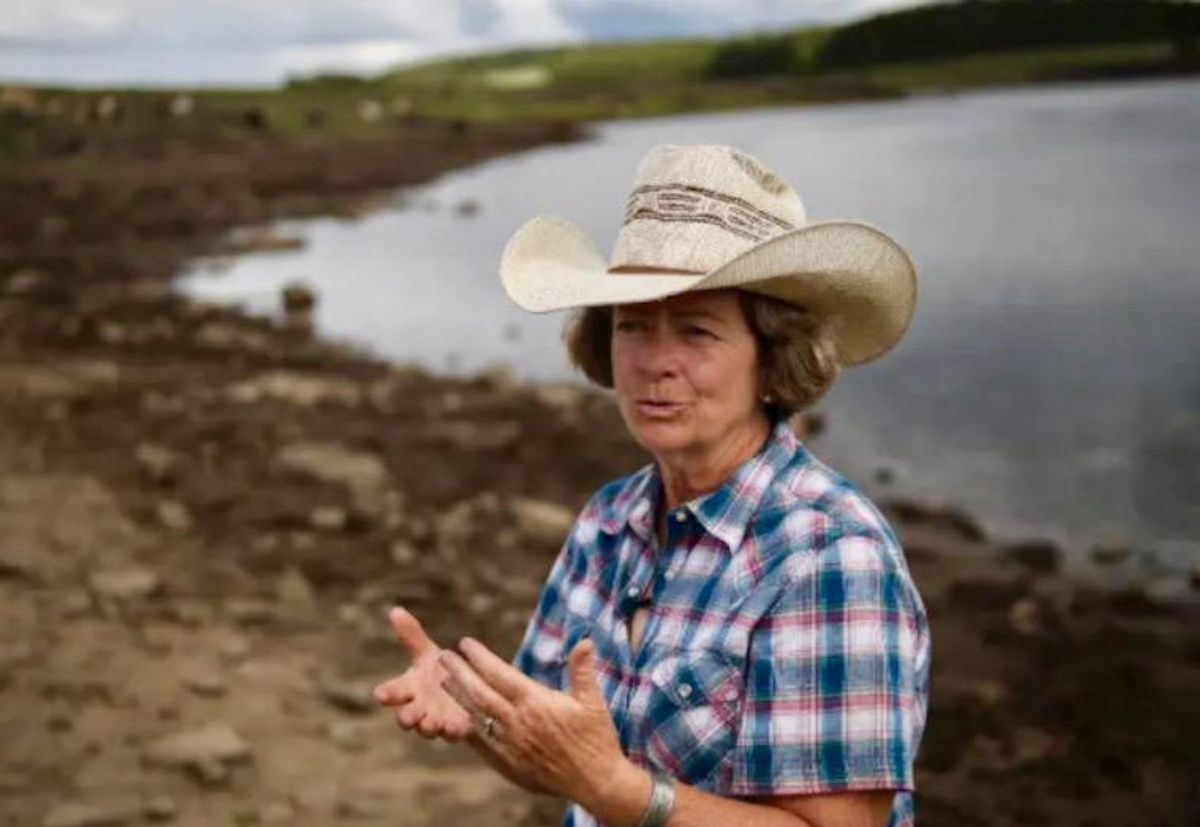 Cattle rancher Janie VanWinkle, seen standing near a reservoir on her Colorado ranch during a record-hot summer, says drought is only one problem facing fellow ranchers(AFP)

"The grass should be up to here," Janie VanWinkle says, holding a hand next to her knee above the scant growth on her ranch in Colorado, which -- just as in 2020, and 2018 -- is again being hit by devastating drought.

"Here we are again," she says, wearing a checkered shirt and a persistent smile that belies her ranch's woes at a time when record high temperatures have been scorching much of the US West.

"The soil moisture is just completely depleted, you can dig down four feet and there's no moisture in the dirt. So that's the cumulative effect that makes it tougher than previous droughts."

But the drought is only one of many challenges facing ranchers, not only in Mesa County where she lives, but across the West.

"The drought's right here in your face, you never get away from that," she says. "So it feels like we are always under attack, whether it's 'fake' meat, wolves, animal rights, environmental issues -- you name it."

Colorado provides a case study of the modern tensions between cities and the countryside, between the metropolis of Denver -- a haven for digital start-ups and progressive movements -- and sparsely inhabited regions where ranchers spend hours on horseback checking on their grazing herds.

Janie VanWinkle, her husband Howard, and their son Dean own about 450 head of cattle, after selling 70 last fall in expectation of the coming drought, and 35 in June as their hay stock began to run low.

They are constantly juggling between buying more feed as its price rises, and selling more cattle.

While the survival of the ranch is not immediately threatened, this will be a bad year: Janie VanWinkle estimates that her cattle will weigh 100 to 120 pounds (45 to 55 kilograms) less than usual when they are sold to feedlots in the fall.

Looking ahead, the most likely scenario "is that these drier conditions will be the norm," said Russ Schumacher, a professor of atmospheric science at Colorado State University.

"It will take years of above normal precipitation -- not just one year -- to get out of these conditions," he added.

The higher temperatures brought on by climate change are magnifying the consequences of low rain- and snowfall, Schumacher said.

When her son came home from college, Janie VanWinkle recalled, "Dean was like, 'You guys need to be irrigating!'

"But we are! We have been!" she said. "It's just not doing anything, because it's been so hot."

She worries about what the future holds for her son -- the fifth generation of ranchers in the family -- not just because of the drought but because of an increasing tangle of societal pressures.

In March, Colorado's Democratic governor urged people to observe a day without meat; the state voted in 2020 to reintroduce wolves, which prey on cattle; and real-estate developers and tourism promoters keep buying up prime ranchland.

An NGO that campaigns against animal cruelty recently sought to organize a statewide referendum that would have banned artificial insemination and the slaughter of cattle less than five years old (instead of the more typical age of less than two years).

"All of these things come together and it does create a huge emotional toll on our ranchers and our livestock producers. It's brutal," said VanWinkle, who was the previous president of the Colorado Cattlemen's Association.

In the long run, "social perception is going to change things more than drought," she said. "It's sometimes just totally overwhelming."

Dean VanWinkle, who recently completed his college studies in animal science, remains convinced that the cattle-ranching industry can adapt and survive -- even flourish -- while respecting the environment.

"Cattle are the biggest upcyclers, really, that there is," he said, referring to their ability to transform hay into protein.

"Ultimately," he added, "cattle themselves are pretty much climate neutral."

That claim is widely disputed. Worldwide, cattle are responsible for 14.5 percent of the greenhouse gas emissions behind climate change, according to the United Nations.

The rate in the United States is lower, however -- four percent, according to the US Environmental Protection Agency.

The American industry boasts that it produces as much meat now as in 1977, but with herds that are 33 percent smaller, owing to progress in genetics and nutrition.

"The producers are extremely adaptive," said Kim Stackhouse-Lawson, who heads a sustainable livestock initiative at Colorado State University in collaboration with the industry.

Among possible developments, she mentioned breeds better adapted to different climates, new technologies like drones or computer-linked "necklaces" to guide cattle, and diversification by ranchers into eco-tourism or hunting expeditions.

"I believe that the future is bright," said Brackett Pollard, who wears two hats, as a rancher and a banker.

"We've learned through the pandemic, where prices were exceptionally high, that people are willing to pay a lot for our product," said Pollard, who raises several hundred head of cattle at his ranch near the town of Rifle.

"We've got social pressures," he added, but "the demand for beef has never been higher."