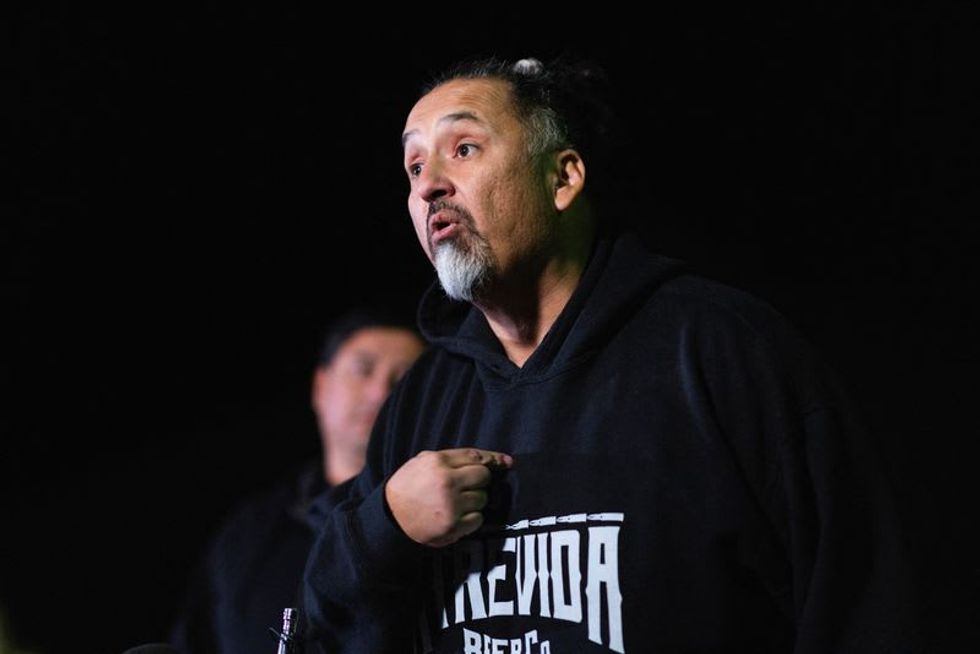 By Kevin Mohatt and Keith Coffman

COLORADO SPRINGS, Colo. (Reuters) -Colorado Springs officials on Monday identified the five shooting victims who died and the two heroes who prevented further bloodshed at the LGBTQ nightclub where a gunman opened fire on Saturday night.

Another 17 people were wounded by gunfire in the rampage. Police said they had yet to determine a motive, but the city's mayor and LGBTQ rights groups said the attack bore the hallmarks of a hate crime.

The suspected shooter, a 22-year-old man, remained under arrest at a hospital, presumably for injuries sustained when a decorated former Iraq and Afghanistan war veteran pummeled him in a successful effort to stop the assault at Club Q in Colorado's second-largest city.

Club Q, one of the only places for LGBTQ people to gather in Colorado Springs, attracted a diverse crowd of queer people and straight allies. On Sunday, which was Transgender Day of Remembrance, the club was planning to mark the occasion with a "drag brunch" and a nighttime show "with a variety of gender identities and performance styles."

Police held him on initial charges including five counts of first-degree murder and bias crimes, but prosecutors said they expected to file formal criminal charges that may differ once he is out of the hospital.

The suspect, Anderson Lee Aldrich, was known to law enforcement, having been arrested in June 2021 after his mother reported he threatened to detonate a bomb and harm her with multiple weapons, according to a news release from the El Paso County Sheriff's Office.

Fierro is a U.S. Army veteran who did three tours of duty in Iraq and one in Afghanistan.

"I'm straight. My kids are straight, but we go there ... Why? Because it's about community," Fierro told reporters.

When the shooting broke out, Fierro said he rushed the gunman, pulled him to the ground, then grabbed the gunman's pistol and hit him with it.

James helped by removing the shooter's rifle, which Fierro described as an AR, and kicking him. Meanwhile a drag performer stomped him with high heels, Fierro said.

"I wish I could have done more," Fierro said. "But those (five) people aren't home tonight, and I am. And I'm really upset by that. It's not something I'm proud of."

Fierro, who had gone to celebrate a birthday with his wife, their daughter and some friends, was unable to save his daughter's boyfriend, Raymond Green Vance.

Vance, 22, had never been to the club before but was supportive of the LGBTQ community, his family said in a statement.

"He had just gotten a new job at a Colorado Springs FedEx distribution center, and was thrilled to have received his first paycheck," the family statement said. "He couldn't wait to save enough money to get his own apartment."

Others families of the deceased offered tributes as well.

Kelly Loving's sister, Tiffany Loving, said simply, "My sister was a good person. She was loving and caring and sweet. Everyone loved her. Kelly was a wonderful person."

Ashley Paugh's husband, Kurt Paugh, described his wife as his high school sweetheart, an "amazing mother" of champion swimmer Ryleigh and someone who worked at a nonprofit that helps find homes for foster children.

"This included working with the LGBTQ community to find welcoming foster placements for children," Paugh said.

Daniel Aston, 28, was a transgender man and bartender at the club who also performed in shows as a dancer, according to a Colorado Public Radio interview with his mother, Sabrina Aston.

"He was the happiest he had ever been," Sabrina Aston said. "He had so much more life to give to us and to all to his friends and to himself."

Derrick Rump was a Club Q bartender who was "what made Club Q," Kayla Rene Cortes, a 26-year-old lesbian who has visited the bar for years, told the Washington Post.

"He was living his dream and he would have wanted everyone to do the same," his mother, Julia Thames, told ABC News in a statement.

El Paso County District Attorney Michael Allen warned the investigation may be lengthy and declined to say what charges may be brought, but promised justice.

"The devastation this violent act has had in our community cannot be measured," Allen said. "But we do know that we will respond to it in a strong way."