Three hours after Rittenhouse verdict, conservative pages ruled Facebook's engagement algorithms by a factor of 9 to 1

Last Friday, Cristiano Ronaldo's Facebook page had the most interactions in the world. "Let's chase what we are trying to achieve this season!" he exclaimed.

The Portuguese soccer star's post, however, was an island in a partisan sea. The next six most engaged posts came from outspoken American conservatives cheering the acquittal of Kyle Rittenhouse for the killings of two men at a Wisconsin protest. Looking at shared links, conservatives' Facebook dominance was even more stark — 18 of the top 20 most engaged page links in the world originated from conservative Facebook pages.

Facebook's largest leak in history focused on the company's past. Missing, however, from the coverage of a Facebook whistleblower has been a focus on Facebook's present.

To look at Facebook's data about user interactions — which reflects the engagement of its users with content worldwide — is to find oneself in a universe where American conservative voices dominate. While Facebook claims to host a diverse spectrum of two billion users, its daily engagement ranking exposes how right-wing actors eclipse all other media conversations atop its algorithm.

RELATED: Yet another Facebook whistleblower comes forward as the social media giant is rocked by allegations

Three hours after 18-year-old Kyle Rittenhouse was acquitted of the murder of two men at a Wisconsin protest, Facebook lit up with a panoply of conservative pages cheering the teen's exoneration. Even a cursory glance at the scoreboard — the top 20 most engaged link shares by pages in the world — suggests that Facebook has become a town square for right wing American voices. Ninety percent of Facebook's most engaged pages linking out to other websites were conservative pages, with just two mainstream sources — NPR and NBC News — eking out a place on the list.

Three hours after the Rittenhouse verdict, the above public Facebook posts had the most user engagement in the world on posts by pages that included links.

Twenty four hours after the verdict, conservative pages gave up some ground. But while link posts from Myanmar, Great Britain and Qatar joined the list (at 17, 18 and 19), conservative American pages still held 15 of the top 20 posts, and 90 percent of the top ten — worldwide.

"Kyle should spend the next year suing the absolute pants off of every news outlet that defamed him," one Trump for President post read. There is no indication former president Trump is involved with the page. 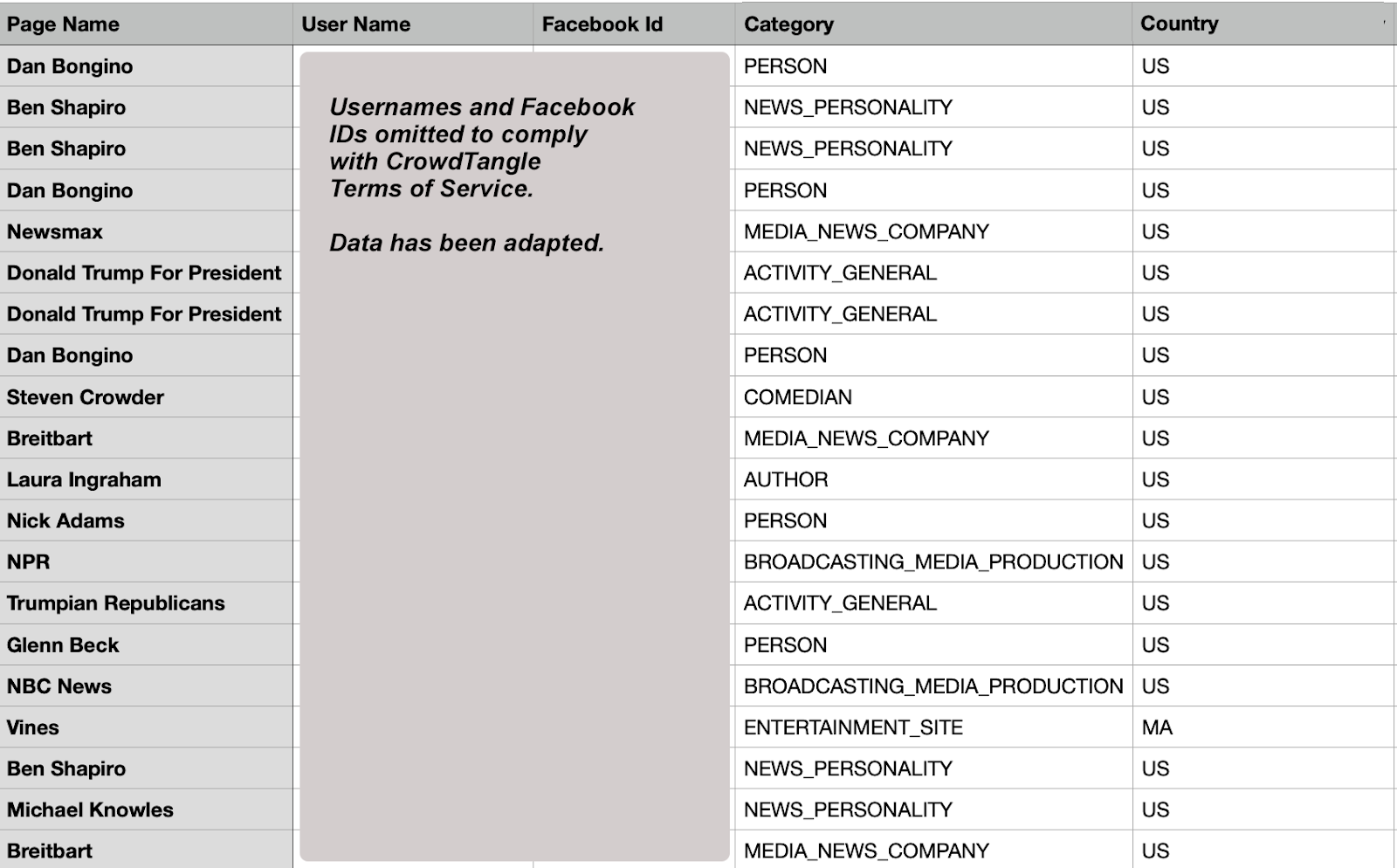 In August, Facebook released a report showing that recipes and cute animals ranked among the most viewed on the platform. The report was undermined by the New York Times, which revealed the company had shelved an earlier analysis showing the most viewed link was "a news article with a headline suggesting that the coronavirus vaccine was at fault for the death of a Florida doctor." Facebook then released the earlier report.

Facebook's third quarter report appeared to support the company's claims that the most viewed content isn't partisan. The most widely viewed domains included YouTube, GoFundMe and Amazon, and the most popular posts were memes. Only the anti-China page, Epoch Times, which spreads right-wing conspiracy theories, stood out among the top 20 most seen US pages.

A former Facebook executive who spoke to Raw Story criticized the company's transparency reports. The executive noted that Facebook had only released a tiny amount of data; the reports only show the top 20 in any category.

Better reporting, the executive said, would include not simply what was popular — but where, including different geographic areas of the U.S. Facebook should also reveal what content gets distributed to which demographics, the executive said, as well as more current data to allow analysis of "trends and pockets of trends" on Facebook.

Facebook's most engaged link shared by a page following Rittenhouse's acquittal was posted by Bongino, the conservative talk show host. Bongino's Facebook post linked to a video where a crowd outside the courthouse cheered to a chant of "Freedom wins! Freedom wins! Freedom wins!" followed by another man screaming, "Second amendment stays!"

RELATED: Here's all you need to know about Dan Bongino -- who's trying to take over Rush Limbaugh's job

Bongino has more monthly Facebook engagement than the New York Times, the Washington Post and CNN combined. Asked why he's so popular on Facebook, he said, "I think people just love the message." Bongino has promoted conspiracy theories, including allegations that Democrats spied on former President Trump's 2016 campaign, and falsely asserted that masks are "largely ineffective" at preventing the spread of COVID-19.

Facebook's second and third most engaged post following the Rittenhouse verdict came from Ben Shapiro, founder of the conservative news site The Daily Wire. "Not guilty was the correct verdict," Shapiro's page wrote. "Anyone with a prefrontal cortex who had watched the trial for more than 30 seconds knew this. Anyone who says differently is a lying hack."

"Justice was served," Shapiro's page added in another post. "The Left accepting the verdict in a peaceable manner remains the sizable elephant in the room."

The Daily Wire article linked asserted that social media was celebrating Rittenhouse's not guilty verdict — which was true, at least on Facebook.

"Joe Biden, CNN, MSNBC, and the Democrat establishment should apologize for lying about Rittenhouse as a 'racist' and 'school shooter' and 'white supremacist' for months," the author wrote, quoting conservative radio host Buck Sexton. "But they won't, because they have no honor and don't care about the destruction they constantly incite."

"These jurors are patriots," Sexton continued. "They chose honor, truth and love of country over the whims of the vicious Leftist mob." 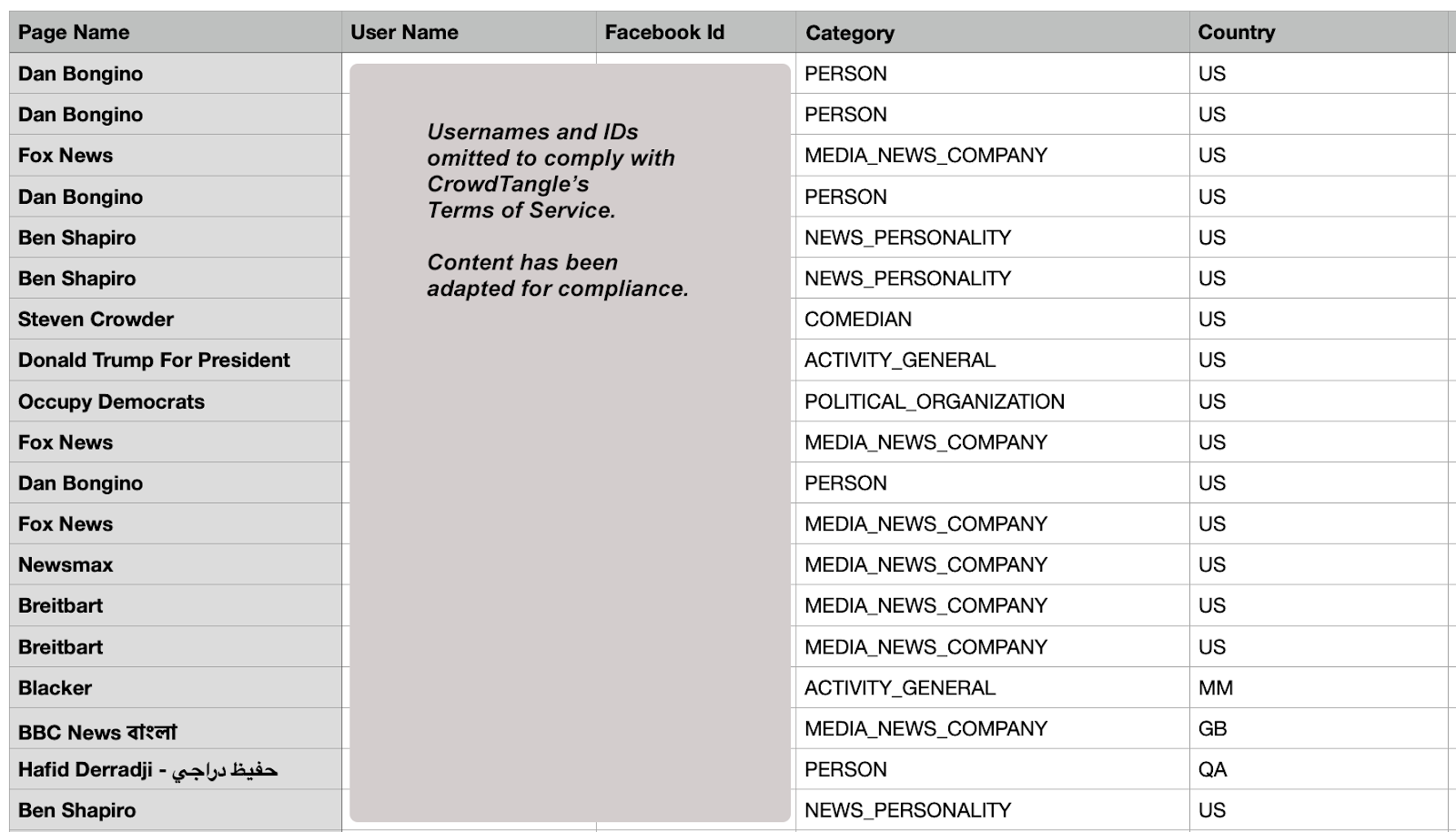 Twenty four hours after the verdict, conservative Facebook pages held 75% of the top engaged link posts in the world.

The Daily Wire's article was the most engaged news article linked from a Facebook page in the three hours following the verdict.

The Daily Wire's success is linked to the fact the company controls multiple Facebook pages. At least eight have more than 500,000 followers, including Daily Wire, The Angry Patriot, Fed Up Americans, The Real Patriots, Matt Walsh and Donald Trump is My President. It also controls pages with more than 100,000 followers: Conservative News, The Conservative, Boycott, The Right News, Restless Patriot, Pro-America News and The United Patriots.

Shapiro's own page, with eight million followers, is run by The Daily Wire, which describes itself as "one of America's fastest-growing conservative media companies and counter-cultural outlets for news, opinion, and entertainment." The site is owned by Shapiro, his editorial partners and self-made fracking billionaires.

Daily Wire was forced to acknowledge ownership of its other Facebook pages after an expose by Popular Information. Facebook acknowledged the pages engaged in deceptive coordinated sharing that violated its rules, but allowed them to continue to operate. During the Trump Administration, Shapiro was among a number of conservatives who had private dinners with Meta CEO Mark Zuckerberg.

While Facebook correctly notes that engagement and views are different, data Crowdtangle releases about videos reveal total views. That data shows that conservatives won that race as well.

Eighteen of the top 20 videos related to the trial by engagement — or 90 percent — were posted by conservative pages.

Twitter's algorithmic response to the verdict was more balanced. Five hours after the verdict, Kyle Rittenhouse and Kenosha ranked as number one and two most trending topics. "NOT GUILTY" was celebrated among some of the tweets, but Twitter's number five referenced Rep. Jerry Nadler (D-NY), chairman of the House Judiciary Committee, who said Rittenhouse's acquittal was a "miscarriage of justice."

Have tips about Facebook or internal information about social media platforms? Email techtips@rawstory.com.

Raw Story is paid by Facebook for content through its Instant Articles program. John Byrne holds direct investments in Meta, Facebook's parent company; Softbank, one of TikTok's large early investors; and Alphabet, the parent company of Google and YouTube. He is the founder of Raw Story.