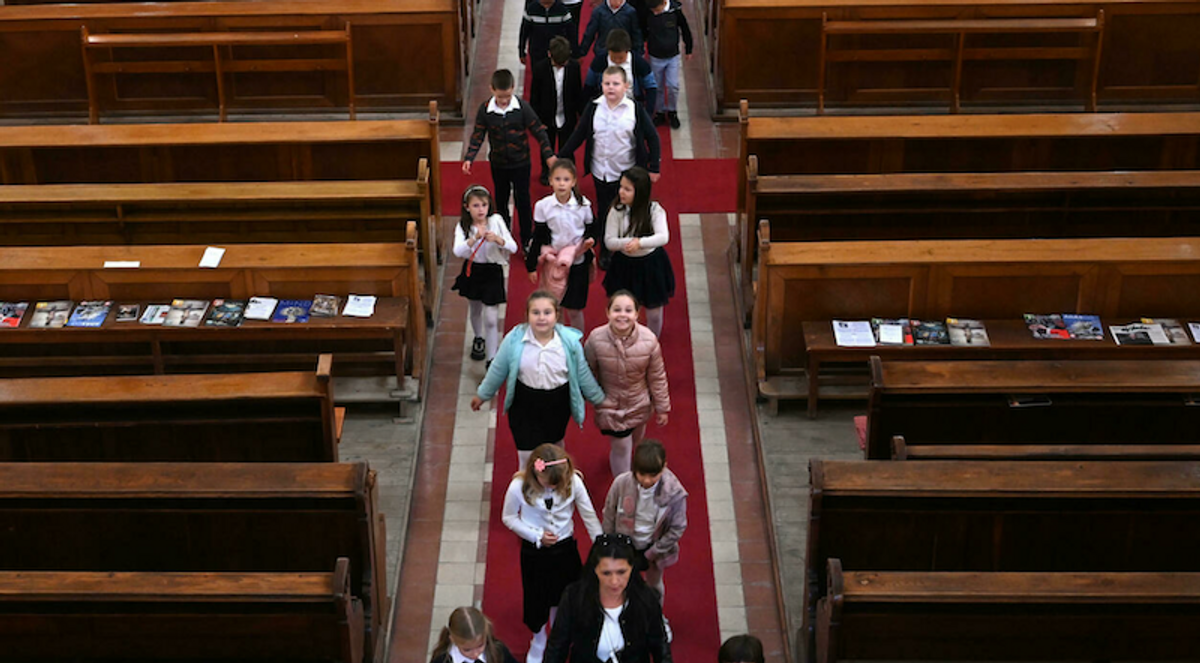 "Jesus loves me... Jesus is happiness," they sing, clapping along to the hymns.

It is not a scene from Sunday mass, but from a primary school where students are kicking off the day with prayer as part of the government's efforts to re-Christianise education.

The decade-old campaign has been pioneered by Hungary's nationalist firebrand prime minister as part of his "conservative revolution" in the eastern European nation that Pope Francis will visit on Sunday.

The result: more crosses in classrooms and daily schedules punctuated by prayer and catechism.

It has also led to more government funds being funnelled into Christian schools -- often attended by wealthier students -- at the expense of public schools where poorer children are enrolled.

For Andrea Magyar, headmistress at Ferenc Liszt, the change has been a welcome one.

Her school of 400 in the southeastern town of Hodmezovasarhely has been under the direction of Dominican nuns since September 2020. She says relations are "less bureaucratic and warmer" with the diocese compared to the centralised education authority, and insists the curriculum itself "has not changed".

The religious elements -- crosses and catechisms -- are not obligatory, she says, and a new crop of young teachers have helped revive the school.

So have government subsidies, which have allowed her to freshen the paint work and plan other renovations, she told AFP in early September, speaking under an old oak tree in the school's sunny courtyard.

The so-called re-Christianisation of Hungary's schools has been spearheaded by controversial leader Viktor Orban, who rose to power on a tide of populist support in 2010.

A self-styled defender of "Christian civilisation", he bucked trends secularising education elsewhere in Europe, vowing to reverse course on a communist-era suppression of religion in Hungary. In 2018, 18 percent of schools of schools in Hungary were Catholic, up from 9.4 percent in 2010 ATTILA KISBENEDEK AFP

Instead, his government has overseen an increasing number of educational establishments coming under the authority of the Church.

He may be keen to showcase this shift on Sunday when he meets the Pope in Budapest.

His former chief-of-staff Janos Lazar said in 2016 that "education should be the business of Church institutions" in the service of two essential aims: "that children learn to be good Christians and good Hungarians".

But the uptick in Church-run schools may not reflect a more pious society, said Kriszta Ercse, a sociologist at the Civil Platform for Public Education.

In the last national census in 2011 only 39 percent of Hungarians identified as Catholics and 11 percent as Protestants. Among adherents, only 15 percent attended religious services.

A new census has been delayed by the pandemic but experts estimate these figures haven't changed substantially.

Instead, Ercse says parents are attracted to church schools because they outperform public ones -- in part due to the more generous state funding they receive, according to Ercse.

That's why Ildiko sends her children aged seven and 14 to Ferenc Liszt primary school in Hodmezovasarhely -- for free like public schools in the country.

She praises the school's "excellent atmosphere and committed teachers" since it was taken over by the Church, and says she is "very satisfied" with the changes. But it's not all positive.

Eager to keep up academic performance, some religious schools actively seek out students from wealthy families at the expense of poorer children and those from the Roma minority.

Ercse calls this a "drastic form of selection" and warns it could lead to "ghettoisation".

"The government is leaving public schools to rot," she says.

The evidence is already emerging.

According to the Fiscal Council, an independent auditor of the public finances, during the 2017-18 school year, religious schools received the equivalent of 570 euros per pupil.

Public schools got just 25 percent of this amount. Hodmezovasarhely's mayor Peter Marki-Zay is also worried about the "segregation" the system may foster.

But he doesn't support a two-tier system.

"I find it unfair that religious schools get more government subsidy than public ones," he told AFP.