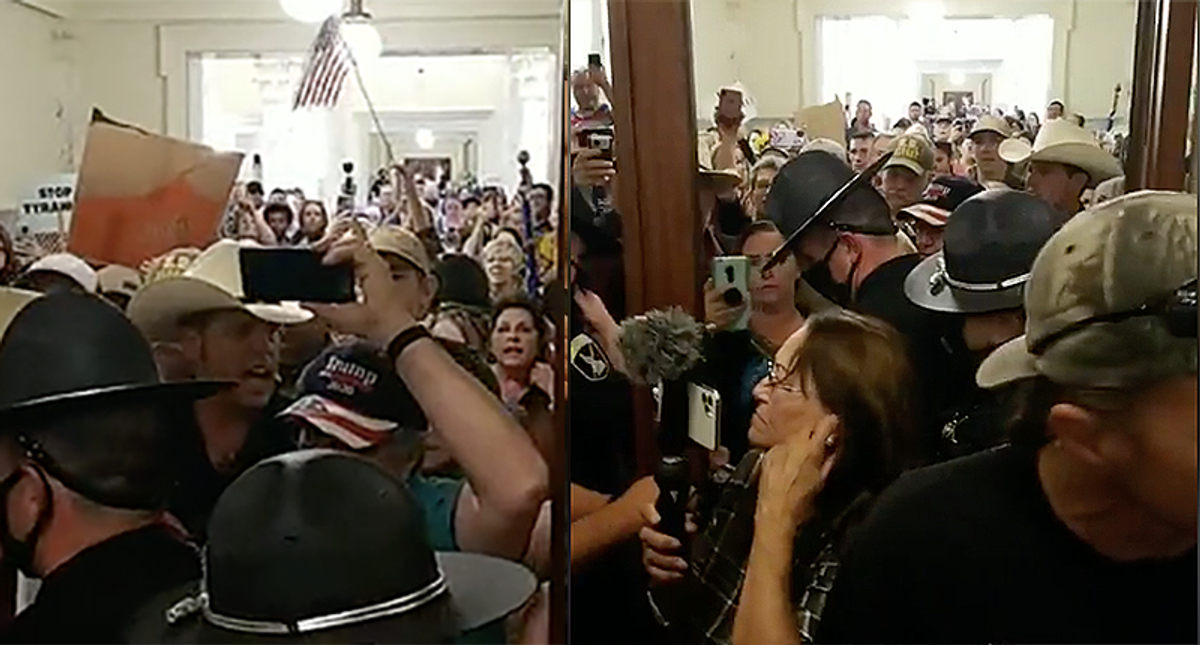 The word "deprogramming" is typically used in connection with extremist religious cults such as the Unification Church, the Tony & Susan Alamo Christian Foundation or Jim Jones' the People's Temple, but cults can be political as well — for example, the QAnon movement. Political science expert Brian Klaas, in a Washington Post op-ed published on January 25, lays out some reasons why it is so difficult to "deprogram" Americans who have embraced far-right political cults and outlandish conspiracy theories.

"For the past four years, the United States was governed by a conspiracy theorist in chief," explains Klaas, who teaches global politics at University College London. "Whether by retweeting QAnon accounts from the Oval Office or painting himself as the victim of shadowy 'deep state' plots at rallies, President Donald Trump injected the toxin of baseless conspiratorial thinking straight into America's political bloodstream. On January 6, America saw how far that venom had spread as a ragtag group of militias, racist extremists and flag-waving disciples of Trumpism stormed the Capitol."

The January 6 "insurrectionists," Klaas adds, had certain things in common: they were "unified by their support for Trump" and were also "conspiracy theorists."

"There is no doubt: the United States has a serious problem with pathological political delusions," Klaas warns. "So, do we have any hope of deprogramming the millions of Americans who are devoted to dangerous lunacy? Don't hold your breath….. Once people have gone far enough down the rabbit hole of conspiratorial thinking, it can be nearly impossible to get them back out."

Klaas goes on to list some reasons why it is so difficult to "deprogram" conspiracy theorists. According to Klaas, "First, conspiracy theorists are far more likely to have a Manichaean worldview, meaning they interpret everything as a battle between good and evil….. Second, those who seek to debunk conspiracy theories are precisely the people that true believers distrust…. Third, these organized mass delusions are designed to resist debunking."

There's a joke among critics of far-right conspiracy theorist and radio host Alex Jones that goes something like this: what did the Alex Jones listener say when told that there is no New World Order? The listener said, "Yeah, that's what the New World Order wants you to think." It's a joke, but it speaks to one of the important points Klaas makes in his op-ed — that when someone pushes back against conspiracy theorists, they sometimes respond by digging in even more.

A variety of media outlets, from CNN and MSNBC to Mother Jones and The Nation, have been relentless when it comes to debunking the far-right conspiracy theories that came from the Trump Administration and its sycophants. But Klaas notes that "if someone believes the media is controlled by sinister but unseen puppet masters, fact- checks from CNN will never convince them they're wrong."

"For the past four years," Klaas notes, "those who have worked hardest to dispel QAnon believers of their fantasies are the very people that 'Anons' trust least: anti-Trump academics like me, news outlets such as the Post and politicians who they believe to be co-opted by the 'deep state.' Political scientists Brendan Nyhan and Jason Reifler have documented the risks of a backfire effect, in which correcting misperceptions actually ends up entrenching them. In the world of conspiratorial thinking, the harder the pushback, the greater the proof that a coverup is afoot."

According to Klaas, the "rise of social media" has made it much easier for far-right conspiracy theorists to live in a bubble.

"Bowling alone has been replaced by tweeting together — a cardboard cutout for real social interaction, but one that has a seductive allure to millions of people," Klaas warns. "Many of the fanatics who stormed the Capitol were neither poor nor social misfits, but rather, had found a digital community to augment or replace their offline one. We can no longer pretend that conspiracy theorists are beneath our attention. They've shown they have tremendous capacity to inflict damage on society."

Klaas discussed his Post op-ed during a January 26 appearance on MSNBC's "Morning Joe." Watch the video below: