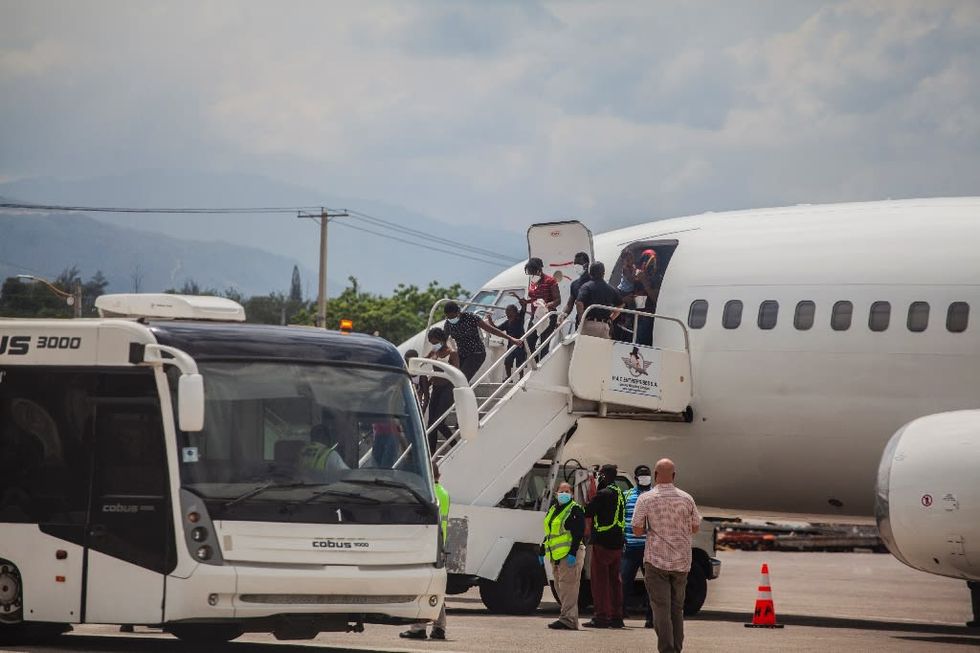 In recent days, more than 15,000 Haitians crossed into the US country from Mexico and found themselves stranded for days in Texas under a bridge spanning the Rio Grande river, blocked from moving onwards

Port-au-Prince (AFP) - Migrant families sent back to Haiti by the United States after attempting to enter the country from Mexico are angry at their treatment and fearful of returning back home to a life punctuated by gang violence.

The deportation of Haitian migrants had been temporarily suspended by Washington after a devastating earthquake hit the Caribbean nation last month.

But in recent days, more than 15,000 Haitians crossed into the country from Mexico and found themselves stranded for days in Texas under a bridge spanning the Rio Grande river, blocked from moving onwards.

Washington began sending back members of this group on Sunday, with three flights full of Haitian nationals landing in the capital Port-au-Prince after taking off from Texas hours earlier.

"(US President Joe) Biden knows well what is happening, but he doesn't care," said one woman, tears streaming down her face as she described her time at a US migrant detention facility in Texas.

"He treated us, us and our children, worse than animals," she said.

Fellow returnee Garry Momplaisir, who spent five days at the same facility, said that those held there had been forced to sleep on a concrete floor under thin plastic tarps.

"We weren't able to shower. There were toilets, but no space to bathe ourselves," the 26-year-old added, who was deported with his wife and their five-year-old daughter.

As they waited for Haitian authorities to complete their re-entry paperwork, many of the returned migrants took the opportunity to give their children a basic wash.

'No one can explain the horror'

According to flight manifests seen by AFP, nearly half of the 327 Haitians deported by the United States on Sunday are under five years old and were born abroad.

Before arriving at the US-Mexico border, several of the Haitians had emigrated to Chile and Brazil in 2016 and 2017.

"In Santiago, I had a small business, my husband worked. We were able to save money -- that's what allowed us to make the whole trip to the United States," said a 28-year-old woman, who identified herself only as Jeanne.

She, her husband and their three-year-old son Mael, who has a Chilean passport, spent two months and $9,000 traveling through South and Central America and Mexico on their way to the United States along a route that human rights groups consider among the most dangerous in the world.

"It's an inexplicable thing. No one can really explain the horror," Jeanne said. "If I had known what I was going to live through, I would have never made the trip," she said, tearing up.

The family thought they would benefit from the extension of the Temporary Protected Status policy in the United States, which allowed Haitians to temporarily stay in the country regardless of their immigration status.

But the rule, which offers protections to migrants whose home countries are dealing with catastrophes like natural disasters, only applied to Haitians already in the United States on July 29.

Biden promised a more humane approach to immigration as compared to his predecessor Donald Trump, but the veteran Democrat has fought to stem the tide of migrants crossing the border since he took office in January.

"If I had been able to work, I never would have left (Haiti)," Jeanne, who emigrated in 2016, said. "But now the situation has worsened."

Jeanne, whose mother remains abroad, will live in a gang-controlled neighborhood on the outskirts of Port-au-Prince with her in-laws.

"Imagine, some guys were able to enter the president's house and kill him in his room," Jeanne said, referring to the assassination of Haitian president Jovenel Moise in July.