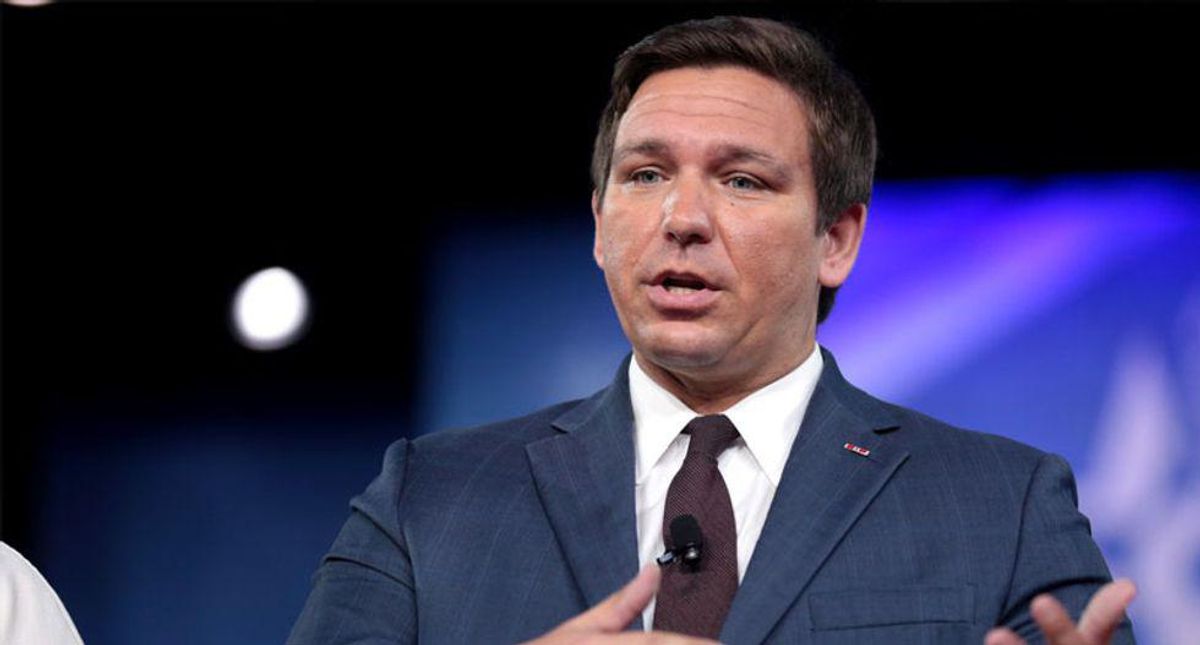 Florida Gov. Ron DeSantis has been a vehement critic of the American Rescue Plan Act of 2021, which the far-right Republican and ally of former President Donald Trump has slammed as "Washington as its worst." But Steve Benen, in an op-ed published by MSNBC's website on June 3, stresses that there is a major problem with DeSantis "railing against" that bill: his willingness to accept almost $9 billion in Rescue Plan funds from the federal government.

Benen explains, "Yesterday, as Florida Gov. Ron DeSantis (R) signed his state's budget, there were plenty of smiles, with the governor announcing $1,000 bonuses for teachers, principals and first responders. 'We're proud that we got the bonuses through,' the Republican boasted. There was a detail, however, that DeSantis didn't mention."

That detail, Benen adds, is how much the Florida budget relies on federal funds from the Rescue Plan. On June 2, Politico's Matt Dixon reported that DeSantis "signed a $100 billion state budget bolstered by nearly $9 billion in expected federal stimulus funds, putting the Republican governor in the awkward political position of building his budget on a wave of cash from President Joe Biden.... The newly signed budget, the biggest in state history.... was made much easier to cobble together because of the American Rescue Plan, the Biden Administration's $1.9 trillion COVID-19 stimulus package."

The Rescue Plan came about strictly because of Democrats; not one Republican in either the U.S. Senate or the U.S. House of Representatives voted for it — although some House Republicans have hypocritically tried to take credit for a bill they voted against.

Benen says of DeSantis' use of Rescue Act funds in Florida's budget, "It's not quite the same thing as congressional Republicans voting against the bill, and then taking credit for its investments, but it's awfully close. Rep. Charlie Crist (D-Fla.), who's running against the incumbent governor next year, wasted little time noting the tension between DeSantis' condemnation of the Democratic law and the eagerness with which the Florida Republican celebrated the law's resources."

DeSantis was elected governor of Florida in 2018, narrowly defeating the Democratic nominee: former Tallahassee Mayor Andrew Gillum — and he is seeking reelection in 2022. The Florida governor and Trump loyalist is being mentioned as a possible presidential candidate for 2024, although it's unlikely that he will seek the GOP presidential nomination three years from now if Trump decides to run.