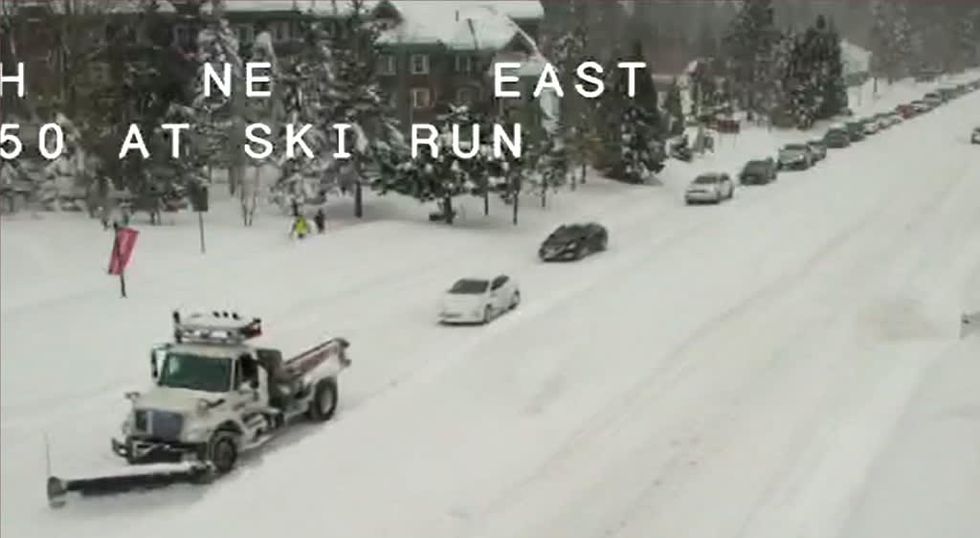 Roads in and out of the resort town of Lake Tahoe, California, have been covered with snow

Three feet (one meter) of snow had fallen in 24 hours on parts of the Sierra Nevada range, taking December's total to a record-breaking 16 feet, and bolstering the badly depleted snowpack that feeds the region's reservoirs.

"It just so happens that we ended up with a lot more snow this year than we expected, which is a pleasant surprise, of course," Schwartz told AFP.

The US west has suffered years of pitiful rainfall, leaving vast swaths of the countryside parched and vulnerable to wildfire.

It is too soon to declare the drought over, said Schwartz, but "it looks like the western United States is getting some help."

The immediate impact of the storm was less positive, with tens of thousands of people experiencing electricity outages and roads blocked.

Pacific Gas and Electric reported power lines had been felled by the fierce weather, with more still to come.

"Winter storm system forecasted to bring more snow, rain & wind -- electric and vegetation crews have restored service to nearly 50k customers since Christmas morning and are prepared to respond to potential outages ahead," the utility said on social media.

In Seattle, in northern Washington state, heavy snow was causing delays and cancellations for travelers, with airport operators having to remove ice from planes, as the city suffered under plunging temperatures.

Much of Oregon was also under a winter storm warning, with a further blanketing of snow expected overnight Monday.

"The heaviest snowfall is expected late tonight into early Tuesday morning with 1 to 3 inches for the valley and coast."

While the US west was laboring under heavy winter weather, Texas was sweltering in an unseasonably warm spell, with the Christmas Day mercury topping out at a toasty 93 degrees Fahrenheit (34 degrees Celsius) in Rio Grande Village.