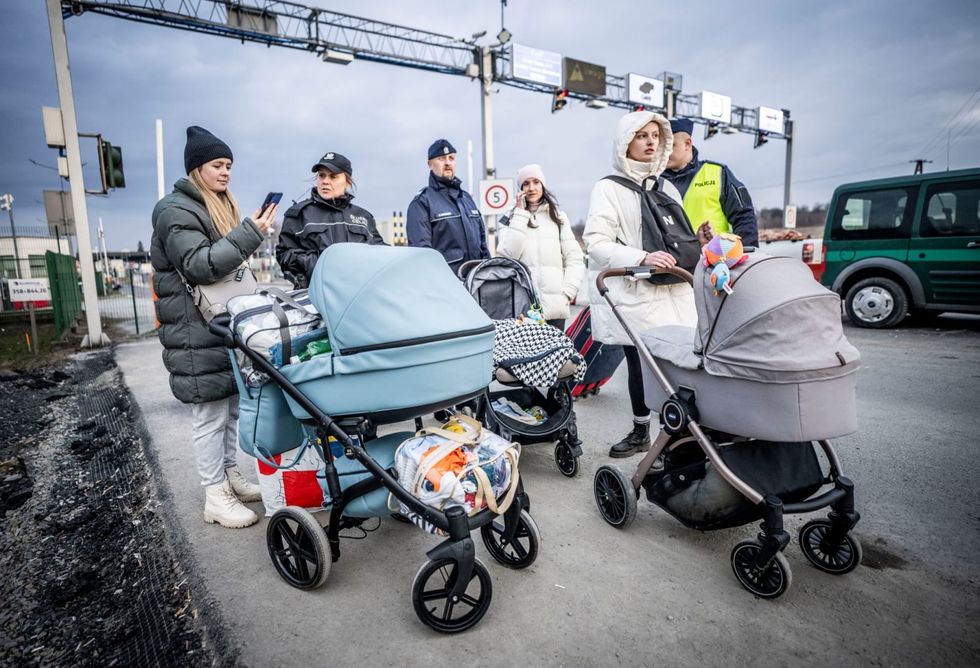 Three refugee women from Ukraine with baby carriages are brought by police officers to the edge of the border area after crossing the border in Poland. Many Ukrainians leave the country after military actions of Russia on Ukrainian territory. Michael Kappeler/dpa

Some 115,000 people seeking refuge from Russia's war on Ukraine have reached Poland, the government said on Saturday, as countries in eastern Europe prepared to welcome people fleeing Moscow's attacks.

In Poland, as Russia's invasion of Ukraine entered the third day, many border guards volunteered to help colleagues process the people arriving by checking their passports, Poland's deputy interior minister Pawel Szefernaker said at a border crossing in Dorohusk.

Large crowds on the Ukrainian side of the border meant those fleeing were having to wait for longer, he said, adding that some people were were trying to enter the country illegally.

Officials in Ukraine were struggling to process the refugees on their side of the border as Russia's attacks had impacted their IT systems, Szefernaker said in comments to broadcaster TVP.

Poland can process up to 50,000 refugees from Ukraine at the border every day, he said. The country is welcoming refugees from its neighbour, with many individuals, companies and local governments also offering to take people in.

The Polish railway company PKP said Ukrainian citizens could travel free of charge on all trains except for the intercity premium connections, if they show their passports.

The train had relatively few passengers on board, with just over a dozen women and children, due to the lack of information and traffic problems at the Ukrainian-Polish border, CD said.

One woman described lengthy queues. "My daughter is already standing at the border for the second day without being able to get through to Poland." Another described the situation as a "humanitarian disaster".

On the outward journey from the Czech Republic, the trains were bringing relief supplies and Red Cross staff.

The Interior Ministry in Prague also said it had received some 1,000 offers of free accommodation for refugees from Ukraine, in a show of solidarity. Many people feel reminded of the Warsaw Pact countries' invasion of the then Czechoslovakia in August 1968.

Bulgaria likewise welcomed a group of Ukrainians of Bulgarian origin and Bulgarian citizens who were brought to the country by bus from Odessa, Bulgarian state radio reported.

Bulgaria has agreed to take in ethnic Bulgarians from Ukraine. The Bulgarian minority in Ukraine is estimated at 250,000 to 500,000 people, according to the Academy of Sciences in Sofia.

Meanwhile a single-digit number of people from Ukraine have reached Germany from Poland since Friday, a spokesperson for the Federal Police in Pirna said.

In the state of Brandenburg which surrounds Berlin, the initial reception centre in Eisenhüttenstadt took in six refugees by midday.

Chancellor Olaf Scholz and the premiers of the federal states had discussed the possible admission of refugees on Friday.

Brandenburg alone is getting ready for at least 10,000 Ukrainian refugees in the next few days, according to Premier Dietmar Woidke.

Lower Saxony is also preparing to receive refugees from Ukraine and will expand its capacities, as Interior Minister Boris Pistorius told broadcaster NDR. Thuringia can immediately take in about 3,000 people from Ukraine, according to Premier Bodo Ramelow and Migration Minister Dirk Adams.