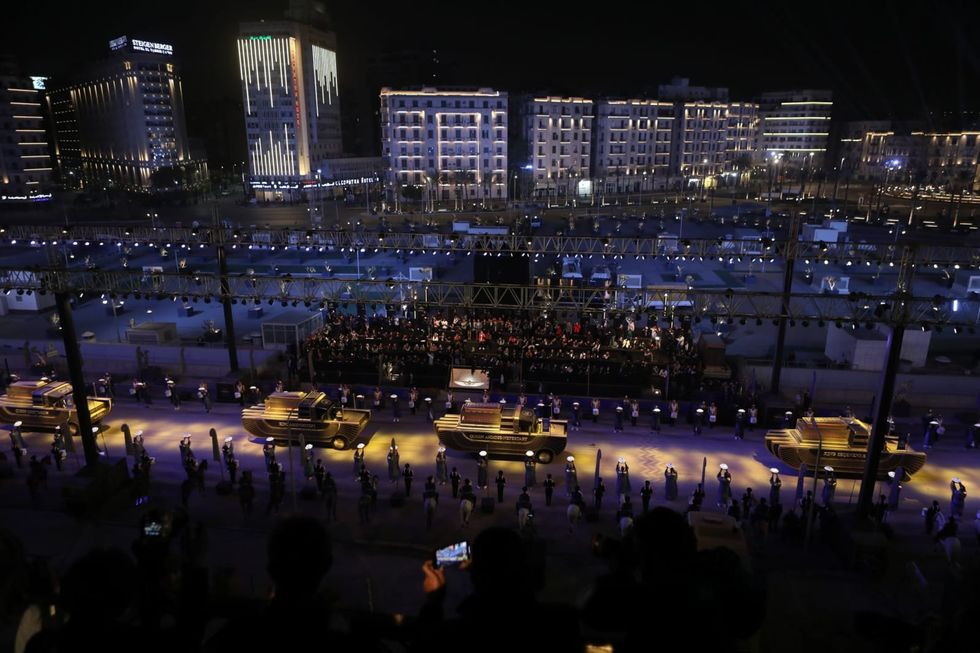 Pharaohs' Golden Parade in Egypt - Carriages carrying the mummies of ancient Egyptian kings and Queens roll out of the Egyptian Museum near Cairo's Tahrir Square during the "Pharaohs' Golden Parade", a procession held to transport the mummified bodies of 22 ancient Egyptian kings and queens from the Egyptian Museum to their new resting place at the National Museum of Egyptian Civilization, located on the shore of Ayn as Sirah Lake. - Gehad Hamdy/dpa

Egypt on Saturday paraded 22 ancient royal mummies along the streets of Cairo, as the country hopes to draw global attention to its rich wealth of antiquities.

The parade marked the transfer of the mummies from their long residence at the Egyptian Museum in iconic Tahrir Square in central Cairo to a new Cairo museum in the historic area of al-Fustat.

Authorities temporarily closed the roads used by the procession, dubbed the "Pharaohs' Golden Parade" to allow for smooth transfer of the mummies in a city noted for usual traffic snarls.

The mummies of 18 pharaonic kings and four queens were carried onto gold-coloured, ancient-Egyptian-styled carriages.

The mummies were placed inside special containers filled with nitrogen to protect them during the parade broadcast live on different Egyptian television stations, said antiquity officials.

Each cart was emblazoned with the name of the royal it carried.

The mummies included that of Rameses II, one of the country's most powerful ancient rulers.

The mummies were originally discovered in the ancient Egyptian city of Luxor and later kept for decades in the Egyptian Museum.

He welcomed the convoy of mummies at their arrival at the National Museum of Egyptian Civilization in al-Fustat.

In their new home, the mummies and their sarcophagi will be "appropriately" displayed, the officials added.

Egypt is seeking to revive its battered tourism industry, a main source of national income.

The industry has been hit by unrest since the 2011 uprising against long-time ruler Hosny Mubarak as well as the global pandemic.