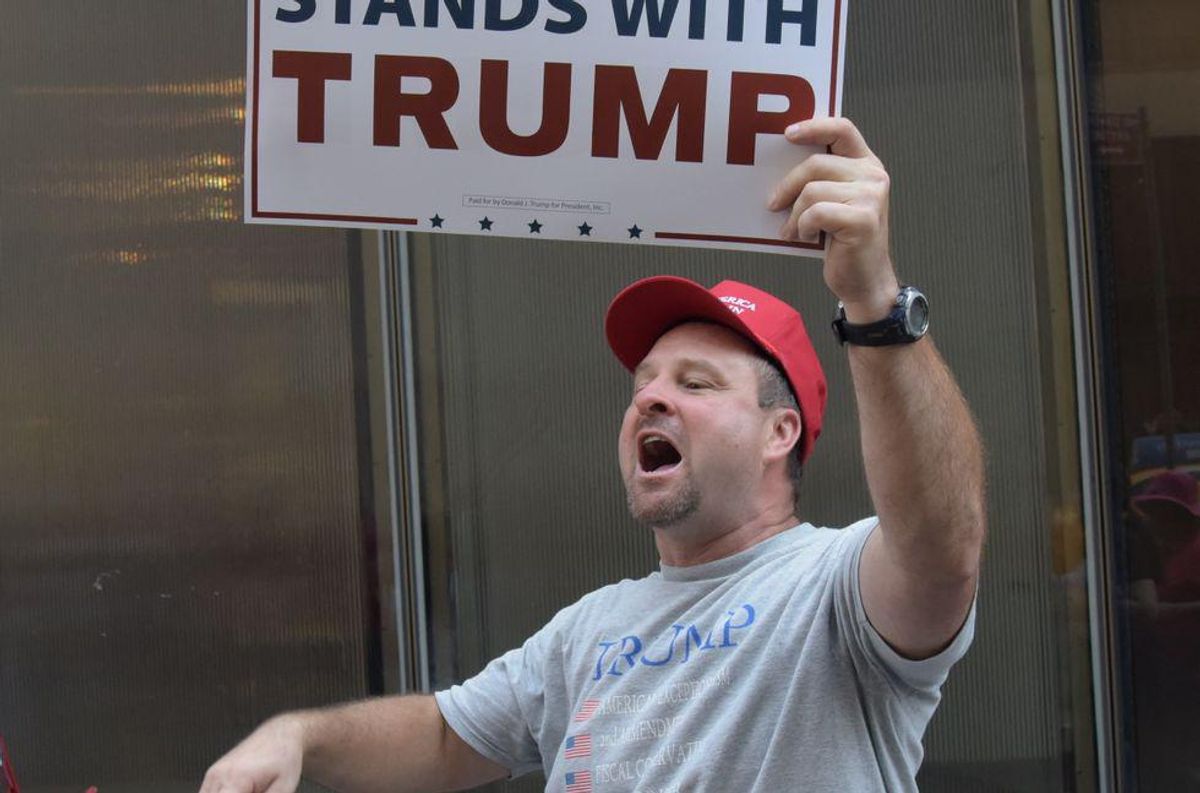 Every so often, a right-wing pundit drops his guard a little and reveals to the world the incel-ish inclinations and bitterness toward women that undergirds so much conservative "intellectualism." This week, it was Manhattan Institute fellow Eric Kaufmann, with a prolonged whine in the National Review about the massive social problem that desirable women apparently don't desire Donald Trump voters. Kaufmann's ostensible point was to warn about the dangers of "progressive authoritarianism" supposedly "infringing rights to equal treatment or free speech." As many folks pointed out on Twitter, however, the evidence offered of such civil rights violations was centered around the low rates of "non-Trump-supporting students willing to date a Trump supporter," the statistic that "87 percent of all female college students wouldn't date a Trump supporter" and the claim that "Trump supporters get the short end of the dating stick."

Kaufmann inserted a CYA statement up top about how "people are free to discriminate however they wish in dating," but the rest of the essay paints a clear picture of rage that Trump voters are being denied romantic or sexual opportunities. But Trump voters' belief that they should be entitled to date liberal women is about more than just what one Twitter wag called "Universal Basic Intercourse." It's about the ego benefits of having a girlfriend: The praise, the respect, the adoration, even — feelings that Kaufmann knows the women he's scolding do not and cannot authentically feel towards Trump voters. It's about entitlement to a woman's flattering lies.

Kaufmann's dumb essay is an extreme example, but the grim truth is that such entitlement oozes out of every corner of the conservative movement. Indeed, the driving force of the modern right is a belief that, when they look out in the world, they should only see flattering lies reflected back at them, and that anyone who speaks the truth is somehow oppressing them.

Last week, the Bullock Texas State History Museum in Austin had a book event scheduled with the authors of "Forget the Alamo: The Rise and Fall of An American Myth," which exposes an often-ignored history about how central white rage at the Mexican ban on slavery was to the Texas revolution. Upon finding out about the event, Republican Lt. Gov. Dan Patrick immediately got it canceled and bragged on Twitter that "this fact-free rewriting of TX history has no place at the Bob Bullock Museum."

Of course the problem was not that the book is "fact-free," but exactly the opposite. Patrick's fury is clearly about the authors daring to utter truths. This is about stomping out historical facts about white supremacy. What is truly amazing, however, is how unapologetic Patrick is. He simply feels entitled to scrub unpleasant facts from history or lie about the lying to justify his behavior.

Patrick has a long history of gleefully stomping on free speech rights in the name of having his prejudices flattered. Just a few months ago, he announced that a top legislative priority would be to pass a law literally forcing sports arenas to play the national anthem, a reaction to the Dallas Mavericks quietly removing the practice from their pre-game program. No one actually missed the anthem, because people go to basketball games to have fun, not to perform half-hearted displays of patriotism that are somehow both needlessly contentious and boring. But Patrick wants to force people to do it, and he's happy to violate their First Amendment rights for a mandatory pantomime of his preferred flavor of "patriotism."

That attitude is exactly what's driving the nationwide tantrum over "critical race theory," based on lies both about the content of critical race theory (which is not actually about "hating white people") and whether it's being taught in public schools (it's not). It's fashionable on the left to mock conservatives for "not knowing" what critical race theory is, but that's not quite what's going on. Conservatives who use the term aren't referencing the academic framework used in graduate programs so much as they're deploying a code for what they actually object to, which is teaching historical facts about racism. It's about demanding that schools set aside truth in favor of cloying fables, just as Patrick demanded that the Bullock Museum set aside the truth about the Texas revolution in favor of a fanciful story that turns a violent, racist tantrum into a heroic act.

Trump's former secretary of state, Mike Pompeo — who has thoughts of a 2024 presidential campaign of his own — embodied this attitude over the weekend, launching this tweet:

If we teach that the founding of the United States of America was somehow flawed. It was corrupt. It was racist. That's really dangerous. It strikes at the very foundations of our country. https://t.co/WWwqs1VAo6
— Mike Pompeo (@mikepompeo) July 5, 2021

What is remarkable here is the blasé sense of entitlement to a truly preposterous lie, which is that the founding of America — or of any country, really — could be flawless. That's even before we get to indisputable facts, such as the one about slavery being both legal and enshrined in the Constitution, which make the assertion that the U.S. was racist as banal (and true) as saying that the U.S. is located in North America. Pompeo's stance is a repudiation of history itself, a demand that it be entirely replaced with myths. Worse, his view is increasingly the one shared across the entire Republican Party.

No wonder, then, that Trump's Big Lie about the 2020 election is so quickly becoming GOP canon. As a recent analysis from the Washington Post shows, of the nearly 700 Republicans who have already filed paperwork to run in 2022, "at least a third have embraced Trump's false claims about his defeat." And that's just the ones who repeat the lie — many, if not most, of the others feel like they can't object to it in any way, lest they face the fate of Rep. Liz Cheney of Wyoming.

A similar situation is unfolding with the Jan. 6 insurrection. As Media Matters detailed in a lengthy report for the six-month anniversary of that event, right wing media has spent the past half-year spinning out all manner of preposterous narratives to deny that the event was violent or insurrectionary or fascistic, even though the whole country saw, with our own eyes, an unbelievable amount of evidence that proves it was all those things. This is particularly encapsulated in the efforts to claim Ashli Babbitt, a rioter who was fatally shot in the melee, as some kind of victim and martyr — a narrative that Donald Trump, unsurprisingly, is now embracing. Babbitt's shooting was captured on video from multiple angles, making it indisputable that she lost her life because she was leading a mob intent on running down and attacking members of Congress. Yet she is being canonized on the right as "proof" that they're the ones being oppressed, even after they literally tried to steal a democratic election.

Do proponents of the Big Lie or insurrection revisionism actually believe their own nonsense? That's beside the point. Truth simply has no value to these folks. All that matters is power — and one way to exert power is to force the official narrative into the shape of a lie, untouched by even well-documented facts.

In a sense, this is nothing new. The right has long had an interest in replacing facts with its own bellicose myth-making. Evolutionary theory is attacked, because conservatives would rather imagine themselves in "God's image" than as primates. Climate change must be denied, because admitting that we should stop driving gas-guzzling pickups and SUVs is too much to bear for the fragile right wing ego. And heaven forbid anyone talk about how Martin Luther King Jr. had political views beyond that one line in his "I Have a Dream" speech.

But there should be no doubt that these narcissistic tendencies on the right have metastasized into a sense of overwhelming entitlement, a need to be swathed in thick blankets of lies such that not even a hint of unpleasant facts can even touch snowflake-fragile conservative egos. Trump's flagrant personality disorders have operated, over the years, as a permission slip to his followers to emulate his example. As we've seen over and over, he has petulantly demanded that all information around him be shaped into a flattering mirror, and believes no truth is too powerful not to be crushed to suit his overblown self-image. Now we are cursed with millions of mini-Trumps, staging tantrums at school boards and CDC ads about vaccines, in an endless narcissistic rage that anyone would dare rattle their world by saying stuff just because it's true.