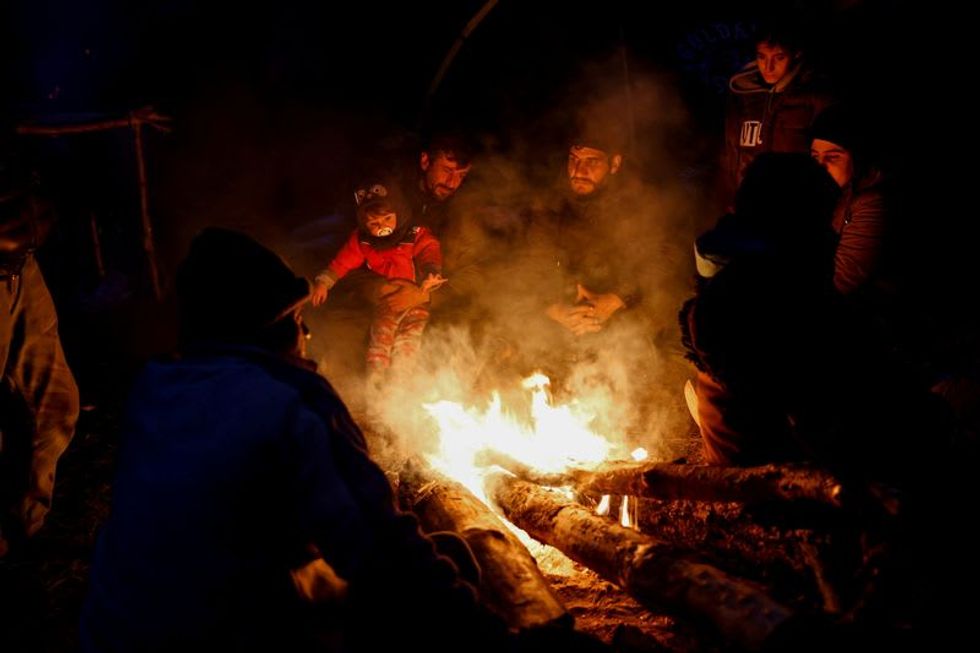 BRUSSELS/WARSAW/MOSCOW (Reuters) - The European Union agreed on Monday to step up sanctions against Belarus, which denounced as "absurd" Western accusations that it was driving a migrant crisis that has left up to 4,000 people stranded in freezing forests on its border with Poland.

EU foreign ministers want to increase pressure on Belarus, which they say is pushing migrants towards the bloc in revenge for earlier sanctions over a crackdown on protests last year against veteran leader Alexander Lukashenko's contested re-election.

Migrants - mostly from Iraq and Afghanistan - began appearing on Belarus' land borders with the EU this year, trying to cross into member states Lithuania, Latvia and Poland via routes not used before.

"This inhumane system of using refugees as tools to exert pressure on the European Union ... has got worse over the last days," said Germany's foreign minister Heiko Maas.

"We will toughen sanctions on individuals who are involved in this human trafficking, and we will have to talk about the fact that severe economic sanctions are inevitable."

Monday's unanimous political agreement among EU countries must be worked out in detail before specific new sanctions come into force.

Stranded on the Belarusian side of the border and increasingly desperate, migrants have tried to force makeshift fences in several places in recent days. Poland has reported 5,100 irregular attempts to cross the border so far in November.

Latvia said on Monday it had deployed 3,000 troops for a previously unannounced military exercise near the border. It, Lithuania and Poland make up the eastern flank of the EU and NATO, the paramount Western military alliance.

The top EU diplomat, Josep Borrell, said the new package of sanctions would target airlines and travel agencies involved in "this illegal push of migrants".

EU executive said it was looking into whether other airlines should face sanctions after the bloc banned Belarus' state-owned carrier Belavia from its skies and airports. Germany's Maas stressed Turkish Airlines had stayed away.

The Belarusian foreign ministry dismissed as "absurd" accusations that Minsk had engineered the migrant crisis, according to Russian state news agency RIA.

Lukashenko said Belarus was trying to convince migrants to go home. "But nobody wants to go back," he said, according to Belarus' state news agency Belta. Minsk would retaliate against any new EU sanctions, he was quoted as saying.

The EU has been stepping up sanctions on Belarus for months. Curbs already in place include blacklisting of Lukashenko, his son and 165 other Belarusian officials, as well as restrictions on trade in potash, an important export.

The EU called on Lukashenko's most powerful ally, Russian President Vladimir Putin, to put pressure on Minsk to stop risking people's lives in a geopolitical tug-of-war.

"It is obvious what Lukashenko's regime and its allies want - to test unity of the Western world," said Lithuanian President Gitanas Nauseda.

Vilnius says some migrants fly to Belarus via Moscow and wants the EU to "make the Minsk airport a no-fly-zone," according to Lithuanian foreign minister.

The Kremlin said it was ready to mediate between Belarus and the EU, that Putin would talk to Lukashenko, and that Moscow had no plans to reroute gas flows away from Belarus despite Minsk threatening to cut transit to Europe through the Yamal pipeline.

Peskov said Russia was already acting as an intermediary while the EU's chief executive said coming days would be decisive.

At least eight people have died along the 200 kilometre long land border between Poland and Belarus, including from cold and exhaustion. The sparsely populated area of lakes, swamps and forests is becoming even more hostile to people trying to keep warm around bonfires through the cold November nights.

Polish border guards said on Monday several hundred people had gathered on the Belarusian side of a closed border crossing point in Kuznica and might try to get into Poland.

Maas and Borrell urged Warsaw to allow humanitarian aid on the frontier, where Poland has deployed some 20,000 police, border guards and soldiers.

Poland's nationalist government also came under criticism from rights activists for seeking to cut off all the migrants without giving individuals a chance to claim asylum.

Eastern EU states Lithuania, Latvia and Estonia have warned of a risk of military conflict. Their presidents and Poland's Andrzej Duda said on Monday Lukashenko should be held accountable for human trafficking.

Poland and Lithuania are considering requesting NATO consultations on the situation under the military alliances' collective security provisions.