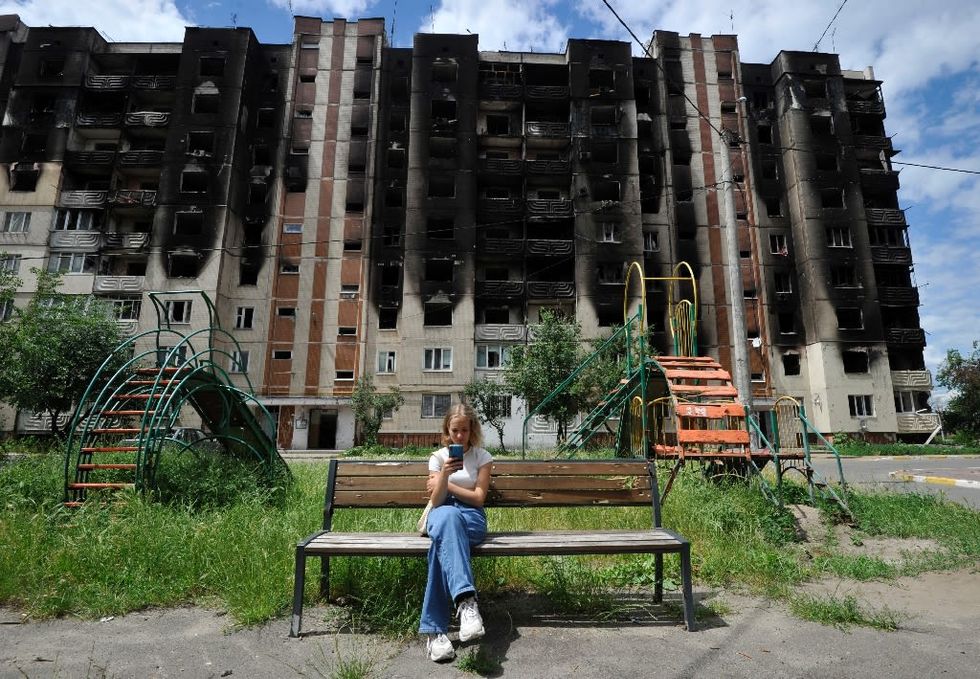 A girl looks at her smartphone as she sits on a bench in front of residential buildings partially destroyed by shelling in the town of Irpin, near the Ukrainian capital of Kyiv, on June 16, 2022

Kyiv (Ukraine) (AFP) - The European Union's most powerful leaders on Thursday embraced Ukraine's bid to be accepted as a candidate for EU membership, in a potent symbol of support in Kyiv's battle against Russia's invasion.

Later joined in Kyiv by Romania's President Klaus Iohannis, they met their Ukrainian counterpart Volodymyr Zelensky, who has been lobbying his western allies for more and faster weapons deliveries and the promise of a European future.

"All four of us support the status of immediate candidate for accession," Macron told a joint press conference with his EU colleagues.

Draghi agreed: "The most important message of our visit is that Italy wants Ukraine in the EU."

Scholz said Ukraine "belongs in the European family" and vowed: "We are supporting Ukraine with the deliveries of weapons. We will keep doing that for as long as it is needed."

Zelensky promised Ukraine was ready to put in the work to become a fully-fledged EU member, and said Ukrainians has already proved themselves worthy of candidate status.

"Ukraine has gotten the closest to EU it has ever been in the history of its independence," he said later in his daily address.

The European Commission will meet Friday to give its official opinion on Ukraine's formal bid for EU candidacy, which must be approved by all 27 member states.

Once a candidate, it may take several years for Ukraine -- already a poor country with a reputation for corruption before Russia's assault -- to meet membership criteria.

Zelensky said the leaders "understood" that, 113 days into the war, peace talks with Moscow had stalled "exclusively because of the position of Russia."

"They don't want it. This is an aggressor, it needs to decide for itself that the war needs to be ended," he said in his daily address.

Earlier, he said he explained to the visiting leaders "our essential needs in the field of defence."

"We are expecting new deliveries, above all heavy weapons, modern artillery, anti-aircraft defence systems," he said, even as Macron said France would send six Caesar self-propelled howitzers to add to the 12 already deployed on Ukraine's eastern front.

Moscow was dismissive of the European visit, and of the arms supplies.

"Supporting Ukraine by further pumping Ukraine with weapons" would be "absolutely useless and will cause further damage to the country," warned Kremlin spokesman Dmitry Peskov.

The visit came as Moscow stepped up the energy pressure on Europe, with Russian gas giant Gazprom on Thursday defending cuts while prices soared.

EU countries have scrambled to reduce their dependency on Russian energy but are divided about imposing a natural gas embargo as several member states are heavily reliant on Moscow.

Gazprom CEO Alexei Miller said that the state-run company will play by its own rules after cutting daily gas supplies to Germany and Italy.

"We don't play by rules we didn't create," Miller said in St Petersburg.

Draghi and Zelensky both accused Russia of intentionally limiting supply, with the Italian leader accusing Gazprom of "lies" and of using its energy dominace for "political" ends.

He spoke as the US also called on Russia Thursday to open the ports and allow the grain to be exported.

"This is serious thing, we shouldn't be using food as a weapon," US Agriculture Secretary Tom Vilsack told reporters at the United Nations.

With grain prices soaring internationally and key importers in the Middle East and Africa facing supply shortfalls, Moscow has demanded that economic sanctions on it be lifted in exchange for allowing the exports.

Also on Thursday, Europe and the United States expressed concern for the fate of foreign nationals captured by Russia during the fighting in Ukraine.

The State Department also said that a third American was believed to be missing in addition to two military veterans who were reportedly seized by Russian forces last week.

Meanwhile the European Court of Human Rights (ECHR) on Thursday told Russia to prevent the execution of a Moroccan man sentenced to death along with two British men for fighting on behalf of Ukrainian forces.

And fighting in eastern Ukraine remained focused on the industrial city of Severodonetsk, where Russian forces appear close to consolidating control after weeks of intense battle.

Sergiy Gaiday -- the governor of the Lugansk region, which includes the city -- said Thursday around 10,000 civilians remain trapped there, out of a pre-war population of some 100,000.

Kyiv's army is "holding back the enemy as much as possible," he said on Telegram.

"For almost four months they have dreamt of controlling Severodonetsk... and they do not count the victims."