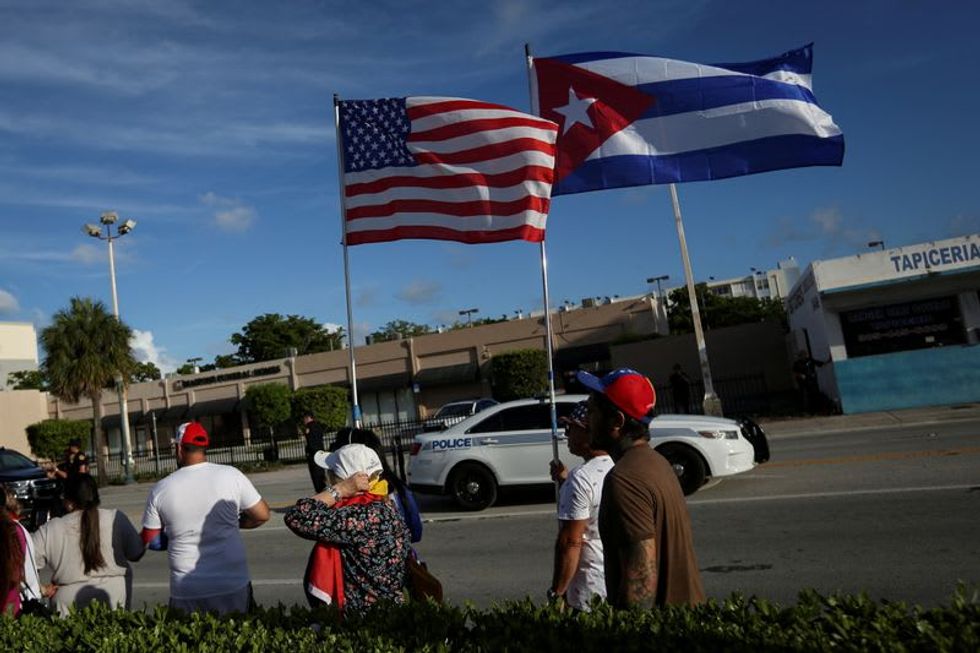 WASHINGTON (Reuters) - The United States is expected to soon announce initial steps as part of the Biden administration’s review of Cuba policy and in response to Havana's crackdown on the biggest street protests in decades, State Department officials said on Monday.

The senior officials’ comments further signaled that President Joe Biden was not ready to soften the U.S. approach after his predecessor, Donald Trump, rolled back a historic Obama-era détente with Havana, and that the latest Cuban unrest would have a significant impact on any policy moves.

The officials, speaking to Reuters on condition of anonymity, also made clear that the Biden administration is still seeking ways to ease the humanitarian plight of the Cuban people while keeping pressure on the Communist-led government in Havana.

Biden said last week he was not prepared to loosen restrictions for now on remittances, or payments that Americans can make to their families on the island, because of concern that the Cuban government would seize a large part of the funds.

But Washington is looking closely at crafting a possible work-around to restore the flow of remittances, which were shut down under Trump, in a way that does not put money in the hands of the Cuban government, one of the State Department officials said.

The official declined to elaborate but suggested it would take time to develop such a mechanism, saying: “I wouldn't anticipate a short-term loosening."

Thousands of Cubans staged spontaneous anti-government protests a week ago to demonstrate against an economic crisis that has seen shortages of basic goods and power outages. They were also protesting the government's handling of the coronavirus pandemic and curbs on civil liberties. Scores of activists were detained.

The unrest appears to have injected a new sense of urgency in the Cuba policy review, which began shortly after Biden took office in January but until now had not been treated as a top agenda item while the administration dealt with the economic recovery and coronavirus pandemic at home and challenges such as China, Russia and Iran abroad.

“There will definitely be policy implications as a result of the events over the course of the last week. ... I'd expect in fairly short order there will be a senior U.S. government communication as to initial steps," one official said while declining to provide specifics.

Cuba, the official said, is now a “top priority.” “It's a historic moment in Cuba given that the protesters showed up to more than 58 locations throughout the island numbering tens of thousands, making demands of their government for change,” the official said.

Under consideration as part of the review – even before the protests occurred - is whether to lift the U.S. designation of Cuba as a "state sponsor of terrorism," a label Trump gave to Havana just days before leaving office.

But the State Department official said there was no timeline for a decision on the issue.

Also figuring into the over-arching Cuba policy review is Cuba’s continued support for Venezuela’s Socialist president, Nicolas Maduro, whose government is also under sanction by the United States, the State Department official said. Maduro has retained power with the support not only of his military and Cuban allies but of Russia, China and Iran.

Biden, a Democrat, had vowed during his presidential campaign to ease some of the sanctions on Cuba tightened by Trump, a Republican.

But analysts say the protests have complicated Biden’s political leeway to do so, especially after he made a poorer-than-expected showing with voters in south Florida’s anti-communist Cuban-American community, which backed Trump’s tough policies toward Havana and Caracas and helped him win the battleground state.

Many analysts say Biden may have to tread carefully on Cuba policy ahead of the 2022 congressional elections.