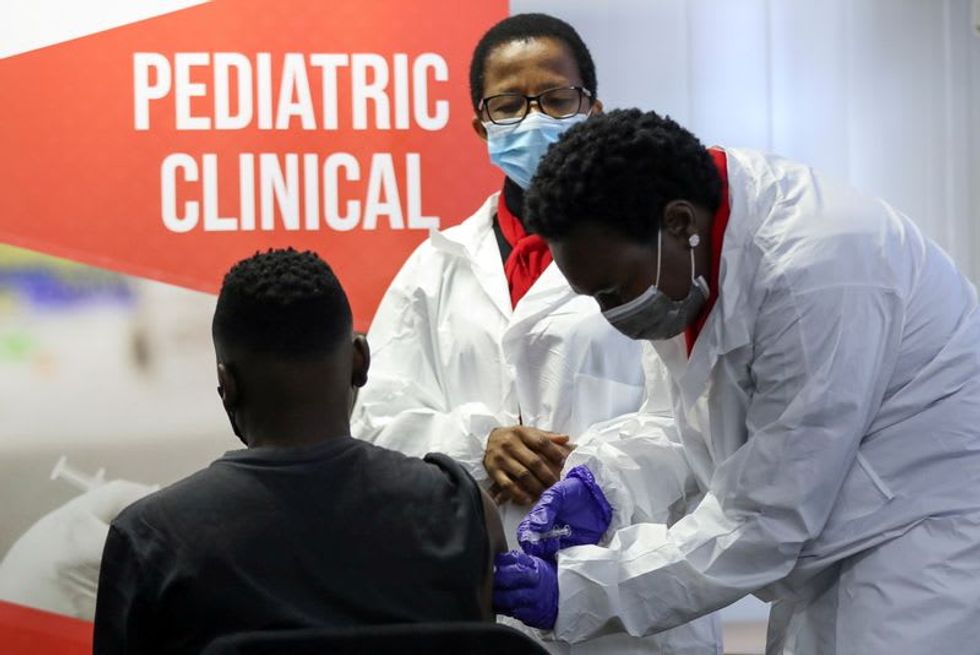 LONDON (Reuters) - Africa has little chance of overcoming the COVID-19 pandemic unless 70% of its population is vaccinated by end-2022, yet "extreme vaccine discrimination" is leaving the continent behind, a report published on Monday said.

The discovery of the Omicron variant in southern Africa has heightened claims that low inoculation rates can encourage viral mutations, which can then spread to countries where rates are much higher.

Yet only five of Africa's 54 countries are on track to reach a World Health Organisation target of fully vaccinating 40% of the population by end-2021, the Mo Ibrahim Foundation said in a report on COVID-19 in Africa.

One in 15 Africans has been fully vaccinated, against nearly 70% in the G7 group of richer nations, according to data from the foundation, which was set up by the Sudanese telecoms billionaire to promote better governance and economic development in Africa.

"From early in this crisis, our Foundation and other African voices have been warning that an un-vaccinated Africa could become a perfect incubator for variants," its chair Mo Ibrahim said in a statement.

"The emergence of Omicron reminds us that COVID-19 remains a global threat, and that vaccinating the whole world is the only way forward," he added. "Yet we continue to live with extreme vaccine discrimination, and Africa in particular is being left behind."

Vaccines have been in short supply in Africa after developed countries secured initial orders from pharmaceutical companies and the global vaccine-sharing programme, COVAX, got off to a slow start.

Deliveries of vaccines to Africa have picked up in recent months, but weak healthcare systems and limited infrastructure are holding back rollouts once they arrive, the report said.

There has also been confusion over short expiry dates on donated vaccines, which has led to the destruction of some.

Monday's report said the pandemic had exposed the weakness of African civil registration capacities, with just 10% of African deaths officially registered. Weak systems raised the possibility that vaccination rates were even lower than official statistics showed.

The foundation also said threadbare social safety nets must be strengthened to protect the vulnerable - the average spend in Africa on COVID-19 response measured as a share of GDP excluding healthcare was 2.4%, less than half the global average.