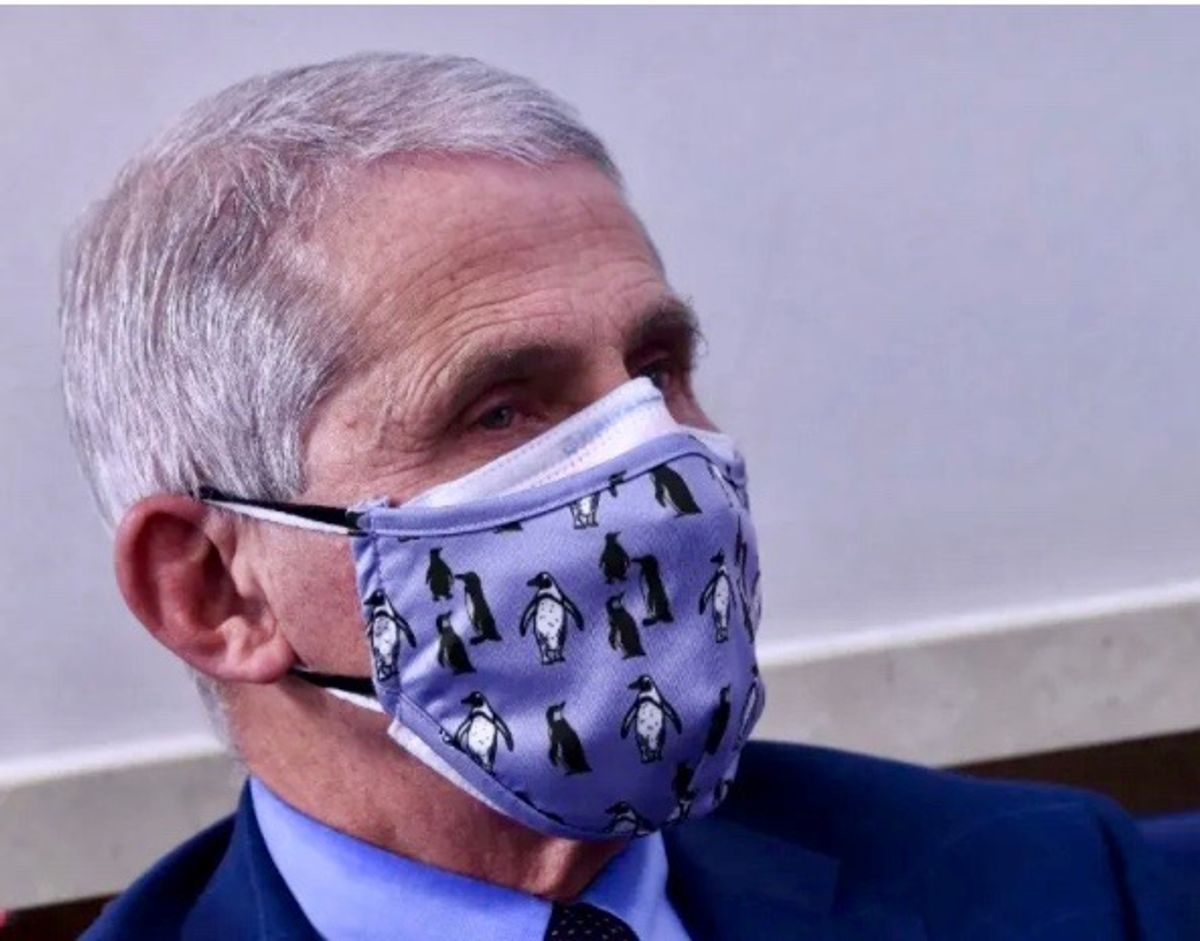 Dr. Anthony Fauci, President Joe Biden's top medical adviser, said in an interview late Tuesday that he is "quite agnostic" on whether the World Trade Organization should temporarily suspend coronavirus vaccine patents, a purportedly neutral position that critics decried as unacceptable amid soaring coronavirus cases and deaths across the developing world.

"There is no reason why the government can't just mandate full-tilt vaccine production and distribution from existing sources while generic production is being built out. It's a completely false choice."
—Zach Carter, Omidyar Network

On the eve of the WTO's Wednesday discussion of India and South Africa's proposed patent waiver—which the U.S. and other rich countries have blocked for months—Fauci told MSNBC's Mehdi Hasan that even if vaccine-related intellectual property protections were suspended, it could take years to transfer necessary technology to manufacturers in other countries.

"I'm not against transferring technology, and I'm agnostic about the TRIPS waiver," said Fauci, who declared that his chief concern is getting people around the world vaccinated as quickly as possible—a goal he suggested would not be accomplished by temporarily lifting vaccine patents.

"If that means getting billions of doses from companies and getting them to the people in the lower-middle-income countries at a very, very low price that they can afford, do it and do it now," Fauci added. "Because if you want to start transferring technology, you're gonna get it to them a year and a half from now."

Fauci: "I'm really quite agnostic [on Covid patent waivers]."
Me: "How can you be agnostic, you're the chief medical adviser [to the President]?"
Watch my exchange with Dr Anthony Fauci on whether the U.S. should vote to waive patents on Covid vaccines:pic.twitter.com/fLK1q548O0
— Mehdi Hasan (@mehdirhasan) May 5, 2021

Observers were quick to dispute Fauci's claim that it could take more than a year to transfer vaccine technology to overseas manufacturers that say they are ready to begin mass-producing coronavirus vaccines.

Zach Carter, a writer in residence at the Omidyar Network who has previously reported on the pharmaceutical industry's intellectual property protections, tweeted that Fauci's characterization of the patent waiver issue was "extremely misleading."

"He simply asserts that it would take a year and a half to transfer vaccine technology from existing patent holders to generic manufacturers. This is silly," said Carter. "There is no reason why the government can't just mandate full-tilt vaccine production and distribution from existing sources while generic production is being built out. It's a completely false choice."

"If world governments mandate that you turn over the technology ASAP, it can move a lot faster than 18 months," Carter continued. "It happens all the time when governments issue compulsory licenses. Less than a year after the Covid-19 pandemic hit the U.S., we had researched and developed a vaccine that was being distributed to citizens. But copying this existing technology for more providers will require a fresh 18 months. Get real."

In response to Fauci's interview, Akshaya Kumar of Human Rights Watch pointed to recent comments by Moderna's former director of chemistry Suhaib Siddiqi, who told the Associated Press in March that with technical details and vaccine formulas in hand, a modern factory should be able to begin producing vaccines in three to four months at most.

"In my opinion, the vaccine belongs to the public," said Siddiqi. "Any company which has experience synthesizing molecules should be able to do it."

Waiving COVID patents is in no way mutually exclusive with giving vaccine doses to countries now. If Dr. Fauci's position is to do whatever is necessary to get doses in people as fast as possible, he should be arguing passionately to do BOTH. https://t.co/hC1QxSTDDZ
— Saikat Chakrabarti (@saikatc) May 5, 2021

"You don't get the privilege of being 'agnostic' when you are the chief medical adviser to the president," added Chakrabarti. "There is no such thing as agnostic. Agnostic means doing the status quo, which is itself a decision."

Fauci's comments came hours before WTO member nations gathered Wednesday to resume talks on a proposed patent waiver first introduced by India and South Africa in October. If approved by consensus at the WTO, the waiver would help enable generic manufacturers to replicate vaccine recipes and ramp up production to meet urgent global needs.

But as AP reported from the gathering Wednesday morning, "No consensus—which is required under WTO rules—was expected to emerge from the ambassadors' two-day meeting on Wednesday and Thursday."

"Co-sponsors of the idea were shuttling between different diplomatic missions to make their case, according to a Geneva trade official who was not authorized to speak publicly on the matter," AP noted. "A deadlock persists, and opposing sides remain far apart."

Despite broad global support for the patent waiver—including among a growing coalition of U.S. lawmakers—Biden told reporters ahead of Wednesday's meeting that he has not yet decided whether to throw U.S. support behind the proposal, which is also opposed by the United Kingdom and European Union members.

In a letter to Biden on Tuesday, a majority of House Democrats argued that the patent waiver is "vital to ensuring sufficient volume of and equitable access to Covid-19 vaccines and therapeutics around the world."

"As Covid-19 ravages the globe, we know that any vaccine or therapeutic pharmaceutical corporations develop with public money is 100% ineffective for those that cannot access it," the lawmakers wrote. "We need to make public policy choices, both in the U.S. and at the WTO, that put lives first."