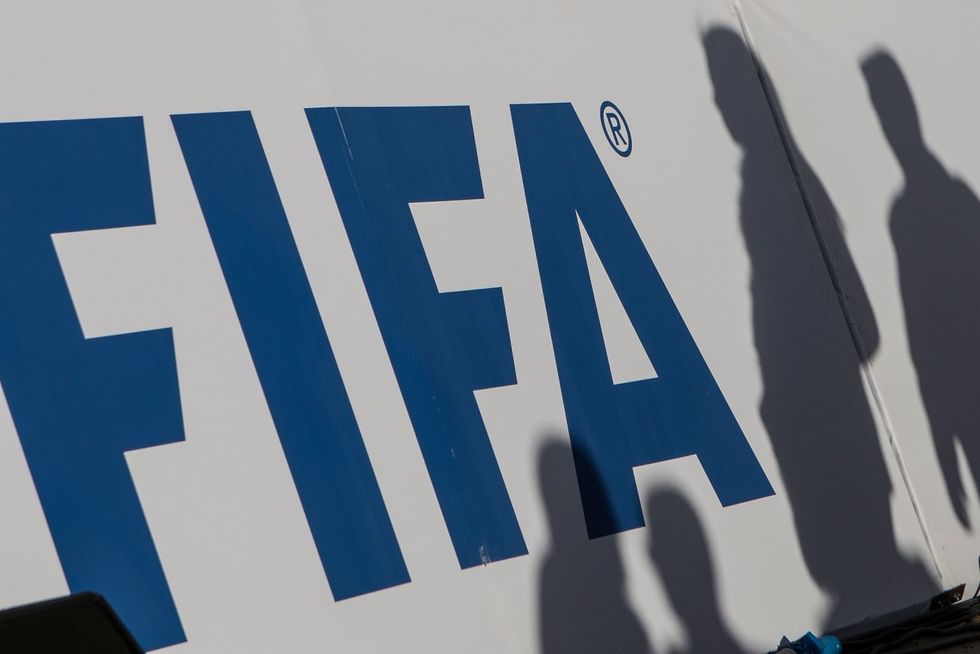 The shadows of spectators can be seen on a FIFA banner. World football's governing body FIFA has decided that no international competition shall be played in Russia, with home matches being played on neutral territory and without spectators. Omar Zoheiry/dpa

World football's governing body FIFA decided on Sunday that no international matches should be played in Russia and that its flag and anthem were not welcome, but stopped short of kicking them out of the World Cup for now.

French Football Federation president Noël Le Graët earlier became the first significant figure in the sport to suggest Russia should be thrown out of the men's World Cup following the invasion of Ukraine.

Poland, Sweden and the Czech Republic have refused to play Russia next month in the play-offs for the tournament in Qatar in November. Poland and Sweden said FIFA's punishment did not go far enough.

FIFA, in what it said were "initial measures" against the 2018 World Cup hosts, said in a statement that no international game shall be played in Russia with home matches being played on neutral territory and without spectators.

"FIFA will continue its ongoing dialogue with the IOC, UEFA and other sport organisations to determine any additional measures or sanctions, including a potential exclusion from competitions, that shall be applied in the near future should the situation not be improving rapidly," the statement continued.

"That is my first impulse," Le Graët told Le Parisien newspaper when asked if Russia should be banned from the World Cup. "The world of sport, and football in particular, cannot remain neutral. I will certainly not object to Russia's exclusion."

The Czechs joined Poland and Sweden from Saturday in refusing to face Russia in the play-offs for Qatar regardless of the match venue.

A statement Sunday said the executive committee of the Czech football federation and players agreed it was "not possible to play against the Russian national team in the current situation".

Poland were first to say they would not play Russia in their March 24 play-off semi-final even if the tie was moved from Moscow. The winner of Sweden v Czech Republic in the other path B semi-final were then scheduled to go to Russia, if they won, for the March 29 final.

The English FA has also said it will not play Russia for "the foreseeable future".

Russia is becoming increasingly isolated in the sporting world and European football's ruling body UEFA had already said matches cannot be played in Russia or Ukraine, with RB Leipzig's Europa League tie with Spartak Moscow next month up in the air.

UEFA is also set to consider the sponsorship deal it has with Russian state energy firm Gazprom.

Hans-Joachim Watzke, interim president of the German football federation (DFB), said it was "dirty money" that "we cannot take any more" while DFB presidential candidate Peter Peters said it was "a clear yes" to ending the cooperation.

Gazpom sponsors the Champions League and Euro 2024 in Germany but Schalke, a German second division side, have already removed their name from their shirts.

The junior swimming world championships in Russia's Kazan in August have been cancelled.

Volleyball is one of the few sports still considering a major event in Russia with the men's world championships scheduled for August. This is under review though with some nations saying they will not travel to Russia to take part. Many airlines will not fly there.

Putin has reached the level of black belt in the sport.