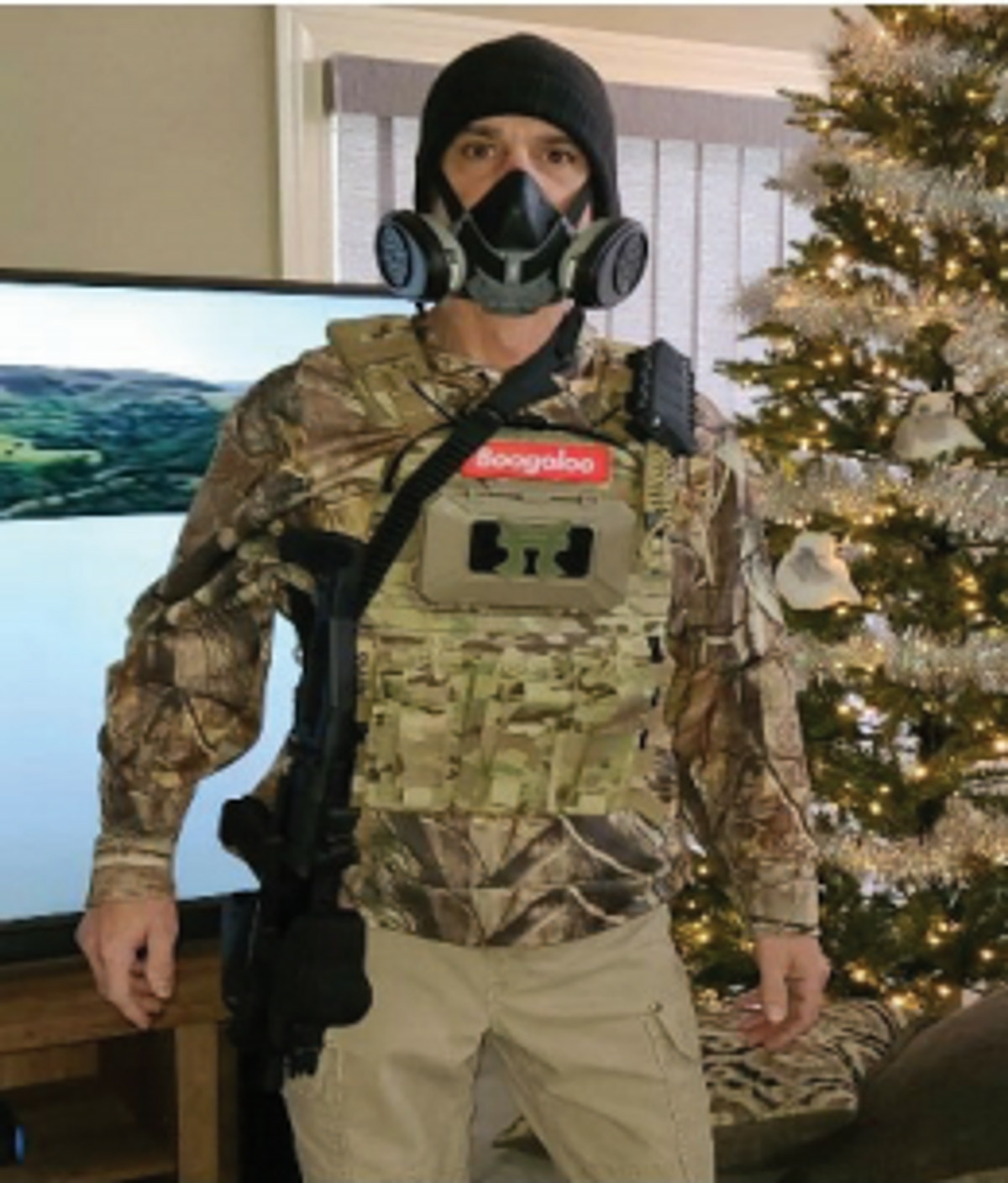 The first rioter involved in the Jan. 6 siege on the US Capitol who is overtly identified with the boogaloo movement has been arrested by the FBI.

An affidavit supporting a criminal complaint and arrest warrant cites a tip from an unidentified witness indicating that Steven Thurlow, a Michigan resident and Army veteran who was deployed to Saudi Arabia in 1990, went inside the Capitol during the Jan. 6 riot. The affidavit includes a photo retrieved from Thurlow's Facebook page that shows him posing in tactical gear next to a Christmas tree.

"Image 1 shows a man in camouflage tactical gear with a 'Boogaloo' patch on his chest, as well as a 'Torii' patch on the body armor," the affidavit reads. "Based on my training, experience, and other investigations, I know that the 'Boogaloo' is a term referencing a violent uprising or impending civil war. The term is sometimes used by militia extremists and racially or ethnically motivated violent extremists (RMVE), who allude to it using shorthand such as 'big igloo' or 'big luau' and imagery such as igloos or Hawaiian shirts."

Among more than 500 people charged so far in the assault on the US Capitol, Thurlow is the first to be identified in government court filings as being associated with the boogaloo movement. But the affidavit supporting Thurlow's arrest suggests wider involvement in the violent but ideologically amorphous movement. The author of the affidavit, whose name is redacted but is identified as an FBI special agent "responsible for investigating domestic terrorism" says they are "aware that a number of Boogaloo members participated in the January 6, 2021 riot on the US Capitol."

CCTV footage of Thurlow reportedly shows him walking through the halls of the Senate side of the Capitol building "wearing a black backpack, black watch cap, a camouflage colored jacket, gray pants, yellow scarf and white-rimmed sunglasses.

In photo provided to the FBI by a witness that was reportedly taken from Thurlow's Facebook page, Thurlow comments, "The commies just fired this riot disbursement device at us. Guess what, didn't dispense."

The Christmastime photo of Thurlow in tactical gear includes the comment, "Ahh nothing like a new pair of 511's and fresh set of level IV SAPI's in the plate carrier to go 'peacefully protest' with."

The special agent explains in the affidavit that they are "aware that 'SAPI' refers to a Small Arms Protective Insert, and that a Level IV 'SAPI' plate is a high-level ballistic body armor plate that is rated to withstand a direct hit by a high-muzzle velocity armor piercing bullet."

FBI agents believe that after the Jan. 6 insurrection, Thurlow changed the name on his Facebook profile to "Stephanie Danielle Thurlow." The URL for the page still displays the name "steven.t.thurlow" and also includes the quote "you have never lived till you have almost died." The profile displays photos of men in military uniform that appear to be from Thurlow's deployment to Saudi Arabia, as well as a 2019 post showing Thurlow with two younger men at Stone Mountain Park in Georgia. The photo shows Thurlow wearing a 101st Airborne Division shirt while posing in front of the giant rock engraving of Confederate leaders, which has long provided a rallying point for the Ku Klux Klan and other white supremacists.

The affidavit notes that the "Torii" patch on Thurlow's body armor alongside the "Boogaloo" patch in the recent photo "is a symbol used by the 187th Infantry Regiment, 3rd Brigade, 101st Airborne Division" and "is known as a gateway to honor and is used extensively by the unit."

Thurlow's LinkeIn profile indicates that he has worked mostly as a concrete finisher since his discharge from the military, but his most recent position is listed as a senior instructor for 210 DownrangE Gunsmithing.

While searching for Thurlow's Facebook account, FBI agents discovered that his son, also named Steven Thurlow is currently serving in the US Army.

The affidavit supporting Thurlow's arrest was published today by the Program on Extremism at Georgetown University, but at publication time no information was available on PACER, the federal court records clearinghouse, on the case.