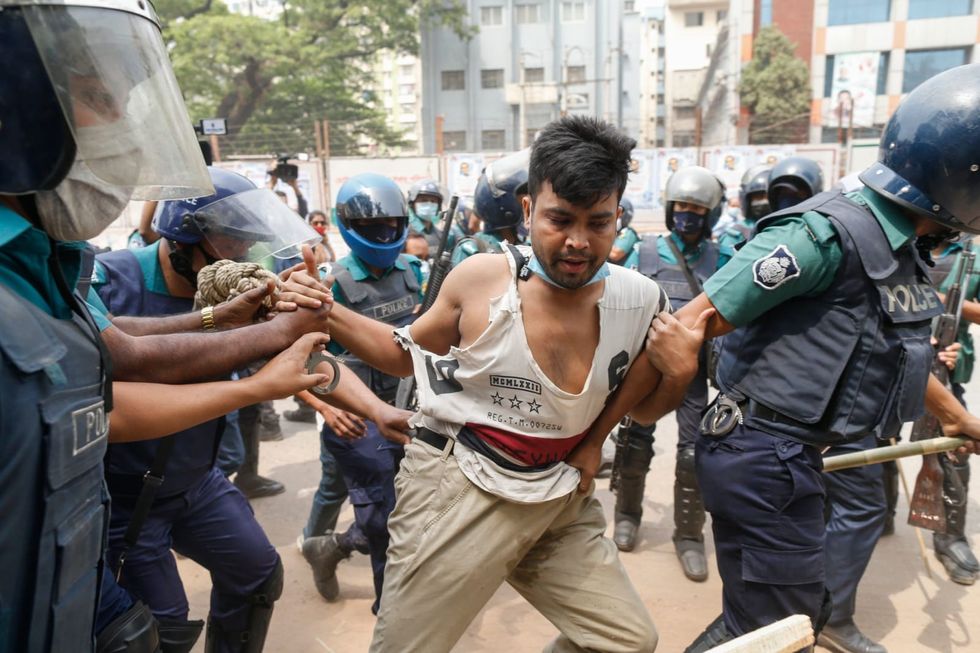 Protest against Indian prime minister's visit in Dhaka - Bangladeshi police arrest a protester in front of the National Press Club during a protest against the visit of Indian Prime Minister Modi. - Suvra Kanti Das/ZUMA Wire/dpa

Five more Islamist activists have died in clashes with security forces during the second day of protests against Indian Prime Minister Narendra Modi's visit to Bangladesh, officials and hospital staff said on Saturday.

Four of them were shot during clashes between the Islamic group Hefazat-e-Islami Bangladesh and the Border Guard Bangladesh (BGB) in the eastern district of Brahmanbaria, Abdul Momin Fuad, a local leader of the group, told reporters.

The fifth activist was shot dead when activists from the ruling Awami League party attacked the group, he added.

Abdullah Al Mamun, a medical officer at the district's main public hospital, confirmed that three bodies covered in bullet injuries were brought to the hospital in the evening from the protest site, and two among at least 20 others admitted with bullet wounds died later.

On Friday, four activists were shot dead in Chattogram while another man died in Brahmanbaria as demonstrators clashed with police on the day the Indian premier arrived in Dhaka to join Bangladesh’s golden jubilee celebration of independence.

Modi is a hated figure among some groups in Bangladesh. He has been accused of inciting a riot against Muslims in 2002 while he was chief minister of the Indian state of Gujarat, in which at least 1,000 people were reportedly killed.

"Donald Trump’s new social media company and its special purpose acquisition company partner say the partner has agreements for $1 billion in capital from institutional investors. The former president launched his new company, Trump Media & Technology Group (TMTG) in October. He unveiled plans for a new messaging app called "Truth Social" to rival Twitter and the other social media platforms that banned him following the Jan. 6 insurrection at the U.S. Capitol," the Associated Press reported Sunday.

Right-wingers want to build their own digital echo chamber -- there's just one big problem with that: report

In an effort to counter what they see as a growing liberal dominance in this particular space, conservatives are building their own apps, phones, cryptocurrencies, and publishing houses, Axios reports.

As Axios points out, many of these ventures wouldn't be possible without the backing major financiers who are on a mission to fight back against "cancel culture" and other conservative grievances.