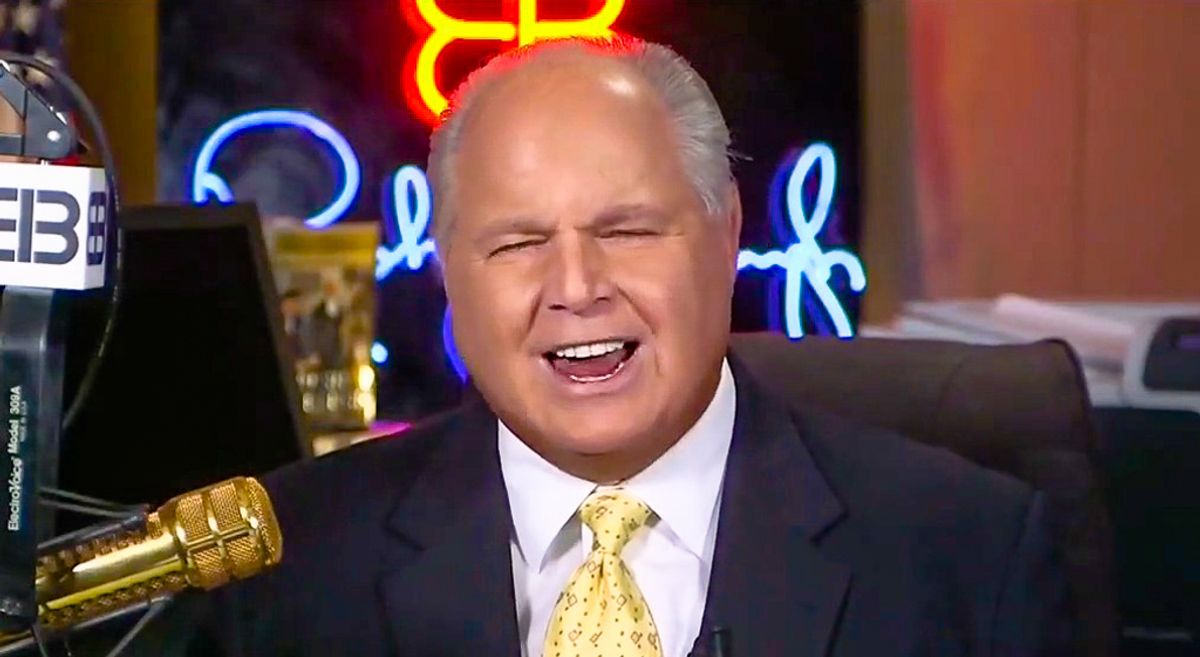 “I know they're still figuring out the [funeral] arrangements but what we do when there's things of this magnitude, once the date of internment for Rush is announced, we're going to be lowering the flags to half-staff," DeSantis, a devout Trump supporter, told residents in Palm Beach County, as local NBC affiliate WFLA reports.

“There's not much that needs to be said, the guy was an absolute legend," DeSantis continued. “He was a friend of mine and just a great person."

"There's not much that needs to be said, the guy was an absolute legend."@GovRonDeSantis announced this morning he will lower flags in the state in honor of Rush Limbaugh, the conservative radio host who died earlier this week.https://t.co/RCQKnFMomd pic.twitter.com/LQtewzlFqr
— WFLA NEWS (@WFLA) February 19, 2021

Among the most frequent responses to Limbaugh's passing on Wednesday were reminders of how the far right wing radio "shock jock" during the height of the HIV/AIDS crisis would joyfully read aloud the names of the disease's victims, often to music.

"Iowa's Cedar Gazette reported in 1990 that Limbaugh's 'AIDS Update,' a recurring segment in which he made jokes about a disease that had killed more than 100,000 people in the United States the previous decade," Snopes reported after Limbaugh's death, "started by playing songs such as 'Back in the Saddle Again,' 'Kiss Him Goodbye,' 'I Know I'll Never Love This Way Again,' and 'Looking for Love in All the Wrong Places.'"

Media Matters put together this clip of some of Limbaugh's vile lies and attacks (caution: trigger warning):

The announcement DeSantis will order flags flown at half-staff was met with anger and shock from some parts of the state.

Ron DeSantis has the flags at half mast for Rush Limbaugh. I wish he would treat the 30,000 Floridians who died from Covid on his watch with as much respect.
— Remove Ron (@RemoveRon) February 19, 2021

Rush Limbaugh weaponized his platform to spread racism, xenophobia and homophobia across the nation. His constant hateful rhetoric caused untold damage to our political landscape. DeSantis' decision to honor him is an embarrassment to Florida.https://t.co/MkzU46Krzj
— Debbie Wasserman Schultz (@DWStweets) February 19, 2021

Ron DeSantis has ordered Florida flags to be lowered at half staff for his hero and mentor Rush Limbaugh. Florida is better than this. Help us end the political career of Ron DeSantis and join our movement at @removeron
— Daniel Uhlfelder (@DWUhlfelderLaw) February 19, 2021

Ron Desantis ordered flags at half mast for Rush Limbaugh but shows zero empathy for the nearly 30,000 Floridians who have died under his watch throughout this pandemic.
— Thomas Kennedy (@tomaskenn) February 19, 2021

.@GovRonDeSantis, it was appropriate to honor Justice Ginsburg. She met a very high standard. Rush Limbaugh does not.
Limbaugh's racist statements are numerous. Google them. How dare you lower Florida flags for a racist? https://t.co/rxIsFK95MI — Gwen Graham (@GwenGraham) February 19, 2021

Desantis ordering Florida flags flown at half mast for Rush Limbaugh (Palm Beach resident). Somehow this seems like an abuse of power. He didn't do that for any of the 29,474 people who died in Florida from covid.
— Rich Engstrom (@rdengstrom) February 19, 2021

DESANTIS: "we must have flags at half-staff for Rush Limbaugh."
also DESANTIS: "WE MUST RUN OVER BLACK LIVES MATTER PROTESTORS WITH CARS AND MAKE IT LAW." link ----> https://t.co/tLROwc8RL3 https://t.co/DxoGFOeMTZ pic.twitter.com/BK5JvTtOp2 — Colin Kaepernick 7️⃣ Was Exiled Exercising Rights (@RickStrom) February 19, 2021

Florida. Today DeSantis said he's lowering the flags to honor Rush Limbaugh. Every Jewish, Black and Hispanic voter should be appalled, and vote him out in 2022. https://t.co/8CoCKSYYgI
— Madeline Phillips (@MadelinePhilli1) February 19, 2021

By ordering flags to be flown at half-staff for Rush Limbaugh, these are the words ron DeSantis is elevating. Its disgusting. It's embarrassing to our state. Florida is better than this.https://t.co/KNEpueBR1b
— Ted Deutch (@TedDeutch) February 19, 2021