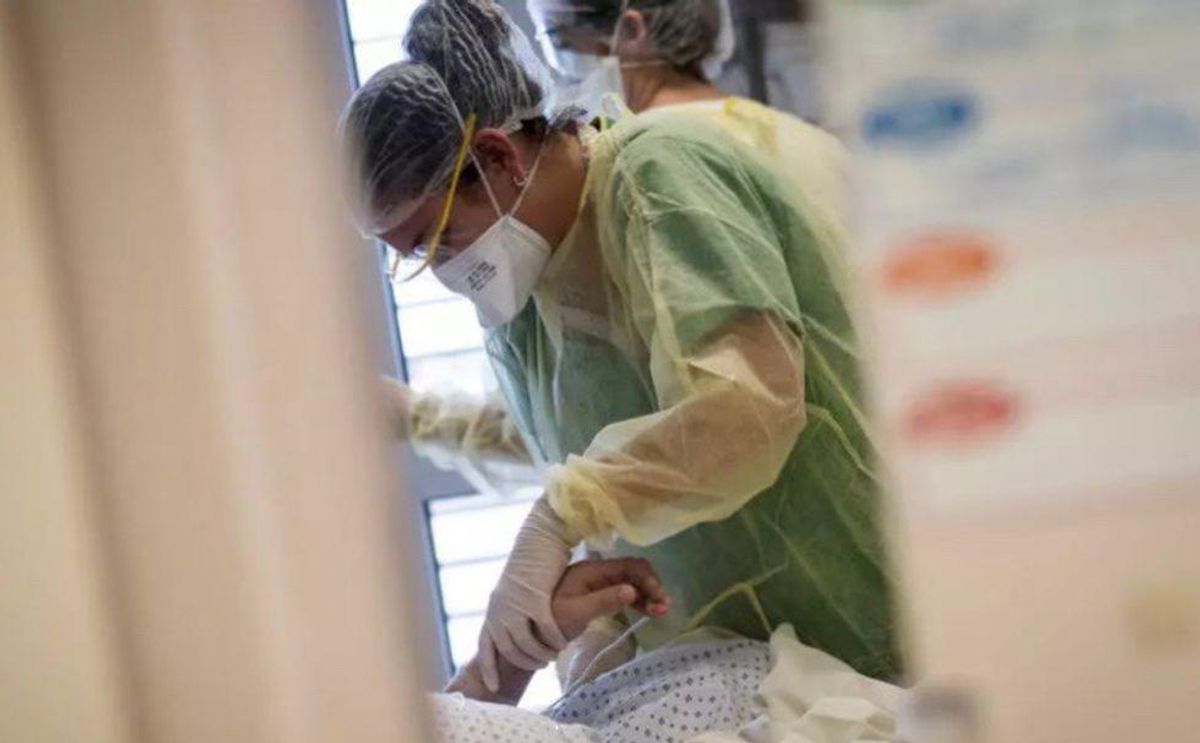 A nurse prepares a patient infected with coronavirus at the intensive care service of the Nantes CHU hospital, on May 19, 2020.( AFP)

One of the ways to gauge the severity of a COVID-19 surge in a particular state or city is how busy funeral homes become — and in Florida, according to CBS News, employees of funeral homes are absolutely swamped.

In July, the Centers for Disease Control and Prevention reported that one in five new COVID-19 cases in the United States was occurring in Florida. Ron DeSantis, Florida's far-right Republican governor, has been receiving a great deal of criticism for his response to the COVID-19 surge; DeSantis has opposed social distancing measures, forbidden public schools from having mask mandates, and tried to score cheap political points with his MAGA base by railing against expert immunologist Dr. Anthony Fauci.

CBS News' Khristopher J. Brooks explains, "In the last week of August, Florida hospitals averaged 279 deaths per day — up from 52 in July, according to the U.S. Department of Health and Human Services. The spike in fatalities, although not yet definitively linked to the coronavirus, is strongly suspected to stem from the ongoing surge in cases caused by the Delta variant. Overall, the state has reported a total over 44,000 coronavirus deaths over the course of the pandemic, according to a New York Times tracker. COVID-19 has claimed so many lives in Florida that funeral directors said there aren't enough hours in the day to schedule all the services, a local TV station reported."

The local television station that Brooks is referring to is WFLA Channel 8, the NBC affiliate in Tampa. WFLA's Melanie Mitchell, on August 25, reported that funeral directors in Tampa are "working around the clock, seven days a week."

One of the funeral directors CBS News interviewed was 48-year-old Richard Prindiville, director of the Highland Funeral Home in Apopka, Florida. Prindiville told CBS News, "There's been days I've come home, and I'm exhausted — and I'm talking to my daughter, and I'm falling asleep as I'm talking to her. Every day is funerals and funerals and funerals."

According to Brooks, Prindiville "routinely works 14-hour days booking funerals, meeting with grieving families, transporting bodies and overseeing services." John Ricco, executive director of the Florida Cemetery, Cremation and Funeral Association, told CBS News that in recent weeks, funeral workers in Florida have been as busy as they were during the height of the COVID-19 pandemic in 2020.

Some funeral homes in Florida, Brooks reports, are running out of space for bodies of people who have died from COVID-19. And funeral homes have so many burials to arrange that they are having to ask the families of the dead to please be patient.

Prindiville told CBS News, "What makes it difficult for us nowadays is just explaining to family members that we cannot have — and we'll have to hold off having — a funeral. In an hour, I could have six death calls, and I'm back to figuring out how to piece stuff together."