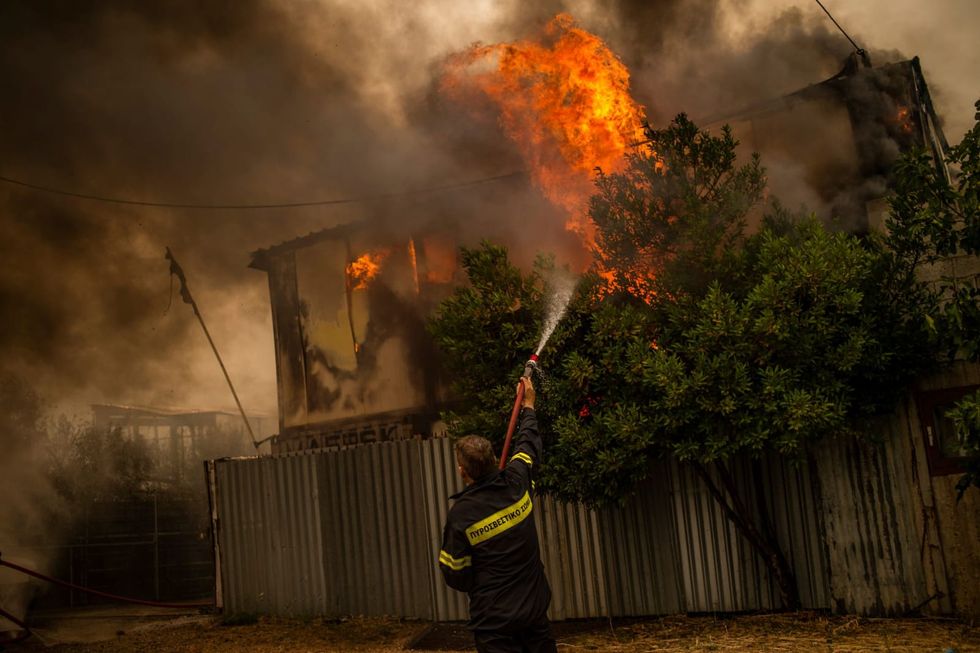 Firefighters try to extinguish a forest fire in a wooded area north of Athens. Since the early hours of the morning, strong westerly winds continued to fuel the spreading of forest fires in Greece. Angelos Tzortzinis/dpa

The wildfires in Greece were still burning out of control on Friday evening, with no all-clear possible on most of the fire fronts.

North of Athens, flames rose high into the night sky again in the evening, including in the village of Varybobi, which was evacuated again after it had already burned four days ago.

Three other large fires blazed for kilometres in the same region, threatening several Athens suburbs, state television reported in the evening, showing images of lines of cars leaving the towns.

Firefighting planes and helicopters had previously tried in vain all day to bring the fires under control despite strong winds. By nightfall, they had to stop operating.

The situation on Euboea was also dangerous. The second largest, heavily forested Greek island was suffocating under a cloud of smoke.

Villages have been evacuated again and again. Among others, about 2,000 inhabitants left the village of Limni in the north-west of the island. They were picked up by ferries in the evening because the land route was cut off by the fire.

On the Peloponnese, there is also no sign of relief. More villages had to be evacuated in the course of Friday afternoon, including the popular tourist resort of Gytheion, a picturesque harbour town near Sparta.

Earlier Friday, Several warehouses and industrial plants along the motorway between Athens and northern Thessaloniki caught fire, leading to many explosions.

The government called on the residents of Malakasa and Sfendali to leave the area in warnings sent by text message.

Members of the security forces moved from house to house to make sure no one had been left behind.

Further evacuations were announced for Oropos, a town further north some 25 kilometres from Athens.

Wildfires throughout Greece that have been raging for days amid unseasonably high temperatures burned more fiercely on Friday, fanned by strong westerly winds.

In the past 24 hours, 86 new forest fires have started burning across the country, the Greek fire brigade tweeted in the morning.

Electricity is increasingly failing in Athens due to the fires. As a precautionary measure, the power company had shut down a large distributor in the affected region on Thursday.

The state-owned network operator said on Friday afternoon that it would temporarily disconnect individual Athenian districts from the power system as planned in order to be able to maintain the overall supply.

At least 18 people were injured and were hospitalized, with most suffering from respiratory problems, Health Minister Vassilis Kikilias told state television on Friday.

A leading medic warned of the dangers of air pollution.

"Do not go out of the house," said Nina Gaga, who heads the pneumology clinic at Athens' Sotiria hospital.

She said regular protective face masks that people are using during the pandemic would not help.

Anyone who goes outside should wear a P95 mask or one with an even higher level of protection, she said.

The nation must now focus on stopping the fires from spreading, Greek news agency ANA reported. Given the strong winds, there is no chance that they can be brought under control for now.

People are banned from going to forests at least until Monday, and any activities that could lead to sparks or flames are also prohibited.

The crews who will arrive or are already in the country include 16 Israeli and 100 Ukrainian firefighters, as well as 82 rescue workers and two firefighting planes from France, according to the Greek Civil Defence.

From Cyprus, there were 40 firefighters and two pilots. Switzerland sent three helicopters to participate in the operations starting from Saturday. Sweden was there with two firefighting planes, as was Romania with 112 firefighters and 23 vehicles.