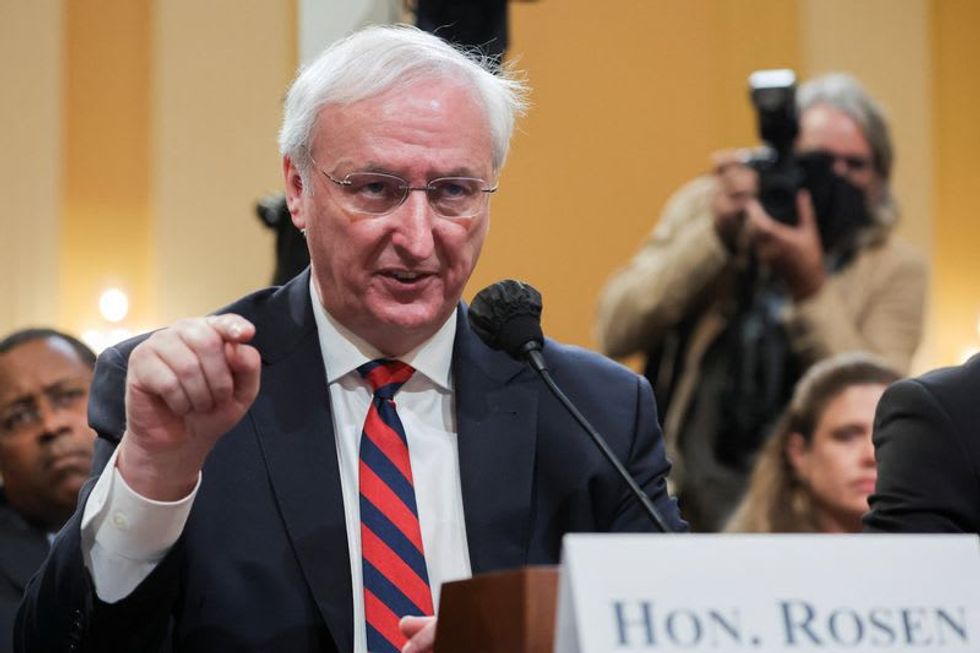 WASHINGTON (Reuters) -The fifth day of congressional hearings on the Jan. 6, 2021, attack on the U.S. Capitol by Donald Trump's supporters heard how the then-president pressured the Justice Department to help him hold onto power after he lost the 2020 election.

Here are takeaways from Thursday's hearing:

Trump was frustrated by what he saw as Justice Department inaction investigating or validating his false claims of election fraud.

Between Dec. 23, 2020, and Jan. 3, 2021, Trump called or met Rosen almost every day as his efforts to hold onto power became more urgent. He wanted Rosen to pursue various avenues, including appointing a special counsel to investigate suspected election fraud.

"The common element of all of this was the president expressing his dissatisfaction with the Justice Department having not done enough to investigate election fraud," Rosen said.

When Rosen told Trump in a Dec. 27 meeting that the Justice Department could not just snap its fingers and change the outcome of the election, Trump quickly responded, "What I'm just asking you to do is just say it was corrupt and leave the rest to me and the Republican congressmen," Donoghue recalled.

A Trump-supporting Justice Department environmental lawyer, Jeffrey Clark, was a key player in Trump's efforts to use the department to aid his efforts to overturn his election loss to Democrat Joe Biden.

Clark met with Trump in the Oval Office several times without the knowledge of White House counsel Pat Cipollone or Justice Department leadership, bypassing the normal chain of command and angering Rosen.

On Jan. 3, 2021, Clark told Rosen that Trump had offered him the position of attorney general and that he was going to accept. Rosen sought an urgent meeting with Trump at the White House, along with Donoghue and Engel, to talk him out of it.

Donoghue testified he told Trump that the entire department leadership would resign within hours if he fired Rosen. Trump turned to Engel and asked him if he would quit too, to which Engel replied that he would and that Clark "would be left leading a graveyard."

The last comment appeared to help sway Trump to back down from his plan, Donoghue said.

Rosen and Donoghue attended a meeting with the president at the White House on New Year's Eve where Trump asked why the Justice Department had not seized voting machines that Trump supporters alleged had been manipulated to steal the election.

Rosen said his department had no legal authority to take that step, a response that did not sit well with Trump, Donoghue recalled.

Rosen told Trump that the Department of Homeland Security had investigated the issue and found nothing wrong with the voting machines.

At the meeting's end, Trump said, "People tell me I should just get rid of both of you."

Donoghue said he told Trump: "Mr. President, you should have the leadership that you want. But understand the United States Justice Department functions on facts, evidence and law. And those are not going to change."

Clark drafted a letter to be sent to state legislatures in some Republican-controlled states, including Georgia, that aimed to sow doubts about Biden's election win.

The letter alleged that the Justice Department had concerns about election results in multiple states. By the time it was written the department had already determined that no widespread fraud had occurred.

Donoghue told the committee he had to read the letter twice to make sure he understood correctly what Clark was proposing "because it was so extreme to me."

Donoghue said Clark was undeterred when he told him the Justice Department could not meddle in the election, responding, "I think a lot of people have meddled in this election"

The letter was never sent after Rosen and Donoghue refused to sign it. Cipollone, the White House counsel, said the letter was so toxic that it should never be seen again because if it was ever made public it would be a "murder-suicide."

Trump pressed Justice Department officials to investigate a baseless internet-based conspiracy theory that an Italian defense contractor had uploaded software to a satellite that switched votes from Trump to Democrat Joe Biden.

Rosen said the conspiracy theory promoted by a former U.S. intelligence officer had been debunked.

Republican congressman Scott Perry texted Trump's chief of staff Mark Meadows to ask him, "Why can't we just work with the Italian government?"

Then-Secretary of Defense Christopher Miller placed a call to the U.S. military attache at the embassy in Italy to seek an investigation, the committee said, citing it as an example of how Trump used the machinery of government to pursue his own personal ends.