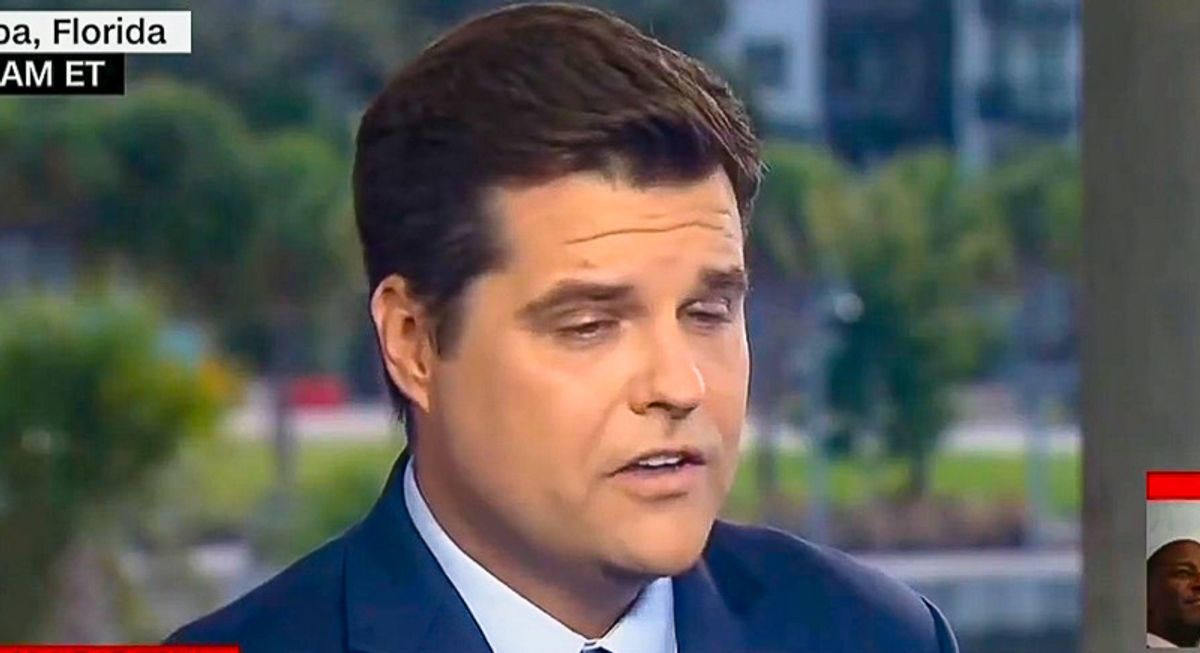 The investigation into Rep. Matt Gaetz (R-Fla.) continues to evolve as federal authorities find more information to expand their case. Over the last several weeks, the case, which began as an investigation into sex trafficking, has expanded to an investigative probe into medical marijuana legislation passed in Florida a few years prior.

According to NBC Connecticut, there are multiple reasons why investigators are zeroing in on Gaetz's longstanding interest in medical marijuana. His connection to two individuals who benefited greatly from Florida's passing of medical marijuana raises ethical concerns and questions about the possibility of conflicts of interest.

The publication reports that Gaetz, Dr. Jason Pirozzolo, and Halsey Beshears have quite a few common interests between the three of them but the most significant is the Sunshine State's $1.2 billion medical marijuana industry. Now, his case, which focused on allegations of sex trafficking a minor, has shifted to one that focuses on "a larger review of public corruption."

What began as a probe into sex trafficking and whether Gaetz paid women and an underage girl in exchange for sex has grown into a larger review of public corruption, according to people familiar with the investigation.

Individuals with knowledge of the investigation have revealed investigators are "looking at whether Gaetz and his associates tried to secure government jobs for some of the women."

Investigators are also said to be looking into "scrutinizing Gaetz's connections to the medical marijuana sector, including whether Pirozzolo and others sought to influence legislation Gaetz sponsored. The probe includes legislation from 2018, when Gaetz was in Congress, and earlier work in the state legislature."

With Florida's distinct legislation in place to govern its medical marijuana industry, the state only allowed a "limited the pool of applicants to nurseries that had been in continuous business for 30 years and had an inventory of 400,000 or more plants." The pool of applicants included the Beshears family.

The Tampa Bay Times reported in 2014 that Beshears had failed to file a conflict of interest report when he voted on the bill, and the lawmaker who sponsored the amendment wanted to "err on the side of limiting who could qualify now" when embarking on such a new industry. More licenses have since been awarded, but the industry is still tightly controlled.

Amid Florida's continued expansion of marijuana, many measures were incorporated that appear to align with Gaetz, Pirozzolo, and Beshears' interests. However, Gaetz continues to deny any wrongdoing in connection with the allegations he is facing.