‘How theocracies are born’: Experts warn of ‘Trump’s Jesus fascists’ after report on Christian GOP churches 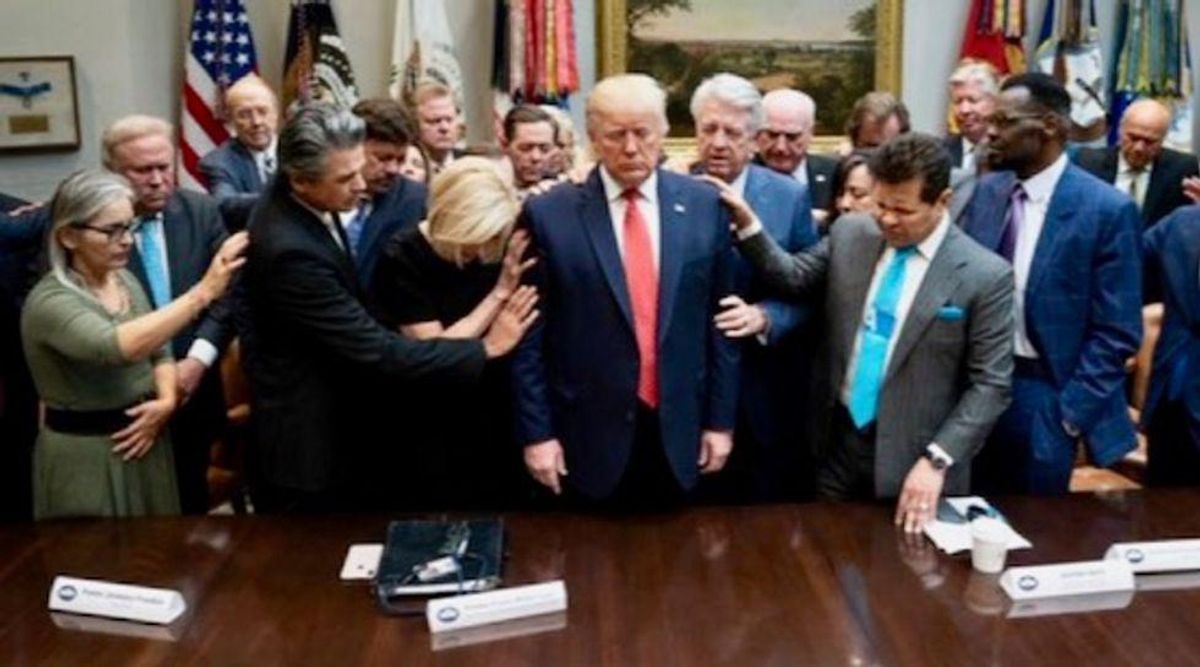 Experts, journalists, and chroniclers of religious extremism are sounding alarm bells over a Washington Post exposé on "a growing Christian movement that is nondenominational, openly political and has become an engine of former president Donald Trump's Republican Party."

As The Post explains, "It is a world in which demons are real, miracles are real, and the ultimate mission is not just transforming individual lives but also turning civilization itself into their version of God's Kingdom: one with two genders, no abortion, a free-market economy, Bible-based education, church-based social programs and laws such as the ones curtailing LGBTQ rights now moving through statehouses around the country."

In short, one could say, an American theocracy. Or worse, something that looks a bit like a scene from Margaret Atwood's dystopian work, The Handmaid's Tale.

"This is the world of Trump's spiritual adviser Paula White," The Post explains, "and many more lesser-known but influential religious leaders who prophesied that Trump would win the election and helped organize nationwide prayer rallies in the days before the Jan. 6 insurrection, speaking of an imminent 'heavenly strike' and 'a Christian populist uprising,' leading many who stormed the Capitol to believe they were taking back the country for God."

Some may say it's easy to dismiss them as crazies or radicals or extremists, but not when you see how many Americans are involved in some sort of far right wing religious cults – and that's not even including the QAnon cult and its offshoots that claim Donald Trump is saving the world from, as a Guardian columnist wrote, "national Democrats, aided by Hollywood and a group of 'global elites,' [who] are running a massive ring devoted to the abduction, trafficking, torture, sexual abuse and cannibalization of children, all with the purpose of fulfilling the rituals of their Satanic faith."

The Post says this new Christian movement "includes some of the largest congregations in the nation, housed in the husks of old Baptist churches, former big-box stores and sprawling multimillion-dollar buildings with private security to direct traffic on Sundays. Its most successful leaders are considered apostles and prophets, including some with followings in the hundreds of thousands, publishing empires, TV shows, vast prayer networks, podcasts, spiritual academies, and branding in the form of T-shirts, bumper stickers and even flags."

And they have ordained Trump as "God's chosen leader."

The Post piece focuses on a Texas megachurch called Mercy Culture. Their two-year anniversary video at one point appears to show them in a Fort Worth public school.

Meanwhile, experts are speaking out in response to the Post's report.

"This is how theocracies are born" declares Anne Applebaum, author of Twilight of Democracy: The Seductive Lure of Authoritarianism. Applebaum is also a senior fellow at Johns Hopkins School of Advanced International Studies and a staff writer at The Atlantic.

"Dominionism is a real threat to America and I wished more people, especially Christians, speak up!" says Steven A. Hassan, PhD, MA, M.Ed., LMHC, NCC, whose bio says he is "one of the foremost authorities on cults and mind control." He is the author of The Cult of Trump.

"This is the backbone of Trump's Jesus fascists," warns New York Times best selling author Frank Schaeffer, a well-known guest on cable news who writes about the Christian far right. "PAY attention! Nondenominational congregations have surged from being virtually nonexistent in the 1980s to accounting for roughly 1 in 10 Americans in 2020."

"I'm struck by this religious group's appropriation of the word 'mercy' as a tag for its crusade to gain theocratic control over the rest of us — with eminently unmerciful plans for LGBTQ people," says William D. Lindsey, a theologian who writes on the interplay of belief and culture. "We've entered an Orwellian topsy-turvy world when those pushing 'mercy' are the least merciful of all to targeted minority communities."

Veteran journalist, author, and SiriusXM Progress host Michelangelo Signorile, sums it all up by calling it "truly sick."