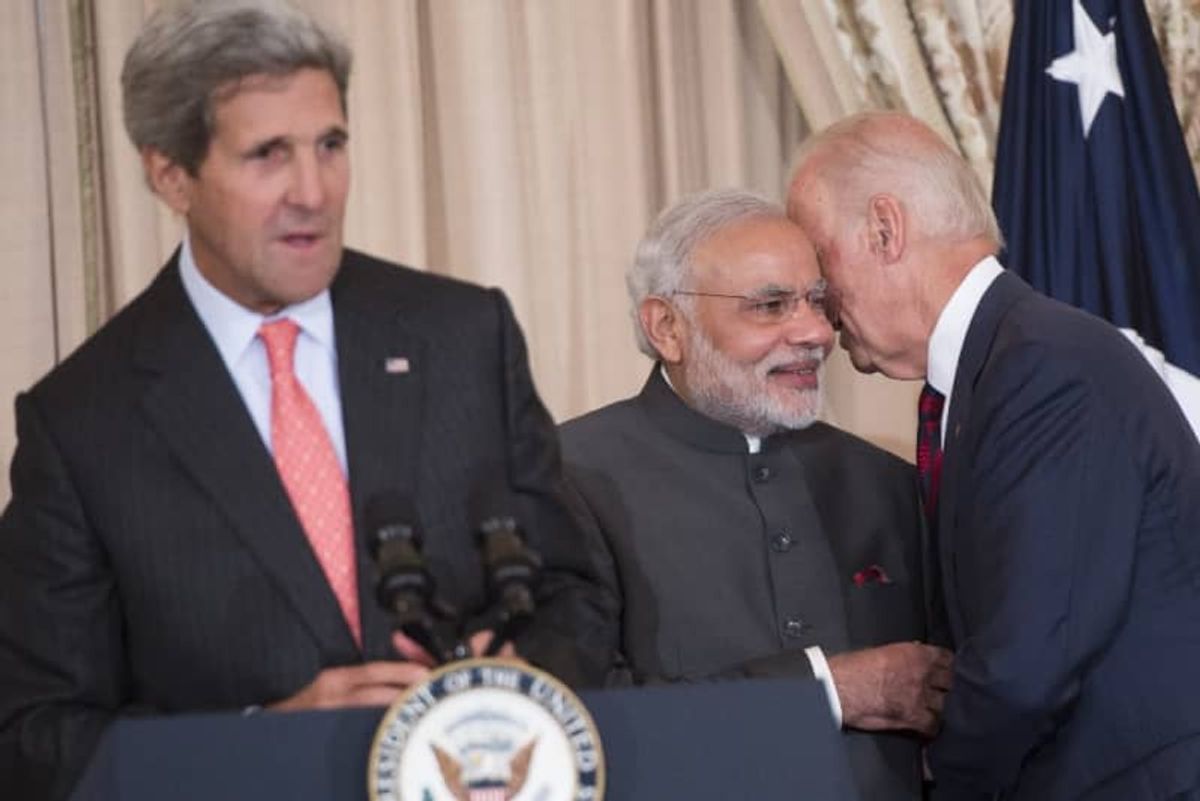 US President Joe Biden, then the vice president, huddles in 2014 with Indian Prime Minister Narendra Modi alongside John Kerry, then the US secretary of state

Washington (AFP) - US President Joe Biden will hold first-ever joint talks Friday with the leaders of Australia, India and Japan, boosting an emerging four-way alliance often cast as a bulwark against China.

It will be one of the first summits, albeit in virtual format, for Biden, who has vowed to revive US alliances in the wake of the disarray of Donald Trump's administration.

"That President Biden has made this one of his earliest multilateral engagements speaks to the importance that we place on close cooperation with our allies and partners in the Indo-Pacific," White House press secretary Jen Psaki told reporters Tuesday.

The meeting of the so-called "Quad" comes amid rising tensions with China, which is seen as flexing its muscle both in trade and security realms.

Australian Prime Minister Scott Morrison said that Biden was "taking this to another level."

"It will be an historic moment in our region and it sends a strong message to the region about our support for a sovereign, independent Indo-Pacific," Morrison told reporters.

Both Psaki and India, which earlier announced the participation of Prime Minister Narendra Modi, said that the talks would take up climate change and the Covid-19 pandemic -- two key priorities for Biden.

"The leaders will discuss regional and global issues of shared interest, and exchange views on practical areas of cooperation towards maintaining a free, open and inclusive Indo-Pacific region," the Indian foreign ministry said in a statement.

Japan said that Suga spoke separately Thursday to Modi and voiced alarm about China's "unilateral attempts to change the status quo in the East and South China Sea" as well as the status of rights in Xinjiang and Hong Kong.

State Department spokesman Ned Price told reporters that the Quad was well-equipped to deal with the world's "urgent challenges" but, asked about China, said, the format is "not about any single competitor."

The summit follows talks on February 18 among the foreign ministers of the Quad when they pressed jointly for a restoration of democracy in Myanmar after the military ousted democratic leader Aung San Suu Kyi on February 1.

US officials cast the meeting as a key way of exerting pressure as India and Japan enjoy closer relationships with Myanmar's military -- which has historically counted on China as its main source of support.

The Quad foreign ministers, however, were careful not to make an explicit mention of China, which has voiced alarm at what it sees as an effort to gang up on its interests in Asia.

After Biden's election, Chinese state media had printed articles calling on India to end the Quad, seeing New Delhi as the most likely opponent.

But views have hardened in India after a pitched battle in the Himalayas last year killed at least 20 Indian troops. China has named four dead in confirmation that took half a year.

Australia has also shown growing willingness to participate in the Quad as relations deteriorate with Beijing, last year joining naval exercises with the three other nations off India's shores.

The Quad was launched in 2007 by Japan's then prime minister Shinzo Abe, who was alarmed at China's growing assertiveness around Asia.

Biden has pledged in general terms to continue his predecessor's hawkish line on China, including by pressing on human rights and territorial disputes.

But the Biden administration has promised what it considers a more productive approach that includes boosting ties with allies and finding limited areas for cooperation with Beijing such as climate change.