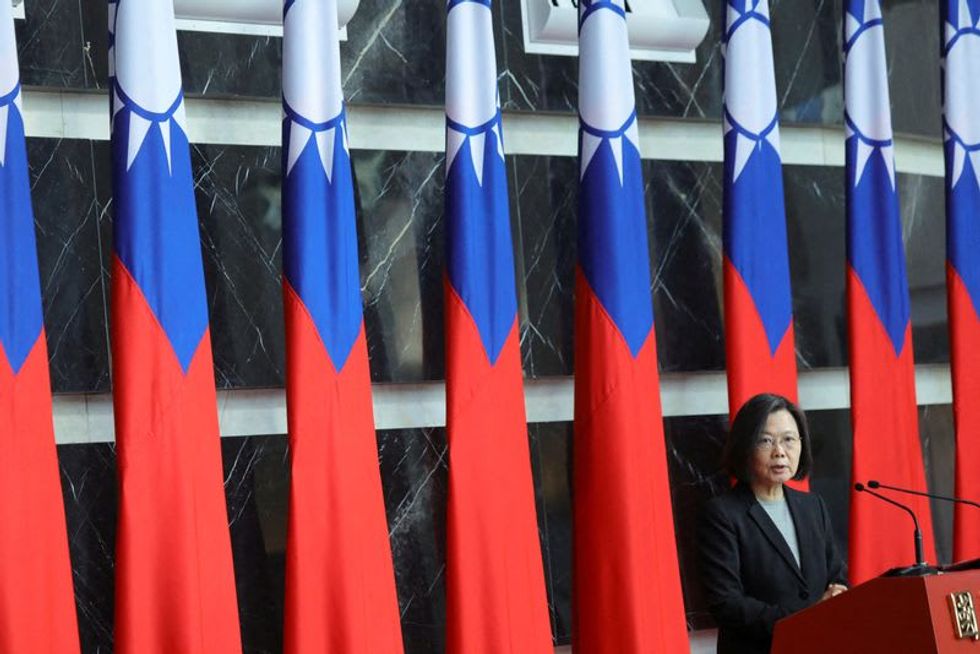 TAIPEI(Reuters) - Taiwan President Tsai Ing-wen marked the new year with a message for China: military conflict is not the answer.

"We must remind the Beijing authorities to not misjudge the situation and to prevent the internal expansion of 'military adventurism'," Tsai said on Saturday in her New Year's speech broadcast live on Facebook.

China claims democratically governed Taiwan as its own territory and has increased military and diplomatic pressure in the past two years to assert its sovereignty claims.

In Chinese President Xi Jinping's New Year address the day before, he said the complete unification of "the motherland" was an aspiration shared by people on both sides of the Taiwan Strait.

Taiwan says it is an independent country and has repeatedly vowed to defend its freedom and democracy.

"The military is definitely not an option for solving cross-strait disagreements. Military conflicts would impact economic stability," Tsai said. "Our two sides jointly shoulder the responsibility of maintaining regional peace and stability."

Taiwan's stance has always been "to not succumb when facing pressure and to not rashly advance when receiving support," Tsai said.

To ease tension in the region, both Taipei and Beijing must "work hard to take care of people's livelihoods and calm the hearts of the people" in order to find peaceful solutions to problems together, Tsai said.

Tsai also said Taiwan would continue to monitor the situation in Hong Kong, adding that interference in the recent legislative election and the arrests this week of senior staff at the pro-democracy media outlet Stand News "made people worry even more about human rights and freedom of speech in Hong Kong."

Steady governance is Taiwan's most important goal in 2022, Tsai said.

"We will hold fast to our sovereignty, uphold the values of freedom and democracy, defend territorial sovereignty and national security, and maintain peace and stability in the Indo-Pacific region."