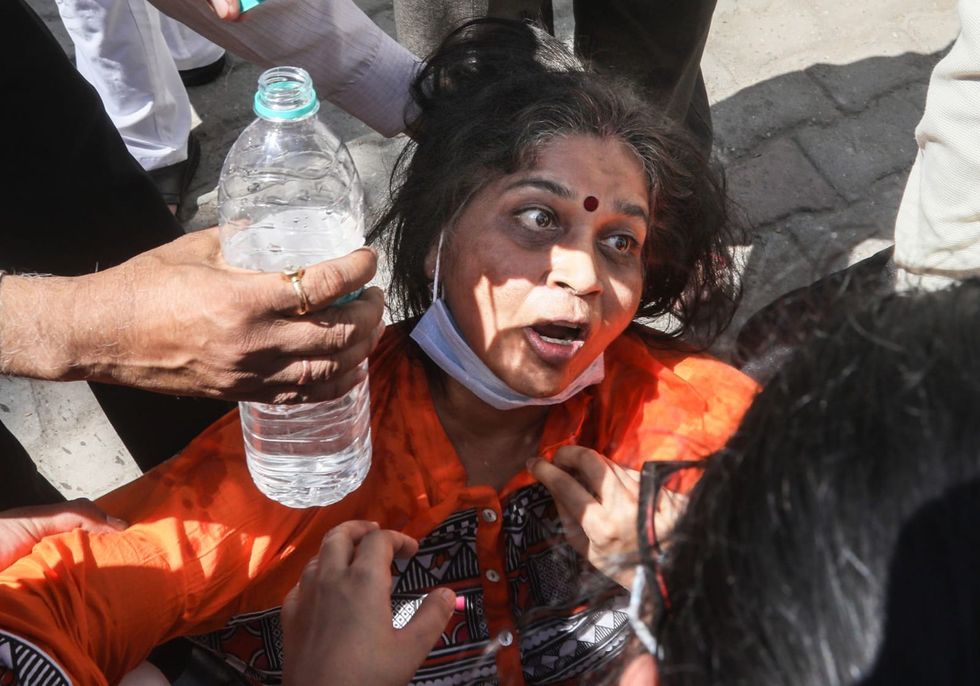 Coronavirus outbreak in New Delhi - A woman mourns at Jaipur Golden hospital, where at least 25 Covid-19 patient passed away the previous night due to shortage of medical oxygen. - Naveen Sharma/SOPA Images via ZUMA Wire/dpa

India registered 349,691 fresh coronavirus cases on Sunday, a new global record for infections on a single day, with the pandemic pushing the healthcare system to the brink and hospitals reporting deaths due to a shortage of medical oxygen.

Covid-19 claimed 2,767 lives in the past 24 hours making it the deadliest day since the pandemic began, data from India's federal health ministry showed. Overall, 192,311 people have died of the disease in India.

This is the fourth consecutive day that India recorded over 300,000 cases and over 2,000 deaths.

The healthcare systems are overwhelmed and people are struggling to get hospital beds, anti-viral drugs and other essentials, and their appeals have flooded social media.

Many hospitals in the capital New Delhi like Pentamed Hospital are repeatedly sending out SOS messages over medical oxygen shortages, with the situation showing no signs of improvement even after the government took a series of measures to increase supplies.

Indian media reported on Saturday that 25 people had died at the Jaipur Golden hospital due to low oxygen pressure. Another 12 patients died in similar circumstances in Punjab and Madhya Pradesh state.

India has been airlifting emergency oxygen tanks as it fights the second wave that Prime Minister Narendra Modi on Sunday described as a “storm that has shaken the nation.”

The Indian Air Force on Saturday flew four oxygen containers from Singapore. India is also expected to start importing equipment for oxygen production and supply from countries like Germany and the United Arab Emirates.

Amid the huge demand for oxygen due to the rising numbers of seriously ill people, Modi said over 550 medical oxygen generation plants will be set up in public health facilities to boost the availability of the gas.

New Delhi, the worst-hit by the pandemic among Indian cities, extended its lockdown by another week till next Monday with chief minister Arvind Kejriwal saying the pandemic “continues to wreak havoc in the city.”

The erratic supply of oxygen has led to a traumatic time for both relatives of patients and hospital staff.

“Why can't the government fix this problem? The deaths may be mere numbers for some but the end of the world for the families,” Ravi Prakash, whose mother is at Delhi's Saroj Speciality Hospital, told the Times of India daily.

The Fortis Escorts Heart Institute, a private hospital in Delhi, said it would not admit any more patients due to oxygen shortages, after which the Delhi government said it was working to provide emergency supplies.

“The state healthcare system has crumbled and people are in a bad situation. We are administering oxygen to patients free of charge for the past three days. The crowds just don't end," Gurpreet Singh of the Khalsa Help International non-profit told reporters in Delhi's suburb of Indirapuram.

Major cities including India’s financial centre Mumbai and the IT hub of Bengaluru, currently recording its biggest surge in cases, have been especially hit hard.

Scientists from the Indian Institute of Technology told local media that the second wave of the pandemic may peak between May 11-15 and decline steeply by the end of May.

India, which has logged 16.9 million cases, is the worst-affected country worldwide after the United States.

Several nations including Britain and France have expressed support as Covid-19 cases soar in India. It also got an offer of medical supplies from its arch-rival Pakistan, following a recent thaw in ties between the nuclear-armed neighbours.

Experts attribute the rapid spread of cases to people’s failure to observe safety measures, lack of preparedness by the government as well as the presence of more infectious variants of the virus.