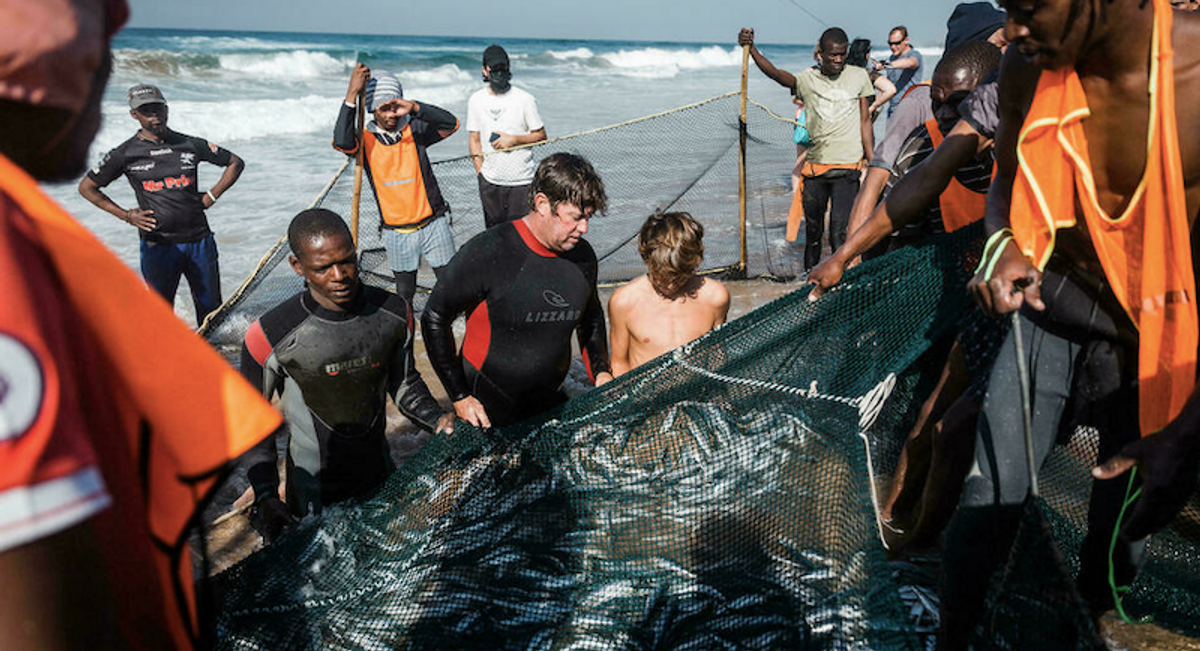 Dolphins gracefully pop in and out of the water, peppering the infinite-looking Indian Ocean, sharks rise from the depths while birds dive from the sky -- all on the hunt for their next meal: sardines.

In the crisp air of winter, South Africa's east coast is home to a spectacular annual migration of millions of sardines.

It attracts a host of marine predators, and the result is an awesome feeding frenzy.

"This is a super-pod of common dolphins," Michelle Carpenter, marine biologist excitedly tells AFP, while perched on the side of a boat as three dolphins synchronise into a perfectly timed dive right behind her.

As the ripples of foamy waters roll through, a flurry of Cape gannets tuck in their wings in succession, diving from the clear blue skies like arrows into the ominous dark waves.

A shape-shifting silvery ball of sardines grouped together glides through the water in unison just below the waves -- a "bait ball".

Separated from the main shoal, which can be several kilometres (miles) long, they are surrounded and then herded up from the deep sea to the surface by the dolphins.

The feast can now begin.

This choreographed dance of nature is possible because of the symbiotic relationship between the different predators.

"Sardines are always looking for depth, for protection... so they try to go down deep. And that's where the sharks come in," said professional diver Gary Snodgrass.

"So you have the sharks at the bottom, you have the dolphins around the edges... basically stopping the sardines from running away," Snodgrass said, pointing to the hyperactive mammals.

Then the most menacing guest arrives, the dusky shark, stealthily weaving into the banquet with its famous fear-inducing pointed fin.

In the water, wetsuit-clad spectators anxiously keep their distance, watching the feeding frenzy as the sardines frantically try to escape.

But within minutes, their shoal is decimated.

The dining ends, and the guests take their leave.

Their binge will be repeated over and over during the next three to four months of the migration -- until the sardines disappear back into the open ocean.

The reason behind the "sardine run" is not exactly known, but scientists believe it is linked to their reproductive cycle.

Those who saw the feast from under the waves will take back indelible memories.

"Amazing," said French diver Laurent, who did not give his surname.

"Shark! Cherry on the cake... Incredible. The shark didn't bite us... best time ever", he said gleefully alongside his friend Jeremie, who admitted to being "a bit afraid".

As calm returns to the sea's surface, a silvery constellation of fish scales trickles like stardust into the deep.

US economy reaches pre-pandemic size, but not as quickly as expected

The US economy returned to its pre-pandemic level in the second quarter, data released Thursday showed, giving President Joe Biden a political win as Congress moves closer to passing a long-debated plan to improve the country's infrastructure.

However the 6.5 percent annualized rate of expansion in the April-to-June period was slower than expected, and the Commerce Department report confirmed that inflation spiked as customers vaccinated against Covid-19 returned to businesses that suffered throughout the pandemic last year.