Is America now on the verge of re-fighting the American Revolution? 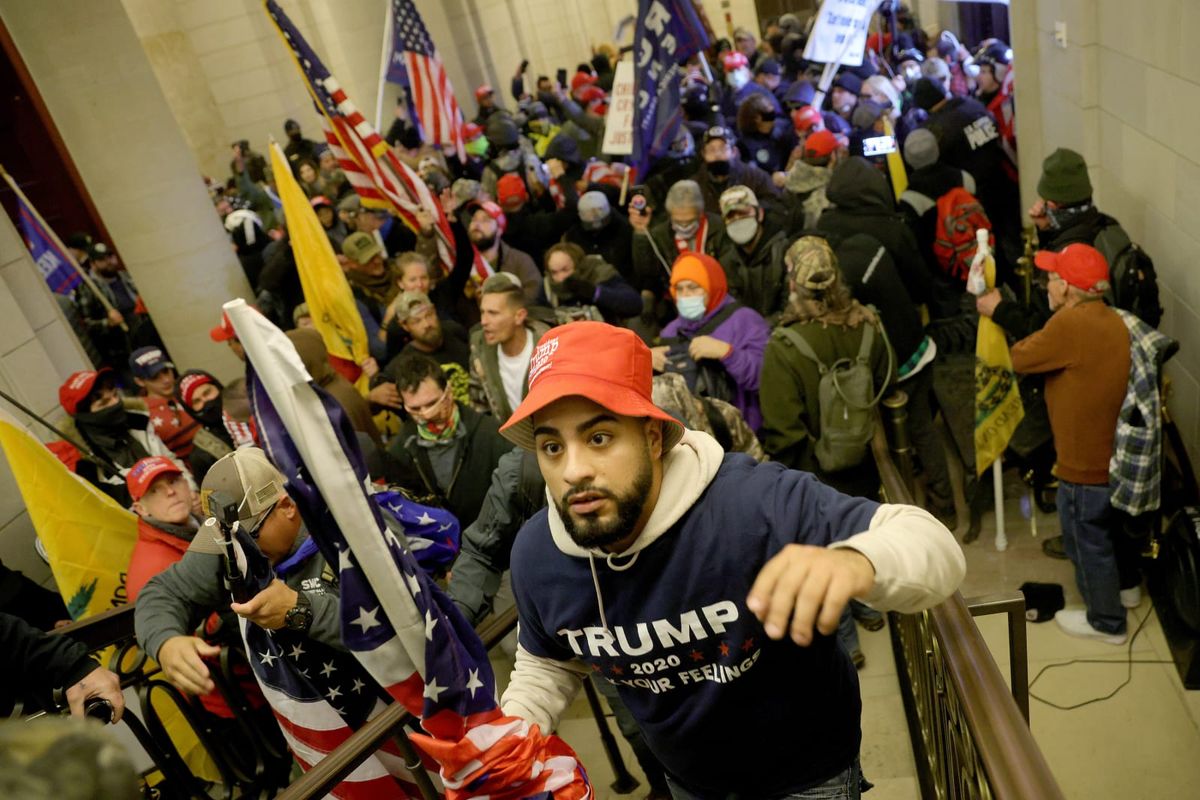 Former Republican Presidential candidate Mitt Romney being booed in his own home state raise an urgent question: Are the Redcoats back?

The Republican party has now introduced over 300 pieces of legislation designed to make it more difficult for American citizens to participate in the process of selecting their representatives, the core function of a democratic republic.

They've also proposed or passed numerous laws criminalizing protest and dissent, primary American values written into the First Amendment, and given a "get out of jail free" card to people who kill protesters.

Today's Republican party does not believe in democracy or the core idea on which this nation was founded:

"That all men are created equal, that they are endowed by their Creator with certain unalienable rights" and "that to secure these rights, Governments are instituted among Men, deriving their just powers from the consent of the governed…"

As we see with their support of Trump's Big Lie, they have a serious problem with that "consent of the governed" part of the Declaration of Independence. And they're pretty sketchy about that whole human "rights" thing.

If it seems like America is re-fighting the Revolutionary War or the Civil War, it's because there's a sizeable group of rightwing Americans who say that's what they think they're doing.

In both of those past wars, one group of Americans believed in the ideal of democracy and a republic deriving its authority from the will and consent of its people. On the other side, there were people who believed that democracy was a dangerous experiment and a grave mistake.

During the Revolutionary War the anti-democracy folks were called Tories or Loyalists, because they were loyal to the British king and believed that the best form of government was a kingdom, and that letting average people participate in democratic governance would lead to disaster.

That was solidly a third, perhaps even half, of the white people then living in North America: they were willing to fight and die to keep America part of the United Kingdom.

Those who opposed democracy on this continent had a lot of history on their side.

For most of the 7,000 years of recorded human history at that point, governments had been run either by kings who seized power through violence, or priestly theocrats who claimed that their authority to rule came from God. (In most cases, regardless of who ended up on top, there was an unholy alliance between the two.)

The British United Kingdom was just the latest, in 1776, in a long series of kingdoms that ruled every part of Europe; the Greek experiment with democracy was 3000 years old at that time, and the Roman experiment with a republican form of government had failed almost 2000 years earlier.

There were a lot of reasons back then to think that a democratic republic would be a terrible mistake.

The main one was that it hadn't worked in thousands of years, and the ancient Greek and Roman experiments were considered by many — most, actually — to have been failed experiments.

People believed so strongly either in the Loyalist necessity of a royal family, or the Founders' hope of a people engaged in self-rule, that families were literally torn apart, brother killing brother, neighbors turning firearms against each other.

By the time of the Civil War, 80 years later, there was still a debate about whether democracy was anything more than some kind of liberal, airy-fairy idea that really didn't work out all that well.

But this time, those Americans who took up arms against democracy were not fighting on behalf of a church or a king. They were fighting to support the rich, the oligarchs of the deep South.

As I lay out in detail in my new book The Hidden History of American Oligarchy, between 1820 and 1860 the South underwent a radical consolidation of wealth and property.

The invention of the Cotton Gin and its adoption in the early 1820s allowed the few plantations wealthy enough to buy one to effectively wipe out their smaller competitors and buy up their land.

As a result, by 1860 virtually all of the most productive land, wealth and political power of the South was consolidated in the hands of just a few thousand families.

They did not believe in democracy either; they declared war on America specifically to end democracy and establish a continent-wide oligarchy: rule by the rich in an oligarchic police state as the South had become.

The North won and democracy prevailed, but the idea of oligarchy survived and has been persistent throughout American history.

This is what the Republican party now represents: Oligarchy.

Rule by the rich and ignoring "the consent of the governed."

The suppression of dissent, the oppression of minorities, and replacing the ballot box with the iron fist of a police state run of, by and for the wealthy few.

And they're pushing us there really hard and really fast:

A political network run by a group of right-wing billionaires has a larger budget and more employees than the entire Republican party.

A family of billionaire oligarchs from Australia crank democracy-hating propaganda into the American political bloodstream nearly every day on cable television and in print.

Voices openly denigrating democracy and promoting hate and intolerance — the hallmarks of oligarchy — are on local radio and television in every American city every single day, and dominate the Internet.

The single largest source of threats and murders by terrorists in America are today committed by white-supremacist right-wingers who hate and fear the idea of a pluralistic, democratic society.

Several of these hard-right groups have openly declared their intention to start a second American Civil War.

They say they want to see Americans killing each other in the name of white supremacy and rule by the rich, and some have followed their suggestion.

They declare their loyalty to a white-supremacist real estate oligarch from New York, get their news from Australian and Ukrainian oligarchs, and have embraced an ideology championed by Germans in the 1930s.

They even adorn themselves in red and wear funny hats like the British loyalists did in revolutionary times.

The Biden presidency represents America's third, and perhaps final, chance to prove democracy is not merely an idealistic fantasy.

If his administration and the Democrats in Congress can succeed in conquering the coronavirus, putting the American economy back on track, and rebuilding the civil society that 40 years of Reaganism has so devastated, American democracy — and, indeed, democracy around the world — may well endure and even grow.

But Republicans are doing everything they can to keep that from happening, from discouraging vaccination and public health measures, to sabotaging our election systems, to amplifying their rhetoric of hate and terror across multiple media platforms.

When "moderate" voices within their ranks, like Mitt Romney and Liz Cheney, dare pop their heads up, the majority of the Republican Party viciously attacks them.

Dissent is no longer allowed in the GOP.

Oligarchy has completely seized the party.

These, as Thomas Paine (a fervent believer in democracy) said, "are the times that try men's souls."

Long before actual conflict broke out, Paine wrote: "The summer soldier and the sunshine patriot will, in this crisis, shrink from the service of their country; but he that stands by it now, deserves the love and thanks of man and woman. Tyranny, like hell, is not easily conquered…"

We must not let the right-wing Redcoat/Redhat terrorists, who have openly proclaimed their goal of Americans killing Americans in an ideological and racial war, prevail.