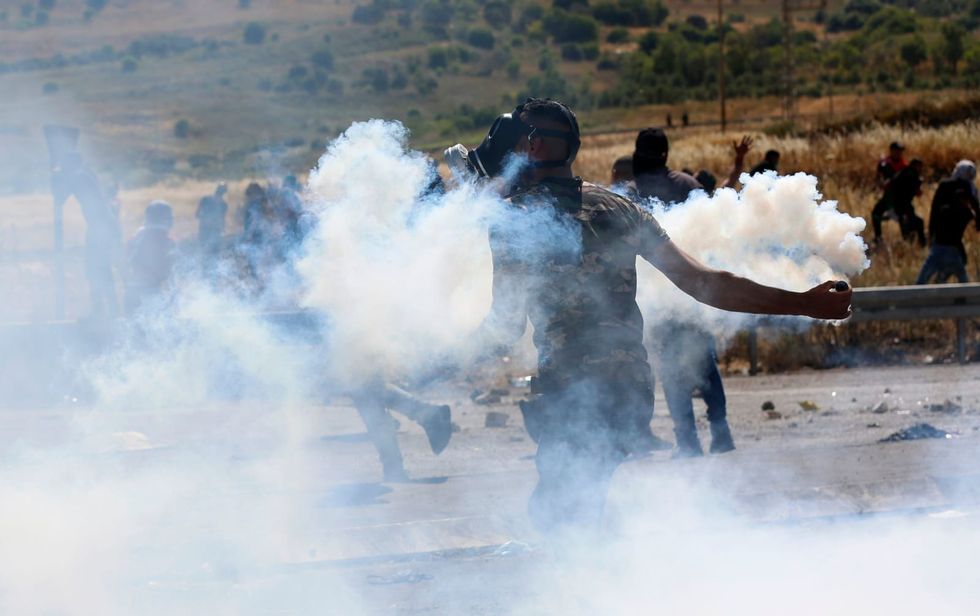 Clashes in West Bank - A Palestinian protester throws back a tear gas canister at Israeli soldiers during clashes in the West Bank city of Nablus, at a protest in solidarity with Gaza strip and jerusalem amid the escalating flare-up of Israeli-Palestinian violence. - Shadi Jarar'ah/APA Images via ZUMA Wire/dpa

Eight people have died so far in Israel after more than 2,000 rockets fired from Palestinian militants in Gaza sent people running for cover in communities across the Jewish State.

The losses were far higher in Gaza. Days of Israeli airstrikes and artillery shelling has led to the deaths of more than 120 people - including 31 children - with over 900 others injured, Palestinian officials said.

Violence erupted in multiple places on Friday, including the West Bank, where the Palestinian Health Ministry said eight people died and some 50 others were injured by bullets and rubber projectiles fired by Israeli forces.

Earlier, the Israeli army said it shot and killed an attacker who tried to stab a soldier with a knife near a military post in Ofra, near Ramallah in the West Bank.

The civil unrest was mounting between Arab and Jewish citizens of Israel, with other protests and riots reported in communities in which a high proportion of Arab Israelis live.

On Friday night in East Jerusalem, there were incidents across Israel of police arrested protesters who were throwing stones and incendiary devices.

Citizens have been facing off for days in the city of Lod, which remains under curfew after becoming a flashpoint for some of the ugliest confrontations.

The pro-Iran Hezbollah movement said one its members, a 21-year-old, died in hospital in southern Lebanon after being hit in the stomach.

Meanwhile, in Beirut, hundreds of pro-Iranian Hezbollah followers along with Palestinians demonstrated in the Burj al-Barajneh area in the southern suburbs of Beirut.

In Jordan, demonstrators travelled to the border with Israel to protest.

Elsewhere, three rockets were fired from Syria in the direction of Israel on Friday evening, with one of them landing on Syrian soil, according to the Israel Defense Forces.

In Gaza, the Israeli army said "many kilometres" of a tunnel system used by militants were damaged in a major assault that began overnight.

"I said we would hit Hamas and the other terrorist organizations very hard - and that is exactly what we are doing," Prime Minister Benjamin Netanyahu said, according to remarks released by his office.

The tunnel network is vital in the Gaza Strip for shifting goods and people in and out, since Israel maintains tight restrictions on the region so long as it is ruled by Hamas, a group Israel classifies as terrorist and which has a history of armed resistance to Israeli rule.

The United Nations sounded alarm about the humanitarian situation in the Gaza Strip, calling for the border to be opened to transport petrol and humanitarian goods.

According to UN estimates, some 10,000 Palestinians have had to leave their homes in Gaza because of the ongoing fighting.

International efforts to mediate in the conflict have proven futile so far.

An Egyptian delegation that met with Israeli officials to help negotiate a ceasefire did not reach any positive results, an Egyptian security source said on Friday.

However, the US embassy in Jerusalem said Hady Amr, the deputy assistant secretary of state for Israel and Palestinian affairs, had arrived in Tel Aviv Friday evening to lead the Biden administration's efforts at to end the fighting.

He is set to meet with Israeli and Palestinian officials in the coming days.

Amr will "reinforce the need to work toward a sustainable calm, recognizing Israel's right to self-defense," the embassy tweeted.