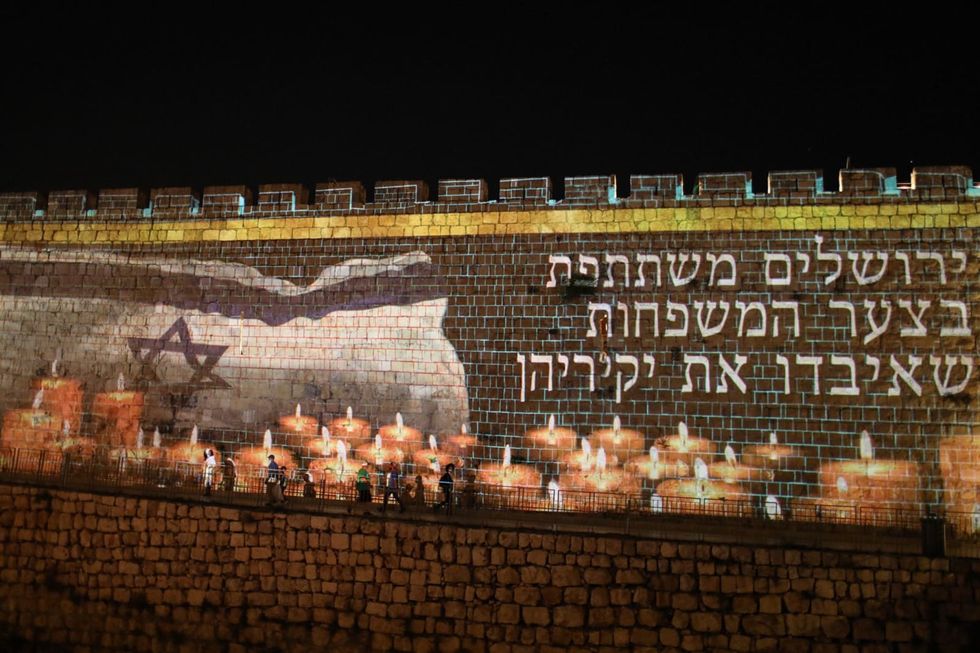 Jewish religious pilgrimage memorial in Jerusalem - A condolence message and candles for the victims of a stampede during a Jewish Ultra Orthodox mass pilgrimage to Mount Meron commemorating the holiday of Lag Ba'Omer is projected on a wall of Jerusalem's Old City. - Ilia Yefimovich/dpa

Israel held a day of national mourning on Sunday to remember the 45 people who died in a stampede at a religious festival drawing tens of thousands of ultra-Orthodox Jews two days ago.

Flags were lowered to half-staff at public buildings and military bases across the country, and sporting events have been cancelled.

A special parliamentary session is scheduled on Monday to commemorate the victims of the incident, which has been described at the worst civilian disaster in Israeli history, by lighting memorial candles.

Pope Francis also remembered the victims on Sunday and prayed for them with a crowd of several thousand gathered at St Peter's Square.

He was the latest voice from abroad to express condolences about the tragedy, preceded by US President Joe Biden, the German government, Turkey and EU foreign affairs chief Josep Borrell, among others.

A mass panic broke out on Thursday night during a religious festival attended by some 100,000 people at Mount Meron in northern Israel to mark Lag Baomer. Forty-five strictly religious men and boys were killed in the resulting crush, and some 150 people were injured.

Among the victims were two pairs of brothers, aged 12 and 14, and aged 12 and 18, as well as US, Canadian and Argentinian nationals.

The incident also led to calls for the responsible authorities to resign. Police Minister Amir Ochana wrote on Facebook that he would go before the cameras after all victims were identified and buried.

"I am responsible - but responsibility does not mean guilt," he said, adding that he was ready for any investigation into the incident.

Reports suggest the stampede began when people started to slide on a sloping ramp with a metal floor and corrugated metal partitions on both sides, causing the densely packed revellers to fall over each other. Earlier reports said a stand had collapsed at the gathering.

Witnesses have accused police of allowing people into a cordoned-off area even though it was already extremely crowded and not opening the exits on either side quickly enough after people started panicking.