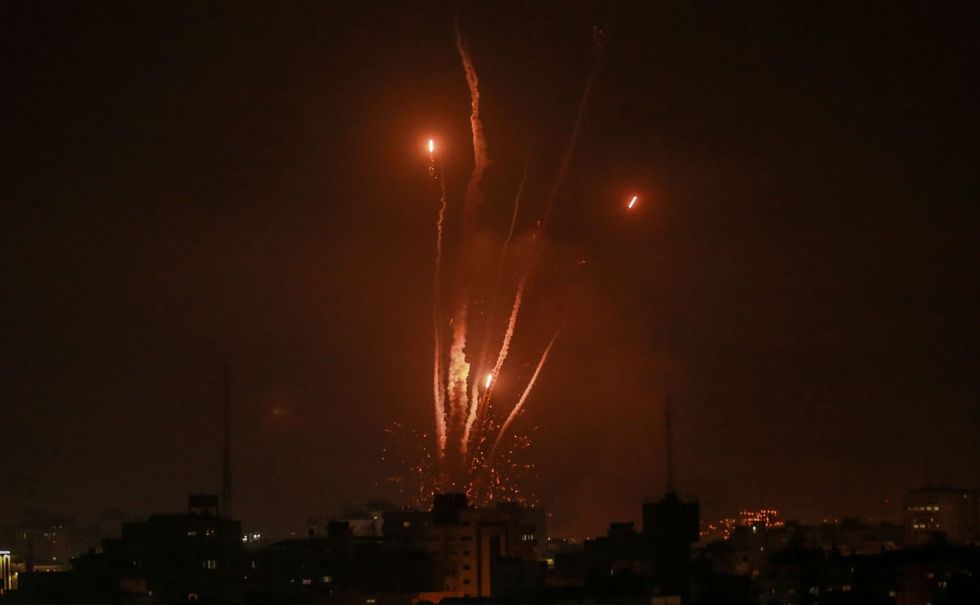 Tensions simmering in Jerusalem in recent days took a deadly turn on Monday as militants in the Gaza Strip and Israel exchanged attacks, with 20 people killed, according to officials.

The Palestinian Health Ministry said nine children were among the 20 killed and more than 65 people were injured.

It was initially unclear in what circumstances the people died.

The Israeli army wrote on Twitter that it had targeted and killed three Hamas activists in an airstrike.

Israel was conducting airstrikes on the coastal enclave in response to a barrage of rockets fired towards southern Israel as well as Bet Shemesh, near Jerusalem, and Jerusalem itself.

The last time a rocket alert sounded in the city was in summer 2014, said an army spokesman.

Meanwhile, the Israeli military said more than 150 rockets were fired by militant Palestinian groups from the Gaza Strip towards Israel on Monday. Dozens were intercepted by Israel's Iron Dome defence system.

"This evening, on Jerusalem Day, the terrorist organizations in Gaza have crossed a red line and attacked us with missiles in the outskirts of Jerusalem," he said.

Violent clashes between Israeli security forces and protesters in the area around what is known as the Temple Mount to Jews and the Noble Sanctuary to Muslims in Jerusalem have broken out in recent days.

The Islamist Hamas movement had issued an ultimatum telling Israel to withdraw settlers and police from the holy site and from the neighbourhood of Sheikh Jarrah in Jerusalem by Monday night. Shortly after it ended, reports of mass rocket attacks began.

A Hamas spokesman said the rockets were a "message" to Israel and a "response to its crimes and aggressions against the holy city."

The Islamic Jihad group in Gaza has also claimed responsibility.

An Israeli army spokesman said several Palestinian organizations had been involved in the attacks, but Hamas is the one to be blamed. He added that it was Israel's intention to deal Hamas a heavy blow.

The situation in the West Bank and in the Arab-dominated eastern part of Jerusalem has been tense since the beginning of the fasting month of Ramadan, which is set to end later this week.

Many Palestinians are angry because Israeli police had cordoned off areas of the Old City to prevent gatherings, and some Palestinian families in the Sheikh Jarrah neighbourhood in East Jerusalem are also facing eviction by Israeli authorities, heightening tensions.

Adding to the tension, Israel marked Jerusalem Day on Monday, when the country commemorates its annexation of East Jerusalem during the Six-Day War of 1967. Palestinians see East Jerusalem as a potential capital of any independent country and contest Israel's claim.

In an effort to minimize violence, Israeli authorities have banned traditional parades to mark the day by Jewish groups from going through the Old City and to the Temple Mount.

The United States expressed concern about the "unacceptable escalation" in the region and called for de-escalation from all parties to the conflict, according to State Department spokesman Ned Price.

The US embassy in Israel banned its staff from spending any time in the Old City until Sunday, while staff in the rest of Jerusalem were advised to stay home between 7 pm and 8 am every night until then.

The situation has prompted multiple calls from around the world for both sides to find some way to restore calm.

UN Secretary General Antonio Guterres called on Israel to exercise "maximum restraint," according to a spokesperson.

An emergency meeting of the United Nations Security Council on Monday evening however ended without a joint statement condemning the violence and expressing concern about possible evictions, due to opposition from the US, according to diplomats.

In Washington, Secretary of State Antony Blinken said he was "deeply concerned" about the rocket attacks.

But he noted: "Even as all sides take steps to de-escalate, Israel, of course, has a right to defend its people and its territory from these attacks."

The European Union's lead spokesperson for foreign affairs and security policy urged an immediate stop to "the significant upsurge in violence" in the occupied West Bank, including in East Jerusalem as well as in and around Gaza.

"We reiterate our call on all sides to engage in de-escalatory efforts," he added.

Turkey will do "everything in its power to mobilize the entire world, first and foremost the Islamic world, with a view to stopping the terror and occupation carried out by Israel," he said, according to the presidency.