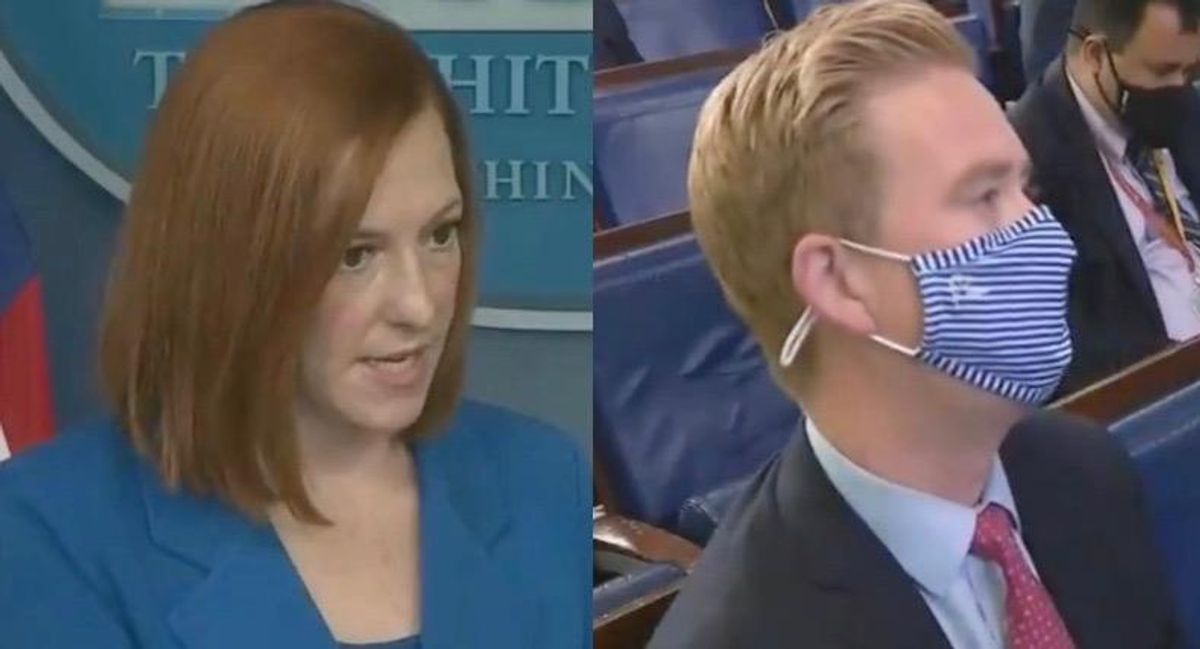 Doocy asked many questions Monday afternoon, insisting that American workers are staying home rather than returning to work because, in his opinion, "the extra unemployment benefits are so good."

Citing "the majority of economists, internally and externally," Psaki explained that in fact unemployment benefits are not keeping workers home.

"We don't see much evidence that the extra unemployment insurance is a major driver in people not rejoining the workforce," Psaki told Doocy, "our analysis shows that lack of vaccination...has an impact, childcare has an impact, schools reopening has an impact, but there's also the need to pay a livable working wage."

That "lack of vaccination" in large part is the direct result of Fox News' anti-vaxxer personalities like Tucker Carlson and Laura Ingraham.

Minutes later Doocy however answered his own questions, noting that Commerce Secretary Gina Raimondo "says the main reason that people are staying home is fear."

But then he asked, "How does the White House know that people are scared? What is that based on?" as if a worldwide pandemic spread through the air by infected humans, which has killed almost 600,000 Americans, is nothing to be afraid of.

That's when Psaki was again forced to explain some very basic issues to him.

"Well I think what she was referring to is the fact that there were there was a much lower vaccination rate, just a month ago, and that people are fearful about getting sick, they are fearful about whether they're going to have the conditions to be healthy, whether they can send their kids to a childcare center whether there is a childcare center. So those are all factors that are consistent with the examples and reasons I just provided."

Peter Doocy: How does the White House know that people are scared? Jen Psaki: People are fearful about getting sick, they are fearful about whether they're gonna have the conditions to be healthy, whether they can send their kids to a child care center. pic.twitter.com/Cmp3qvww8V
— Aaron Rupar (@atrupar) May 10, 2021