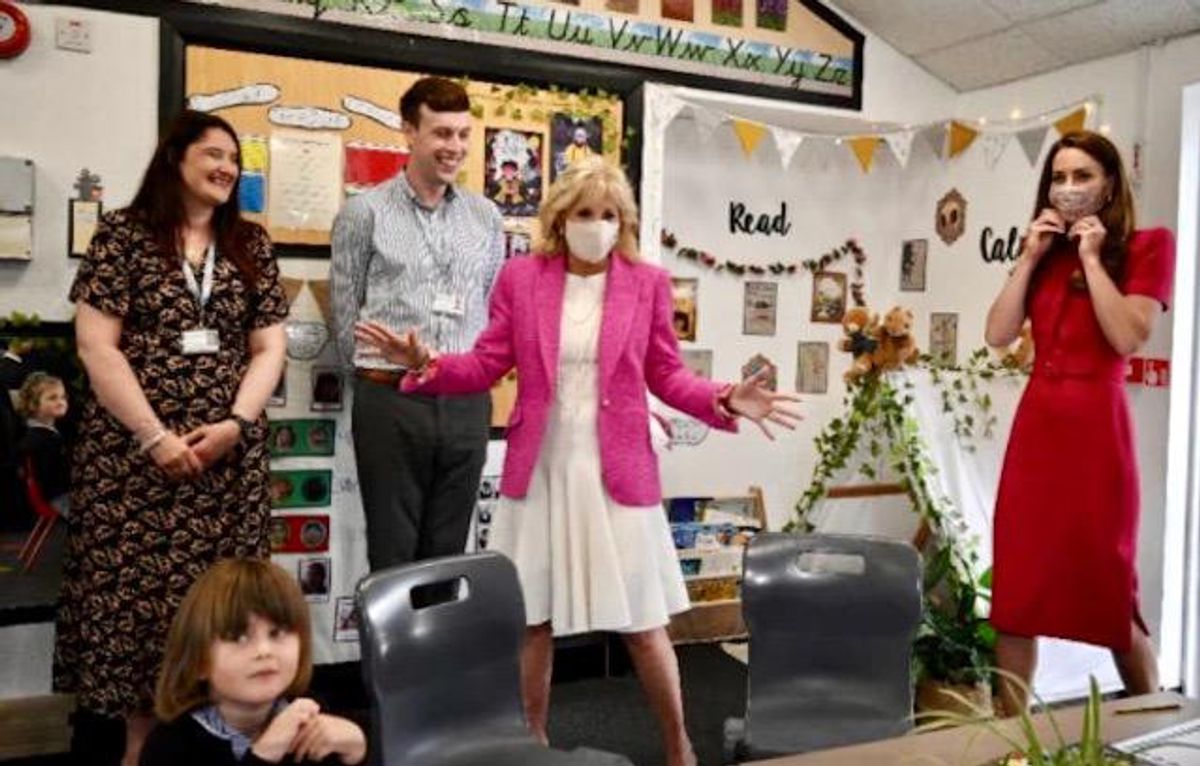 Young climate campaigner Greta Thunberg is not attending the G7 summit but she made her presence felt Friday as US First Lady Jill Biden and the Duchess of Cambridge visited a classroom of awed young schoolchildren.

Biden and Kate met for the first time on the margins of the summit in Cornwall, southwest England, touring a school in Hayle, near the summit venue at Carbis Bay.

"They're scared to death," Biden joked as she joined Kate in the classroom, as the well-drilled little ones sat in stony silence.

"It's the quietest class I've ever been to. How old are you?" Kate said.

The answer was four to five years old, and they are learning to read with the help of "Greta and the Giants" -- an adventure tale inspired by 18-year-old Thunberg's campaigning life story.

"Do you know this series?" Kate asked Biden, a former schoolteacher herself.

"I know Greta, of course," the first lady replied, before carrying a bowl of carrots outside as she and Kate met the school's rabbits, including a large bunny named Storm.

Thunberg was also an absent inspiration for older schoolchildren demonstrating in the Cornish town of Falmouth as part of the Fridays For Future movement started by the Swedish eco activist.

They were part of a crowd of some 100 demonstrators who denounced G7 nations for failing to do more against climate change. "There is no planet B," read one of their placards.

'Pasty point of no return'

A heavy police operation is keeping protestors well away from Carbis Bay, and Falmouth -- an hour's drive away on twisting Cornish roads -- is the designated venue for authorized demonstrations.

On the beach in Falmouth, another group of activists wearing giant paper mache heads of the G7 leaders tussled over a Covid-19 vaccine syringe, part of an action to highlight charity Oxfam's push for rich nations to waive intellectual property for vaccines.

A knot of activists from the climate action group Extinction Rebellion did make it past the security cordon to stage a protest on the beach at St Ives, near Carbis Bay, watched by a Royal Navy offshore patrol vessel.

Their protest featured knitted versions of one of the county's most famous culinary exports, the Cornish pasty, with one featuring the words "Almost pasty point of no return".

Climate change and protecting biodiversity are major topics this weekend for the G7 leaders, led by Biden's husband, US president Joe.

Queen Elizabeth II and other royals, including Kate and her husband, Prince William, were due later Friday to hold a reception with the leaders at Cornwall's Eden Project, which showcases the world's ecological riches.

The Bidens are then due to visit the queen at Windsor Castle west of London.

"That's an exciting part of the visit for us," the first lady said on Thursday. "We've looked forward to this for weeks and now it's finally here. It's a beautiful beginning."