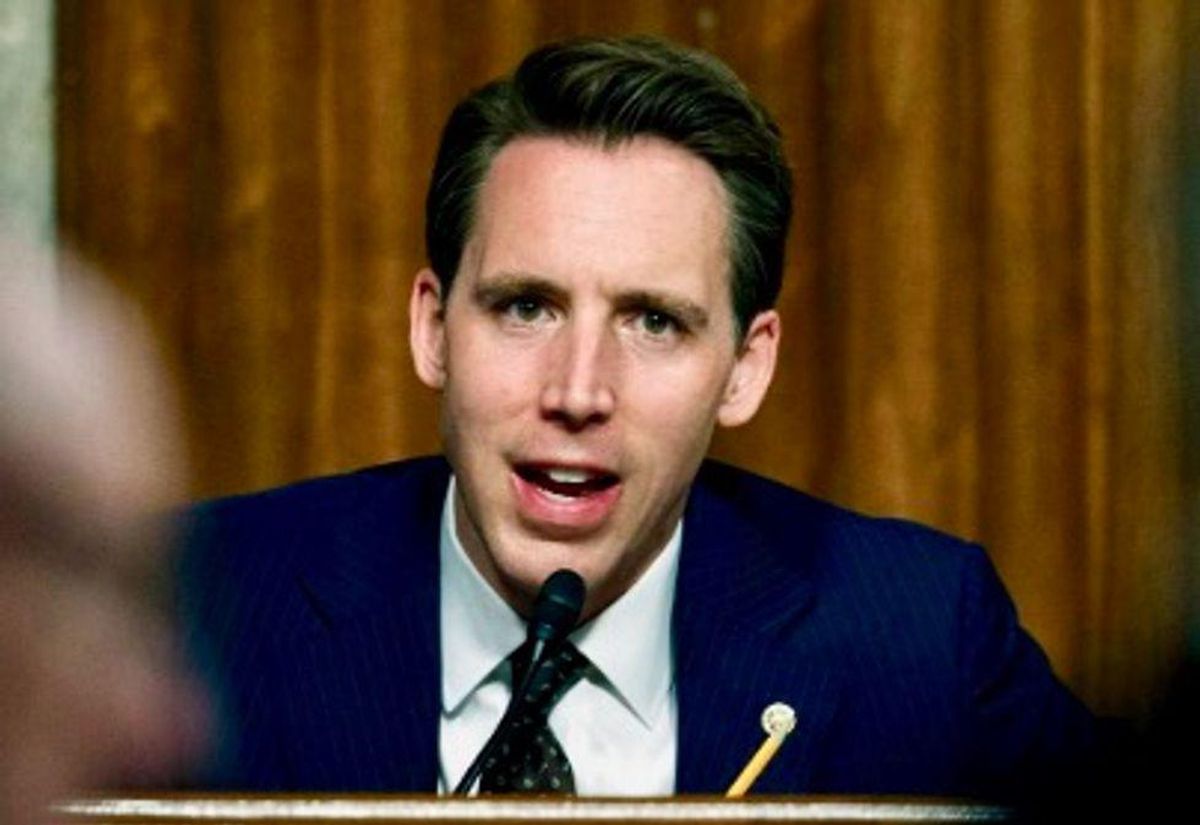 Donald Trump is no longer president, but the American people are still stuck in a state of malignant normality that his presidency brought into being.

Psychologist John Gartner describes such a state of being this way:

Malignant normality is when a malignantly narcissistic leader takes control of society and gradually changes reality for everyone else. So their crazy internal reality becomes enacted in the lived true external reality of that society. This is how a leader can come in and change the mores of their society.

In his role as national cheerleader and secular priest, President Biden is trying to provide moral leadership and healing for a traumatized nation, still shell-shocked by the Trump movement's continuing assault on democracy and society.

Biden's efforts have provided only short-term relief. The neofascist threat is escalating; Biden and the Democrats have shown themselves largely impotent against it. The coronavirus pandemic is now resurgent because of a new variant and Trump's followers' refusal to be vaccinated.

For these and many other reasons America — most notably, extreme wealth and income inequality and the global climate crisis — is becoming a dystopia. The collective emotional state of many Americans, or at least those who are paying attention and still care, is frustration and unease.

Malignant normality creates a playground for fascism and other forms of right-wing maleficence. The Jim Crow Republicans and other elements of the white right are taking advantage of this broken America to escalate their attacks on free speech, reason, truth, reality, human and civil rights and multiracial democracy by weaponizing the nearly meaningless term "critical race theory." (Yes, the term has a real meaning in academic discourse, but not as bandied about by Republicans in 2021.)

For the likes of Sen. Josh Hawley, the notorious Missouri Republican, such a crisis is a dream opportunity. Last week, Hawley proposed a bill called the Love America Act of 2021, which would deny federal funding to schools that teach the real history of America and the centrality of racism and white supremacy to the country's origins. The key text of this document reads:

RESTRICTION ON FEDERAL FUNDS FOR TEACHING THAT CERTAIN DOCUMENTS ARE PRODUCTS OF WHITE SUPREMACY OR RACISM — … [N]o Federal funds shall be provided to an educational agency or school that teaches that the Pledge of Allegiance, the Declaration of Independence, or the Constitution of the United States is a product of white supremacy or racism.

Hawley's "Love America" bill is not a joke, although it might sound like one. It is a statement of shared principles and loyalty to an anti-democratic, racial-authoritarian movement that is winning victories all over the United States.

For example, Florida Gov. Ron DeSantis is now mandating thoughtcrime surveys to determine the political beliefs of teachers and students in public colleges and universities.

Florida has also "banned" the teaching of "critical race theory" in public schools, and will permit — in practice, this may mean encourage — students to record classes without the knowledge or consent of their teachers. This potential surveillance is an obvious form of intimidation or threat against intellectual freedom, and specifically targeting teachers and other education professionals who are perceived as "liberal" and therefore "unfair" to conservatives.

... the requirements removed from the state's curriculum include two speeches by Martin Luther King Jr., any mention of Latino labor organizers Cesar Chavez and Dolores Huerta, and any mention of Thomas Jefferson's long-term relationship with Sally Hemings, an enslaved teenage child who bore six of his children. The bill bars any use of the New York Times' 1619 Project and "prohibits teaching that slavery was part of the 'true' founding of the United States" and removes the requirement to study the "history of white supremacy, including but not limited to the institution of slavery, the eugenics movement, and the Ku Klux Klan, and the ways in which it is morally wrong."

Tennessee has proposed fining school districts at least $1 million if a teacher "willingly violates" state laws against discussing racism, white privilege or sexism in class. Education Week reports, "Teachers could also be disciplined or lose their licenses for teaching that the United States is inherently racist or sexist or making a student feel 'guilt or anguish' because of past actions committed by their race or sex." Similar forms of censorship will be imposed in Oklahoma, where "educators could have their teaching licenses suspended or revoked and schools could lose accreditation if an investigation finds evidence that they taught about racism and sexism in ways that violated the law." Parents in that state will be allowed "to inspect curriculum, instructional materials, classroom assignments, and lesson plans to 'ensure compliance.'"

These attacks on the teaching of actual history are an Orwellian attempt to control both the present and the future in order to remake America as an apartheid regime. Realpolitik is also in play here: Facing changing demographics and political unpopularity, Republicans seek to use a larger culture-war strategy to win elections and hold onto power by any means possible.

White supremacists and other right-wing ideologues, in the longer view, want to destroy public education and replace it with their own propaganda indoctrination program. One important element is "racial erasure," in which the truth about American history is replaced with fantasies of white innocence, white nobility and white supremacy.

As Clint Smith writes in the Atlantic, for many so-called conservatives, "history isn't the story of what actually happened; it is just the story they want to believe. It is not a public story we all share, but an intimate one, passed down like an heirloom, that shapes their sense of who they are. Confederate history is family history, history as eulogy, in which loyalty takes precedence over truth."

Perhaps most important, the right-wing moral panic over "critical race theory" is a way to erase from public memory the struggle waged by Black Americans for centuries to defeat white supremacy in its various forms. To that point, chattel slavery and the Jim Crow regime were America's native forms of fascism. Black people defeated those forces and in doing so saved American democracy from its own worst impulses. To erase the Black Freedom Struggle is to make the case that American fascism will be victorious and that resistance is futile.

It is also crucial to understand that America's state of malignant normality is not isolated or unique, but is part of a neofascist attack by the global right on multiracial and multiethnic democracy around the world. As de facto spokesman for the American white right, Fox News host Tucker Carlson has taken a pilgrimage to Hungary, now under the one-party rule of Viktor Orbán, who has become a role model for the Jim Crow Republican Party and the American neofascist movement.

Orbán has created a fake democracy or "managed democracy" in Hungary, where elections still occur and tepid opposition is permitted, but in practice he can remain in power indefinitely. He has silenced the free press, crushed any serious democratic opposition, encouraged political violence against his regime's "enemies" and attacked colleges, universities and other centers of learning. The obvious goal is to silence dissent and produce obedient and compliant citizens who do not seek to exercise critical thinking or speak back to power.

In an essay for Vox this week, Zack Beauchamp discusses the larger significance of Carlson's pilgrimage to Budapest:

In his Monday monologue, Carlson told his listeners that they should pay attention to Hungary "if you care about Western civilization, and democracy, and family — and the ferocious assault on all three of those things by leaders of our global institutions." He tweeted out a friendly photo with Hungarian Prime Minister Viktor Orbán and is confirmed to speak at a government-supported conference in Budapest on Saturday. ...
[R]ight-wing observers, typically social conservatives and nationalists, see Orbán's willingness to use state power against the LGBT community, academics, the press, and immigrants as an example of how conservatives can fight back against left-wing cultural power. They either deny the right-wing populist and national-conservative political party Fidesz's authoritarian streak or, more chillingly, argue that it's necessary to defeat the left — a chilling move at a time when the GOP is waging war on American democracy, using tactics eerily reminiscent of the ones Fidesz successfully deployed against Hungary's democratic institutions.

Beauchamp observes that the "Republican turn against democracy" and the American right's growing interest in Orbán's Hungary, expressed with unusual frankness and eloquence by Rod Dreher of the American Conservative, "is in significant part fueled by the right's sense of leftist ascendancy — heightened by electoral defeats in 2008 and 2020 and strengthened by defeat in culture war battles like same-sex marriage":

This, ultimately, is what makes Carlson's pilgrimage to Budapest so worrying. The Fox host's massive following gives him unusual power to set the terms of the conversation on the right; when he talks, Republicans from Trump on down listen. His bear hug embrace of Orbán could not only bring the Dreher view out into the open but also strengthen its influence over the GOP.
Republicans today aren't directly imitating Orbán; they have their own anti-democratic playbook, drawn from all-American sources. Carlson's active embrace of Hungary's strongman risks making that connection more direct, giving Republicans more ideas for how to seize control and a more powerful sense of justification in doing so.

For those who believed that Biden's election could clear the haze and wake the American people up from the living nightmare of the Trump regime, these last seven months have been increasingly painful. And now the pandemic's third wave arrives as a gut punch to them as well. Biden and other Democratic leaders still appear obsessed with "bipartisanship" and to this point have refused to act with the "urgency of now" to fight back against Republican attacks on Black and brown people's right to vote. Even under Attorney General Merrick Garland, the Department of Justice seems to be protecting Donald Trump instead of investigating and prosecuting him for his crimes against democracy. The overall effect is like being smothered.

Conditions are likely to get worse — perhaps much worse, with Republicans likely to recapture one or both houses of Congress in 2022 and Trump likely to return as a presidential candidate in 2024 — before they get better.

To survive and triumph over American neofascism Americans' well of endless optimism must be fortified with something more durable and realistic, such as the formula suggested by Italian philosopher and activist Antonio Gramsci: "optimism of the will and pessimism of the intellect." In Gramsci's "Prison Notebooks," he wrote: "The crisis consists precisely in the fact that the old is dying and the new cannot be born; in this interregnum a great variety of morbid symptoms appear."

That is precisely where Americans find themselves now: The waking nightmare of the Age of Trump, from which we have not awakened, is just such a "morbid symptom." Recognizing that may make it possible to return to full political and social consciousness, and begin the real work of repairing and rebuilding American democracy.