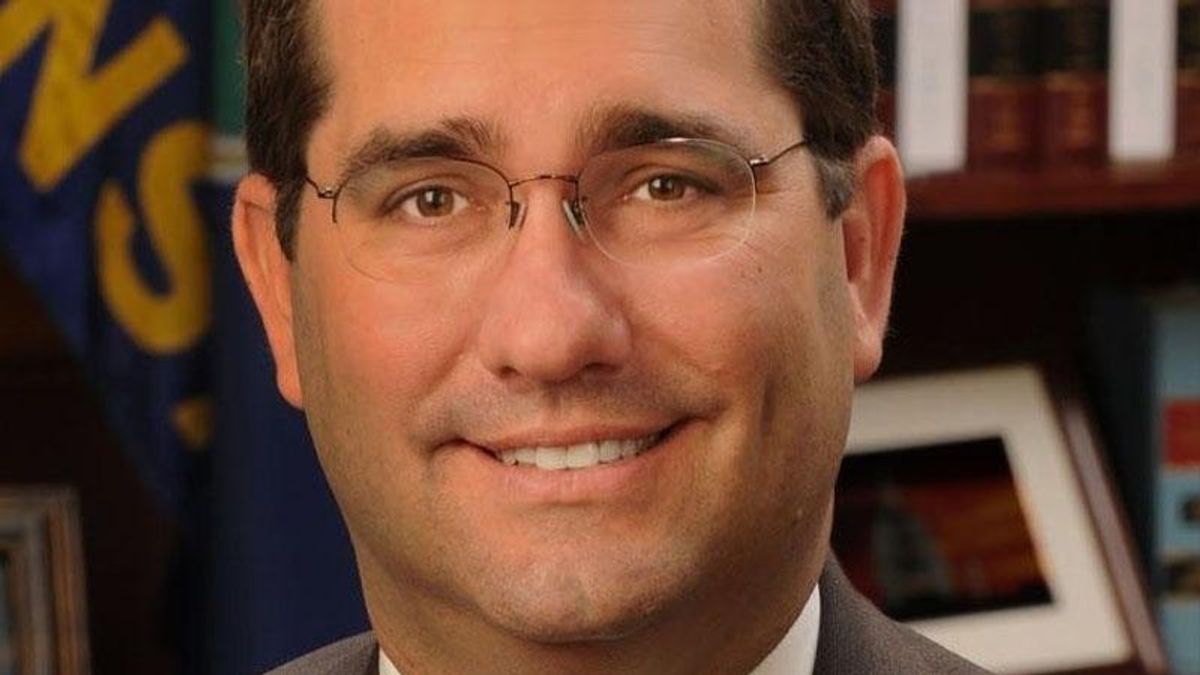 He's tall. He's folksy. He has a decent chance of becoming the next governor of Kansas. And he has a distressing history of playing footsie with fascism, catering to the worst impulses of his party. Sure, the A.G. is the state's “chief legal officer and top law enforcement official." But Schmidt, shall we say, goes above and beyond.

Item one: Schmidt joins a brief supporting a Texas lawsuit that could overturn the 2020 presidential election and the will of a clear majority of Americans. The U.S. Supreme Court quickly rejects the case, but the implications are staggering.

Item two: A Jan. 6 demonstration at the U.S. Capitol turns into an attempted insurrection, delaying the counting of electoral votes. Robocalls promoting the march were placed by the Rule of Law Defense Fund, of which Schmidt was a former director. He left its board in August 2020.

Item three: As reported last week, two of Schmidt's top lieutenants attend a conference in September 2020 where discussion includes “war games" in response to a potential Biden win. The conference was, incidentally, organized by that same Rule of Law Defense Fund.

Item four: After Douglas County District Attorney Suzanne Valdez pledges not to enforce a law that led to the cancelation of voter registration drives across the state, Schmidt promises to do so instead. His “election integrity" rhetoric furthers the Big Lie that election malfeasance is a serious problem.

Item five: Schmidt's office agrees to pay $1.9 million in legal costs to the ACLU and associated lawyers for their challenge to former Secretary of State Kris Kobach's signature (and unconstitutional) voter ID law. Schmidt had defended the law after Kobach lost an embarrassing trial.

What do all of these items have in common? They support undemocratic goals. They either directly prop up disgraced former President Donald Trump or bolster the narrative behind his insane efforts to overturn the last presidential election.

We now know that Trump came closer to accomplishing his aims than anyone suspected at the time. Those who enabled this behavior bear a portion of the responsibility. As you scan through the list above, ask yourself what portion Schmidt might bear.

The attorney general has been quick to respond to bad press with soothing comments. After the Texas lawsuit was shut down, he said “it is time to put this election behind us." The insurrection was “sickening, shameful, inexcusable and counterproductive," and the robocalls at issue earned his “disappointment and strong disapproval," according to a spokesman. The “war games"? According to the same spokesman, they were simply to “discuss potential legal responses of state attorneys general offices to regulations or similar federal government actions that were likely to occur in a potential Biden administration." As to the voter engagement efforts, “citizens throughout our state deserve assurance that state election integrity laws will be enforced." And so on.

A segment of Republican leaders no longer believe their party can consistently win nationwide, majority votes. Its policies are unpopular with broad swaths of Americans. And they have little desire to revamp its platform or appeal to folks who don't look or think as they do. So they have instead decided to tear down our system of elected government. This means draconian voting restrictions, legislatures possibly overturning election results, and if worse comes to worse, the encouragement of armed goons to do a strongman's bidding.

Some Republican leaders have resisted this. A tiny minority truly believe it and are clinically bonkers. But many, many others throughout the party have found it more convenient to go with the flow. These folks have long-term career paths and perhaps see this as a bit of harmless flirting on their way to higher office.

Schmidt has a clear route to the GOP nomination for Kansas governor. He doesn't have to go with the flow anymore. He can — and should — move his foot away from under the table, stand up and speak truth to those in his party. Trump did not win the presidency. There is no meaningful election fraud, in Kansas or anywhere else. And Republicans should not welcome members who seek to overturn democratic elections.

We need his voice not to make excuses but to defend truth.