When Attica Scott saw the news that Georgia state Rep. Park Cannon had been arrested at the state Capitol while protesting voting restrictions, it quickly brought Scott back to the fall.

Scott, herself a Black woman lawmaker in the Kentucky legislature and author of a police accountability bill in honor of Breonna Taylor, was arrested in September during a Black Lives Matter protest following the news that no police officers would be charged criminally for the death of the 26-year-old emergency room technician.

“This is what happens to us as Black women, time and time again, who are in elected leadership," Scott said.

A growth in Black women's representation in statehouses and other levels of government in recent years — powered in part by community activists seeking more legislative action to address racial and gender inequities — has increased their political power. Black women elected officials often are the ones who challenge policies over issues like police killings, racist monuments and voting restrictions. It has also led to increasingly visible resistance, with several Black women being arrested or facing criminal charges in the midst of their work in statehouses or in their communities.

Black women elected officials who have been on the receiving end say it's an effort to silence them.

“We're seen by law enforcement, we're seen by other elected officials, as vulnerable. But we're also seen as people who carry respect and support from our communities," said Scott, whose charges related to her arrest were later dropped. “When they arrest us, it's to send a message to our communities that we can come for the very people that you put in offices to speak for you and to be your voice."

In Atlanta on Thursday, Cannon knocked on the door of the office of Georgia Gov. Brian Kemp to protest his signing of a sweeping law that includes restrictions on mail-in voting. The video and photos that circulated of Cannon showed state troopers taking her away, her arms behind her back.

L. Louise Lucas in Virginia watched video of the arrest and, like Scott, also was brought back to last summer. That's when the state senator was charged with a felony in connection with the partial dismantling of a Confederate monument months earlier. Lucas decided to turn herself in to the sheriff's office after she was served with a warrant for her arrest to make sure law enforcement would be unable to physically put handcuffs on her.

“It was pretty much a flashback for me," Lucas said. “It's just another example of how the system treats Black women who finally get into a position to be a voice for constituents and how there's such a concerted effort to try to silence our voices."

The imagery is also not new. In 2018, then-state Sen. Nikema Williams — now a member of the U.S. House from the seat formerly held by civil rights leader John Lewis — was also arrested at the Georgia Capitol after she joined a protest inside the rotunda over voting access. Like Cannon, Williams was taken away by law enforcement officers, detained with her arms behind her back. 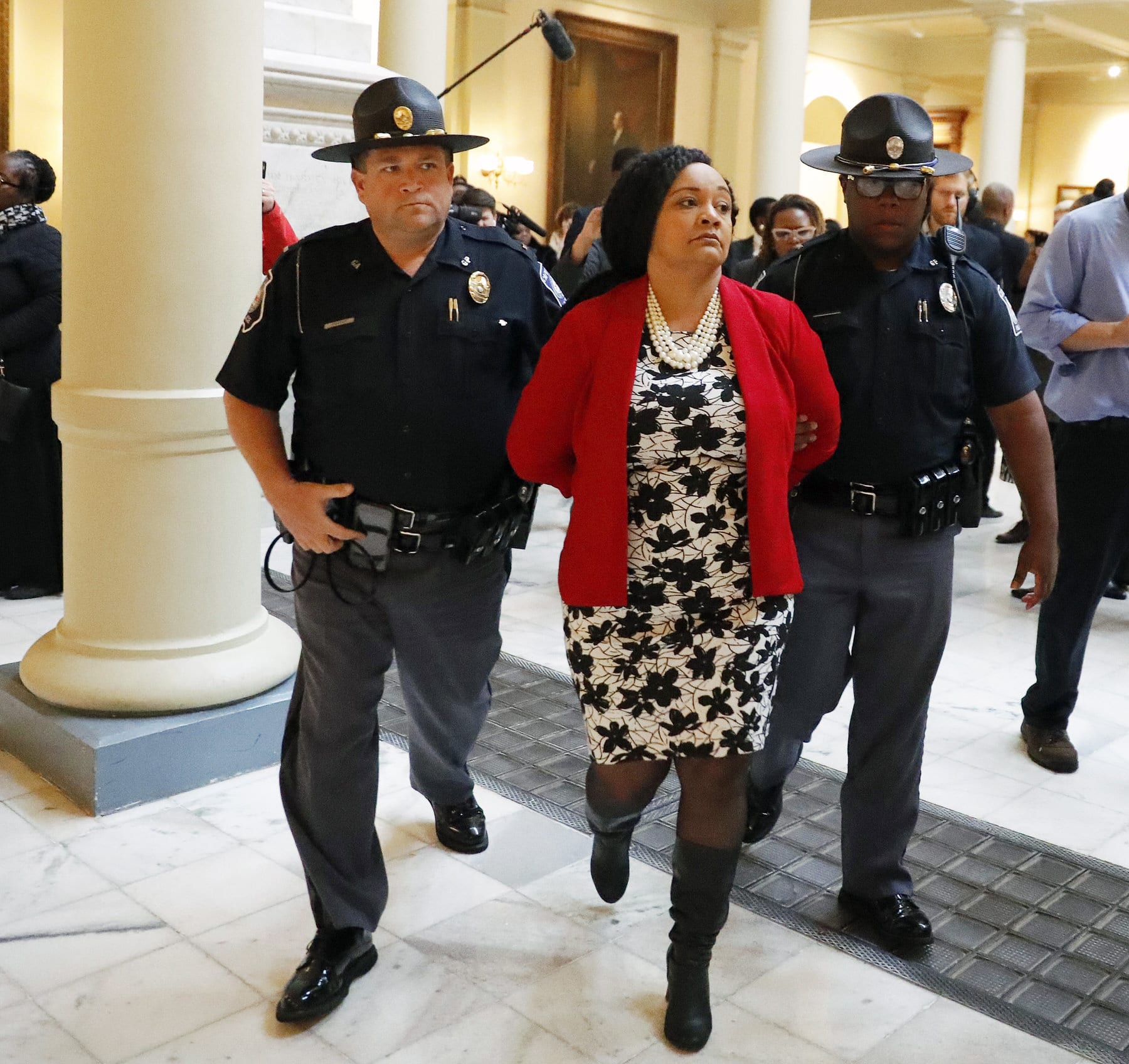 Georgia state Sen. Nikema Williams is arrested during a protest at the state Capitol building on November 13, 2018.

There is a significance to these arrests, which extend beyond statehouses, said Jennifer Driver of the State Innovation Exchange (SiX), which works with state lawmakers to pass what the group describes as progressive public policy. Olivia Pearson, a Black woman city commissioner in the town of Douglas, Georgia, has been arrested twice in connection with helping people trying to vote.

“Black women repeatedly put their physical and their mental space on the line to protect some form of democracy for this country," Driver said. “Regardless, white supremacy still can be upheld."

Nadia Brown is an associate professor of political science at Purdue University who studies Black women's politics, intersectionality, gender and politics. She said there are parallels to the history of Black women fighting for voting rights, including activist Fannie Lou Hamer, who was arrested in 1963 and beaten.

“Thank God this didn't happen to Representative Cannon, but it was a very essential reminder that Black women's bodies are a site for state-sponsored violence," Brown said.

Krystal Leaphart is operations and policy associate of the National Organization of Black Elected Legislative Women (NOBEL Women). The organization partnered with SiX for a report released this month that showed while Black women remain underrepresented in statehouses, their numbers hit new records every year. There are 39 Black women in the Georgia legislature, the most of anywhere in the country. But most state lawmakers around the country are still White and male.

“To most people in those positions, seeing so many Black women rise up is a little intimidating," said Leaphart, also a Black woman. “It's not the norm, but the norm hasn't been working for us."

Scott in Kentucky said it shows that there must be more efforts from elected officials to protect Black women and protest rights.

“You become a target because you dare to speak out for justice, you dare to do what Congressman Lewis called us to do, which is get in good trouble. You dare to demand accountability and transparency from even the highest offices of government in your state," Scott said. “Then what happens is you get retaliated against. You get unjustly arrested, and it's a form of intimidation, not only of you, but of the people you represent."

Last November, a judge dropped charges against Lucas in Virginia. Lucas, the highest-ranking Black woman legislative leader in the Virginia statehouse, said she and other Black woman elected officials will not be intimidated by the actions of law enforcement.

“We will not be silenced," she said. “It doesn't make any difference how many times they try to arrest us, we're going to continue to speak out for what's right." 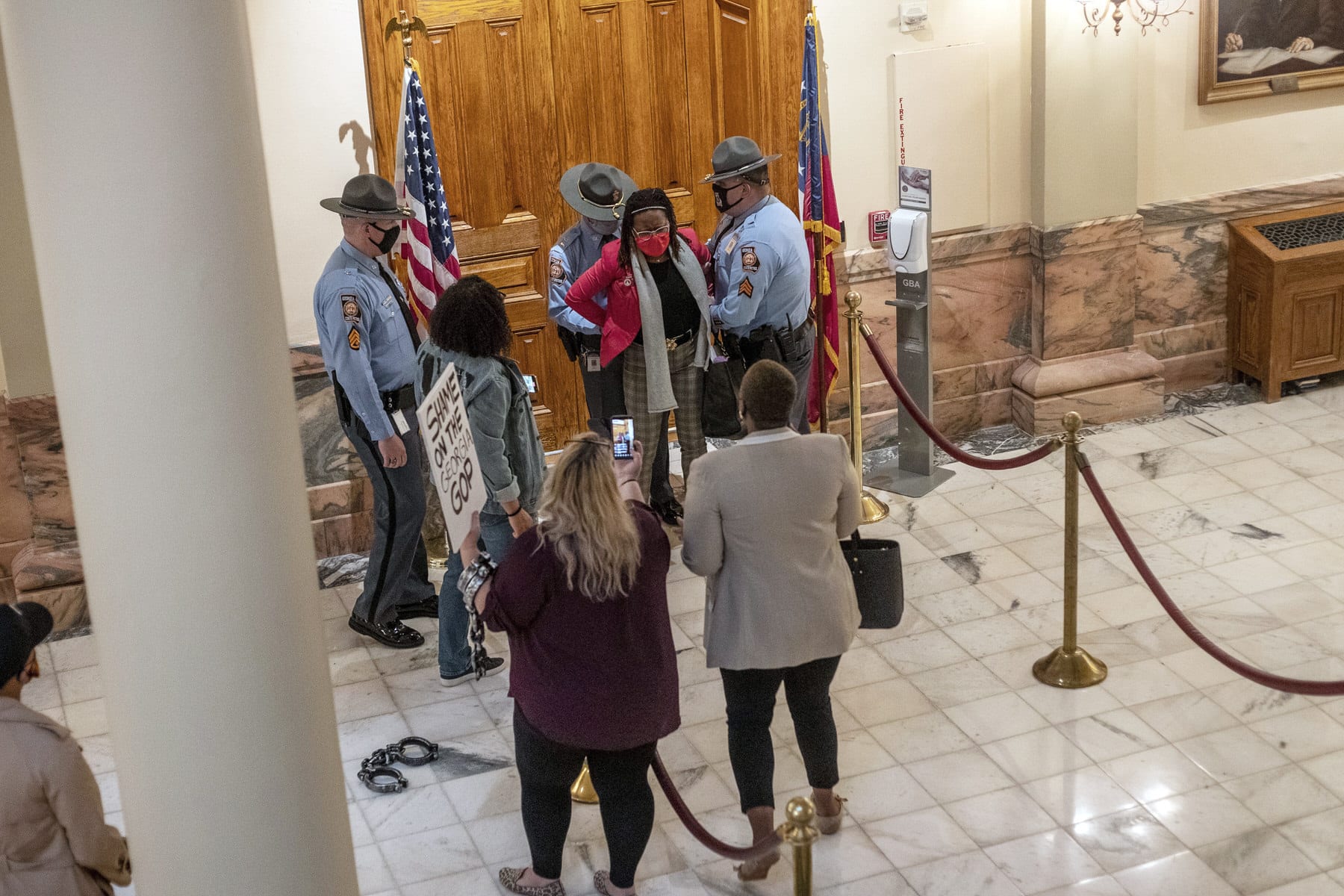 Georgia state Rep. Park Cannon is placed in handcuffs by Georgia troopers at the Capitol on March 25, 2021.

Hours after her arrest, Cannon posted on Twitter that she had been released from jail. On Friday, the National Black Justice Coalition, a major civil rights group, demanded that charges against Cannon be dropped.

Cannon did not respond to a request for comment from The 19th on Friday, but she wrote in a Facebook post that she was seeking privacy for herself and her family “as I heal from this experience, so that I may continue this fight again."

In the post, Cannon added that she would continue to oppose the legislation that led to her arrest.

“I will not stand by while our voting rights are threatened across this state, the state I swore an oath to represent with integrity, honesty, and respect for the millions of people who live and work in this community," she wrote.