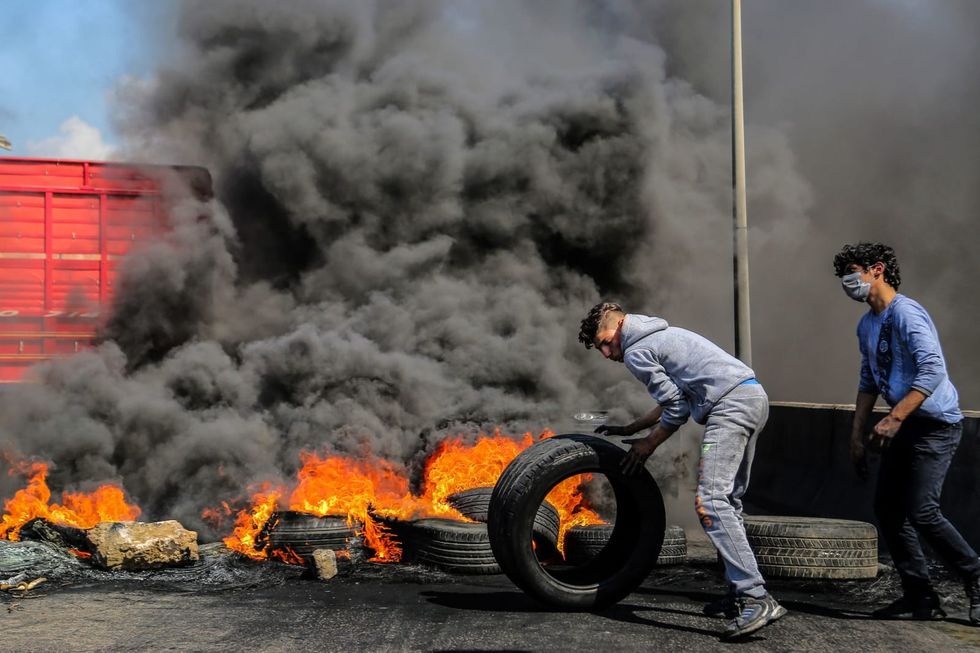 Protests in Lebanon - Anti-government activists burn tires to block a main highway that connects capital Beirut to south Lebanon, during a protest against the country's deepening economic crisis. - Marwan Naamani/dpa

Angry Lebanese protesters blocked Monday major roads in the capital Beirut and across the country in what they declared a "day of rage" against the political stalemate and a deteriorating economic situation.

Burning tyres and sand barriers were used to block major roads leading to the capital, causing severe traffic jams and preventing many people from reaching their work and businesses.

"We will stay all night, as the situation is unbearable," said one protester.

The protests came as the Lebanese pound continued its dramatic fall against the dollar, which has led food prices to spiral upwards.

The pound was trading over the weekend at nearly 10,500 against the dollar on the black market for the first time since 2019 when demonstrators took to the streets to protest against a corrupt ruling class in the country.

"This is an alarm bell to all Lebanese leaders that a social explosion is on its way," one protester in Beirut said.

Lebanese President Michel Aoun called on the army and security forces to intervene and open the blockaded roads throughout the country. Security forces have so far remained on the sidelines.

"The blocking of roads is unacceptable and the security and military agencies must carry out their full duties and enforce the laws without hesitation," Aoun was quoted as saying by the state-run National News Agency (NNA) after a high-level meeting.

But Army Commander General Joseph Aoun warned that the situation is dangerous and called on officials to take action.

"The whole country is suffering because of the economic situation, and just as the people are hungry, the military is also suffering and hungry, so what is it that the officials are waiting for?" he said.

He added that the army supports the right to freedom of expression as stipulated in the constitution, but would not tolerate attacks on public and private property, or anything to destabilize security in the country.

Some protesters made appeals on social media, calling on people to leave their homes and take to the streets, and join together to save Lebanon from total economic and social collapse.

Lebanon has been without a government since Prime Minister Hassan Diab resigned on August 10, days after a powerful explosion hit the port of Beirut. Diab has since been serving in a caretaker capacity.

Lebanon's prime minister-designate Saad Hariri, a veteran politician, has failed since October to form a new government due to political divisions among rival factions.

The current economic crisis is Lebanon's worst since its 15-year civil war that ended in 1990.