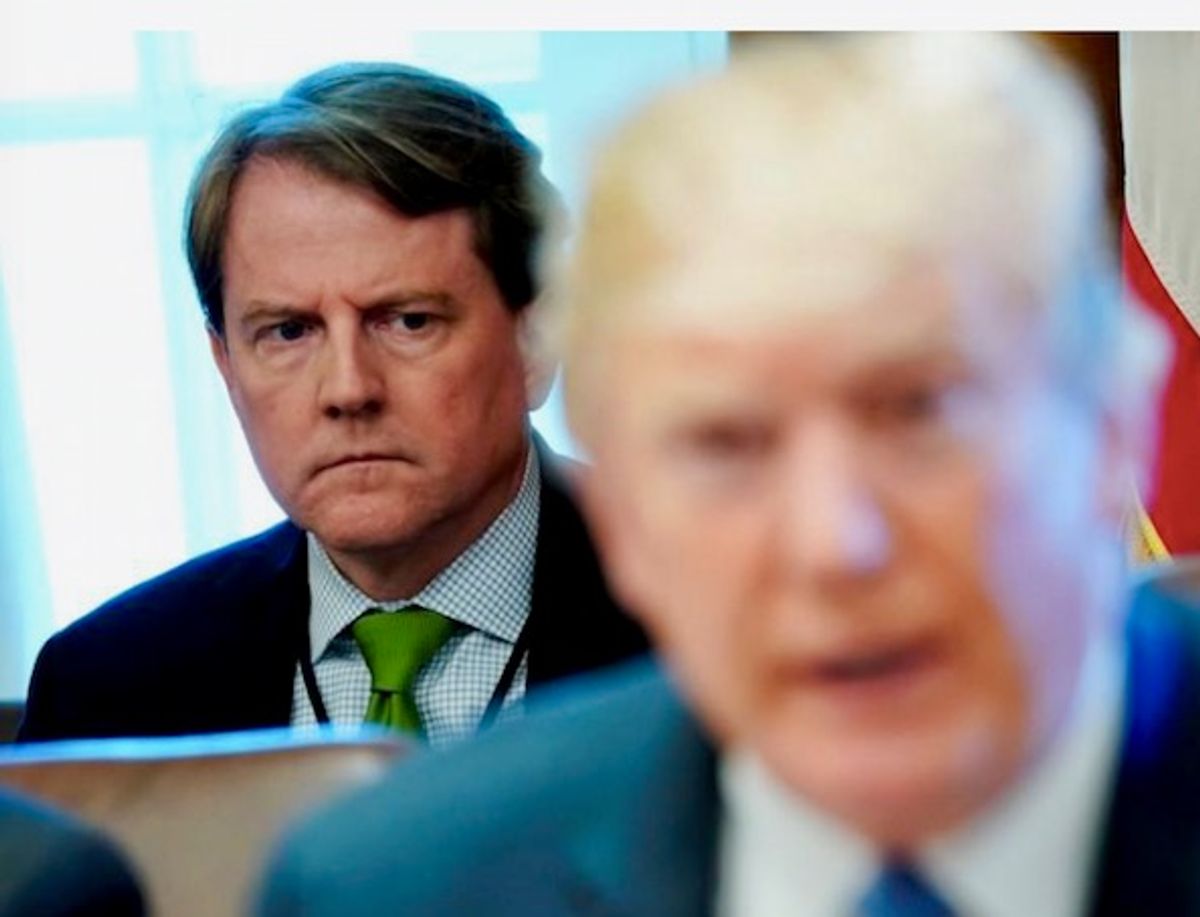 For 21 months, Republican Don McGahn served as White House counsel in the Trump Administration — a position he started in January 2017 (the month Donald Trump was sworn in as president of the United States) and held until October 2018. Now, four months into Joe Biden's presidency, the 52-year-old McGahn is getting ready to testify before the House Judiciary Committee. Legal experts Benjamin Wittes and Quinta Jurecic, in an article published by Wittes' Lawfare website on May 17, lay out some reasons why McGahn's testimony is important despite all the other things Americans have to think about during the Biden era.

"Americans can be forgiven if the testimony of Don McGahn in the context of the first impeachment of a former president is the last thing on their minds these days," Wittes and Jurecic explain. "A lot of water has flowed under the bridge since the Justice Department released the Mueller Report in April 2019 and the House Judiciary Committee sought McGahn's testimony in response. The coronavirus emerged, spread into a pandemic, and is now ebbing in some parts of the world and surging in others. President Trump was impeached not once, but twice. Rioters stormed the Capitol in an attempted insurrection. A new administration arrived in Washington, D.C….. Yet the settlement is important"

The legal analysts note that the House Judiciary Committee subpoenaed McGahn in 2019.

"The Committee subpoenaed McGahn shortly after release of the Report itself, framing the request for information as a key component of a nascent inquiry into whether Trump's obstruction of justice as described by (former Special Counsel Robert) Mueller merited impeachment," Wittes and Jurecic note. "That point, of course, is moot. While Trump's dual impeachments proceeded without McGahn's testimony, both proceeded on other grounds. Trump escaped impeachment on the matters discussed in the Mueller Report."

In 2019, Trump not only didn't want McGahn to testify — he encouraged his allies to flat-out ignore any subpoenas that came from Democrats in the U.S. House of Representatives. But now, the House Judiciary Committee will finally have a chance to question McGahn.

According to Wittes and Jurecic, "It's worth taking a step back and reviewing why the Committee cared about McGahn's testimony in the first place. For Mueller, McGahn was something of an unlikely star witness. The special counsel's office relied heavily on his testimony to understand Trump's efforts to obstruct the inquiry, to the point where the office began relaying essentially real-time requests for information to McGahn about Trump's actions — while McGahn was still serving as White House counsel."