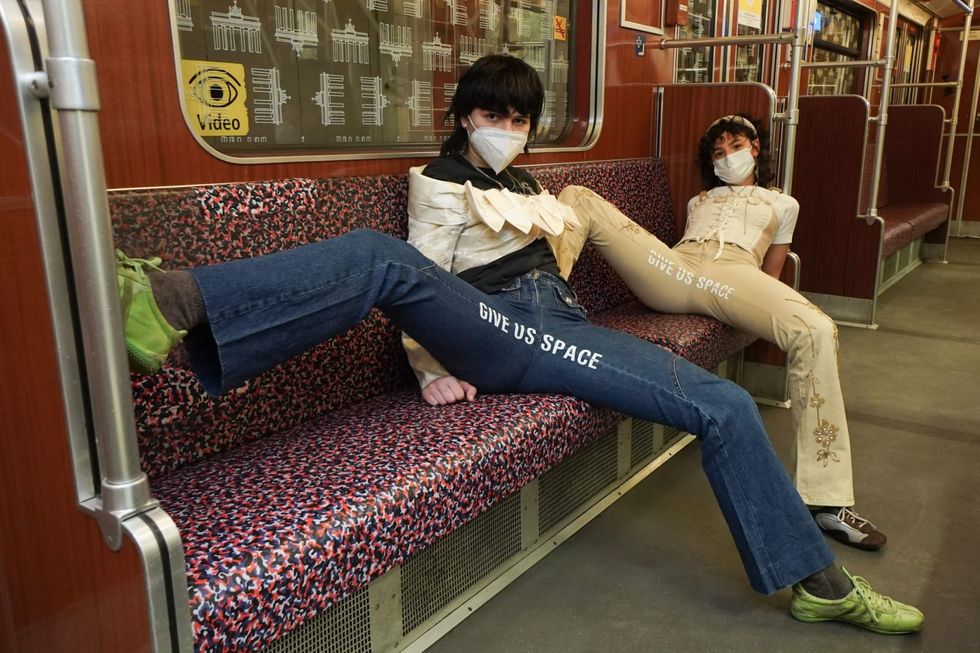 Berlin artists spread message against men taking too much space - Mina Bonakdar, left, and Elena Buscaino show off the messages they've printed on the crotch of their trousers on a Berlin subway car as part of their "Riot Pant Project" on gender. - Joerg Carstensen/dpa

Columnist Margarete Stokowski compared manspreading to dust when you're cleaning the house: "Once you start paying attention to it, you see it everywhere," she wrote for Der Spiegel in 2017.

It's still a problem on public transport in cities around the world, despite various campaigns - often featuring a cheeky slogan - asking men not to sit with their legs so far apart that they take up more than one seat. This unfortunate phenomenon is known as manspreading.

From New York to Madrid, Vienna and Berlin, men have been instructed by metro authorities to cut it out.

Berlin's metro service, known for its less-than-subtle approach, wrote on its Facebook page that there was no anatomical reason for manspreading and instructed travellers: "Knees together, you dicks!"

More recently, however, two Berlin-based art students have decided to take up the anti-manspreading mantle with the "Riot Pant Project."

To make their statement, Elena Buscaino, 26, and Mina Bonakdar, 25, printed slogans against male dominance on the crotch of trousers. The wearer can then flash the slogan at others by spreading their legs.

It's not just about bad manners on the train: It's about being considerate of others and equality, starting with the small things.

The two met at Berlin's University of the Arts in 2019 through a fashion and graphic design project about writing and clothing. They looked at marriage and divorce, and talked about sexism and feminism.

"We discussed sexism and feminism a lot," they say. Both are interested in gender roles and stereotypes, which led them to the question of how much space men occupy in society compared to women.

"Who has how much space in society?" they ask.

There wasn't a particular moment that led them to create the project.

"It happens every day," says Buscaino. "The frustration and anger were there before," adds Bonakdar.

Any sexualization around spreading one's legs goes away when the slogan is revealed, giving the wearer strength and protecting them. Beyond that, the trousers are also fun, and the two were encouraged by friends, who began to notice such behaviour for the first time.

Buscaino and Bonakdar so far have sold about a hundred or so of the trousers, which they buy at second-hand shops. They charge 40 euros per pair, or only 25 euros if people bring their own to be printed.

Britain-based artist Laila Laurel decided to confront the same issue of manspreading in a different way: Through the use of chairs.

Laurel came upon the idea of chairs after discovering The Everyday Sexism Project, a website set up by feminist and writer Laura Bates in 2012 to allow women to anonymously share experiences of sexism.

Laurel says that she spent an hour riding trains on Southern Rail between Brighton and Portslade to see examples for herself. "In such a short time, I found multiple cases," she wrote on her website.

Describing the project as a technical investigation that was not intended to be serious or hard-hitting, she says: "I think these chairs do give a physicality to an issue women face in quite a fun yet literal way, which is my overall main objective in this project."

The projects in Berlin and Britain both drew criticism online.

Buscaino and Bonakdar said that some people pointed out that the world has bigger problems right now than manspreading, while others said that feminism couldn't be taken seriously because of them.

But it's a question of where you can actually do something, says Buscaino. "One problem does not negate the other," she says, adding that the "Riot Pant Project" is part of a much larger debate.

Meanwhile, Laurel told the BBC that men are written to her and explicitly accused her of hating all men. This "couldn't be further from the truth frankly," the artist responded, according to BBC.

Buscaino and Bonakdar say their next step is to start a website.

While it would be nice if trousers with such slogans were no longer needed, they say, neither of them thinks it will happen anytime soon.

Republicans are in a panic over Joe Biden's popular American Jobs Plan.